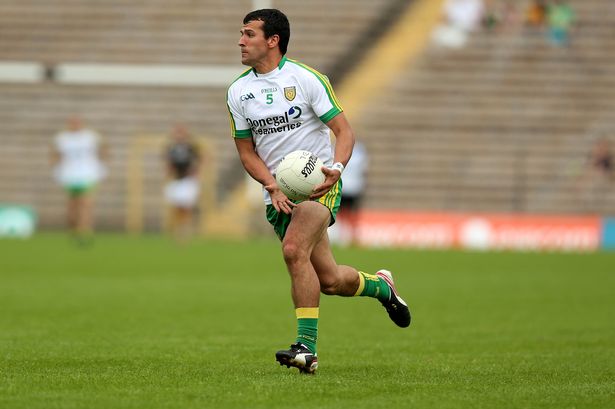 FRANK MCGLYNN IS in line to make his first appearance of 2018 for Donegal next Saturday night.

The 2012 Footballer of the Year nominee has been held aside Donegal’s opening three Allianz League Division 1 fixtures, as well as the four Dr McMcKenna Cup outings to date.

This coming Saturday Donegal take on Tyrone at Celtic Park at 6pm in the re-arranged final of the Ulster pre-season competition.

Neil McGee is also not so far away, while Paddy McGrath, who suffered a posterior cruciate ligament and has also suffered cartilage damage injury last August, is expected to see some action prior to the climax of the Division 1 campaign.

“They’re back training at the minute so hopefully Frank might be back for next weekend and Paddy is pencilled in for the last couple of league matches,” Donegal manager Declan Bonner said last night at Croke Park following Donegal’s 0-20 to 0-15 loss to Dublin, where Michael Murphy played for the final 15 m

“Paddy’s on target coming back from his knee injury. With Neil, we’re hoping he’s not too far away. That experience will be vital cause a lot of those young lads came of age out there against a very, very good Dublin side. They really are top class.”

Donegal have narrowly lost all three league fixtures this term with a 2-18 to 3-14 reversal against Kerry in Killarney, a 1-12 to 0-14 defeat in Letterkenny against Galway before last night’s upending against Dublin.

Kildare are Donegal’s next fixture in Division 1, with the game pencilled in for Fr Tierney Park in Ballyshannon on Sunday, February 25. Donegal then have to play Tyrone and Monaghan away and Mayo in Ballybofey.