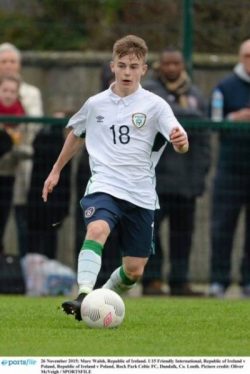 Marc Walsh and Ireland U17s to face Turkey this evening

Loughanure’s Marc Walsh is in the Republic of Ireland U17 squad that will face Turkey in Galway this evening.

Colin O’Brien’s Ireland team have two games against Turkey this week in preparation for March’s UEFA European Under 17 Championship Elite Round games in Poland.

Walsh moved to Swansea City last summer and is among the Irish squad for this week’s friendly double header.

“This is a big opportunity for the players,” O’Brien said.

“This is our last camp before the Elite Round next month and they are two important games for our development.

“Turkey are always formidable, they bring a high tempo game and will be a big test for us. The two games will be a challenge for everyone.

“There are places in the team up for grabs. We have had a home based event and a UK based event in preparation and watched plenty of players so competition for places is very high.”

Also included on the Irish panel is Seamas Keogh, a Sligo native who attends Coláiste Cholmcille in Ballyshannon.