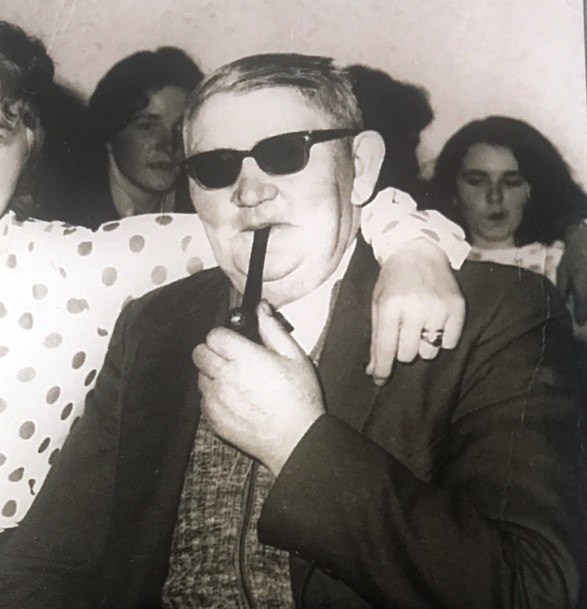 Top gear has the stig, America had the Indianapolis Motor Raceway track but none could keep up with Donegal’s “Paddy the Gate”.

In 1944 an early morning fire broke out in Rodden’s thatched pub on upper Main Street in Letterkenny, which was where Dillon’s Hotel is now.

Letterkenny Fire Brigade was called and arrived to fight the fire with a trailer drawn pump. They made down to a hydrant on the Main Street but still needed more water to fight the fire. The 17th batt of the Irish army was called in to help from Rockhill barracks. They assisted in getting more water from a well located in the backyard of what is now known as Blake’s Bar.

Paddy stepped in behind the wheel and the crew set off for Letterkenny. Paddy was concerned that the man that should have drove the fire engine that night would be reprimanded by his Chief for having a man too many on the fire engine on the journey to Letterkenny so thought it was best that he would disappear when he made the record run to the town and get a lift back to Derry on his own steam.

Thanks to the Fire Service Derry this week our motoring column retraced the journey that “Paddy the Gate” may have travelled to that call in 1944.

Before the Northland Rd. Station was built in the late 60s the Old Derry Station was on London Street near the Fountain where it still stands. We also located a photo of one of the Fire Engines used in Derry in the 40s and early 50s that may have been the tender that Paddy The Gate flew to Letterkenny to on the morning of the Fire. 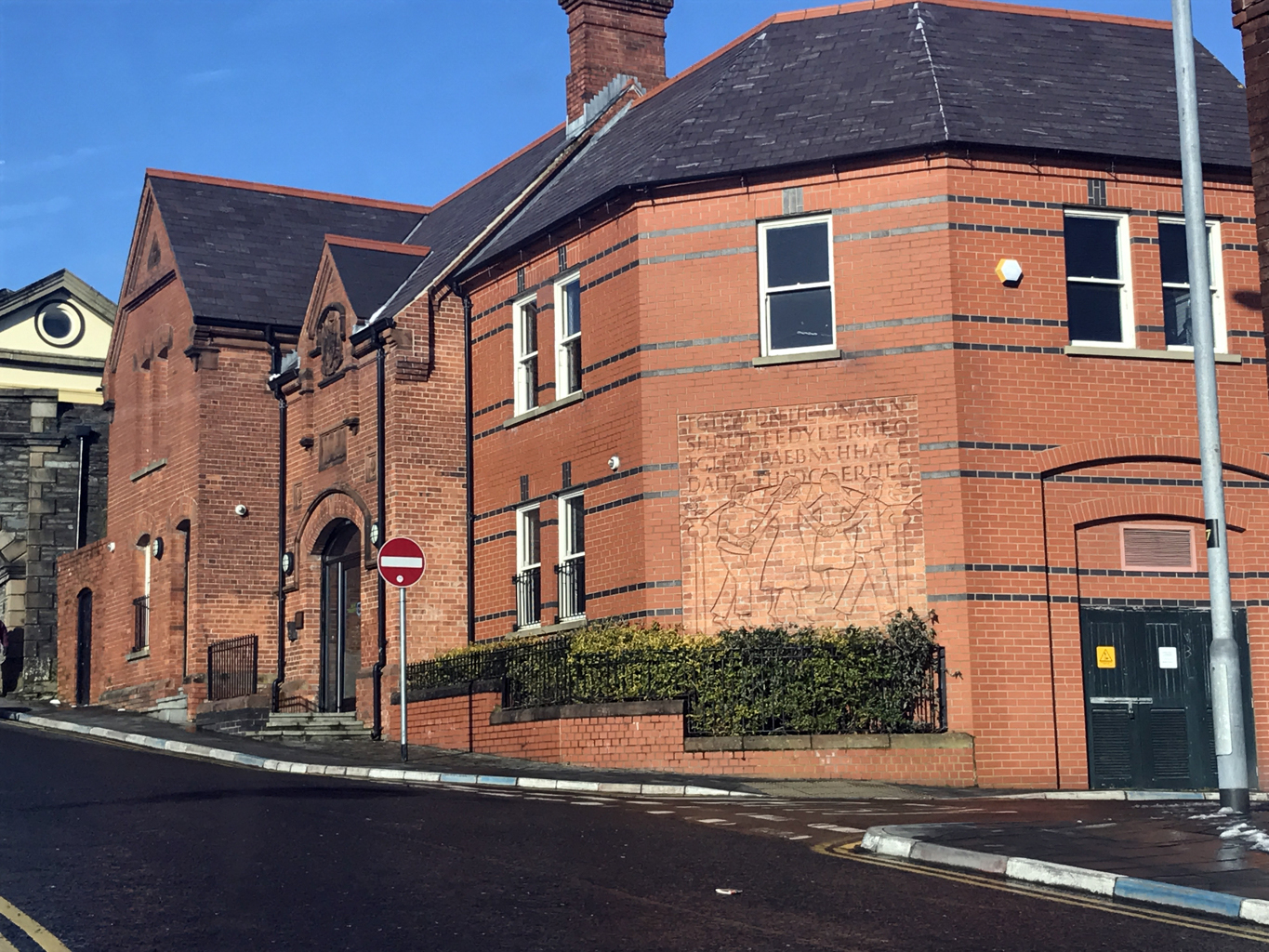 The Old Fire Station on London Street in Derry where the call to assist Letterkenny may well have come to in 1944.

A Dennis Whippet
The whippet was a six-cylinder petrol powered American or Canadian imported chassis that would have had its coachbuilding done by specialists in Fire Engine coachbuilding, a company called Dennis in England.

The Whippet six was a well-designed engine with full pressure lubrication and a seven-main-bearing crank. When the whippet six was first built it was taken to the Indianapolis Motor Speedway where it averaged 56.5 mph during a 24-hour endurance run, establishing a new American record for cars of that size.

If this was the Fire Engine that Paddy the Gate made the dash across the border in it would have been a sight to see and a sound to hear from that big six-cylinder petrol power plant as it powered its way to Letterkenny. 55 MPH doesn’t sound like much now but that would have been amazing speed to see on the roads in 1944 as the picture shows the fire engines were completely open with the driver and his crew exposed to the elements. 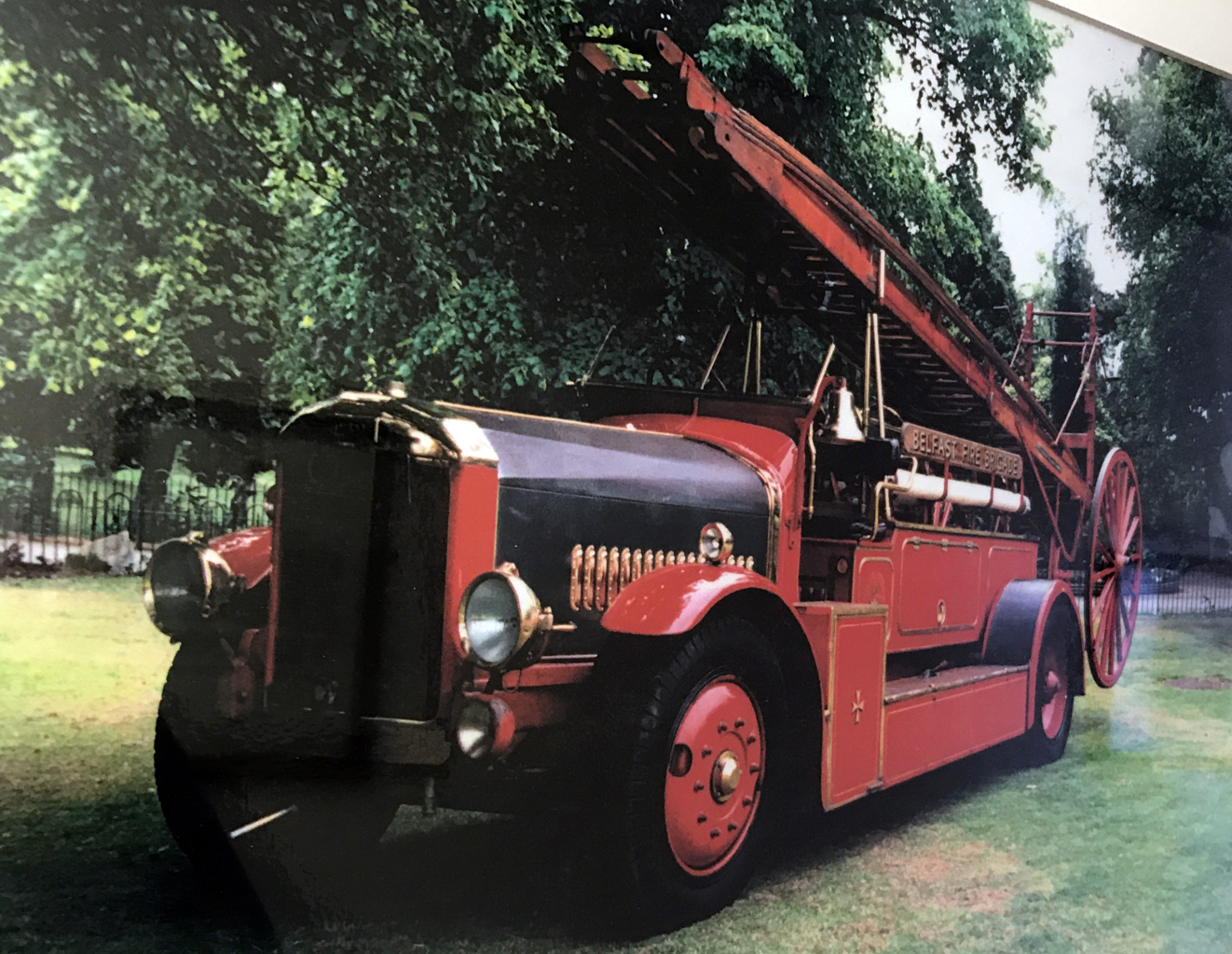 A Denis Whippet, possible the one Paddy The Gate drove from Derry to a Fire in Letterkenny in 1944 in record time.

The crew would have to sit sideways either side of the big escape ladder and would have had no seat belts so would they would have had to hold on tight to the fire engine as Paddy the Gate powered his way from Derry through the country roads of Donegal until he arrived in Letterkenny.

By the time the Chief Fire Officer arrived in Letterkenny that night he more than likely met one of his drivers Paddy the Gate as one of his fellow Letterkenny men smuggled Paddy back into Derry. This account of the night was given by both the late Jim Mc Glynn Station Officer in Letterkenny and Paddy The Gate in a project which the Donegal Council recorded some of the emergencies that Letterkenny Fire Service attended.

A big thanks to the Harkin family in Glendowan who managed to locate a great photo of Paddy The Gate for our motoring column this week, looking a ringer for the Italian racing driver Enzo Ferrari, both of who wore dark sunglasses, sadly as many would remember in Letterkenny Paddy The Gate’s glasses were not for style but his special blue tinted glasses had to be worn at all time because of the damage that Paddy received when working with lime for farming. 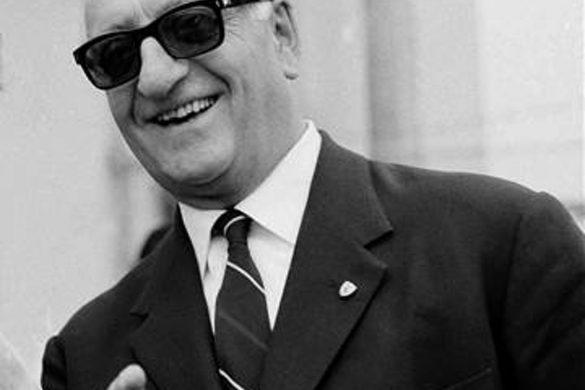 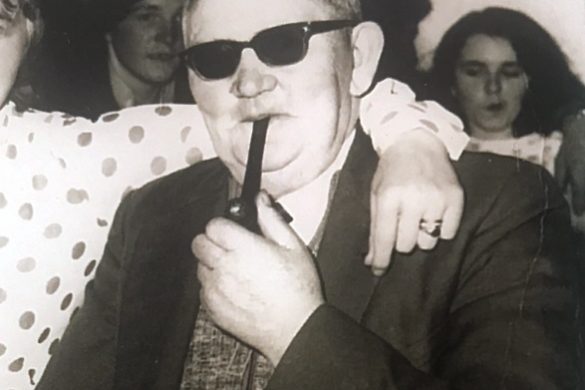 The Fiat Ducato Van – The perfect business partner
Three times this week I was chiselled about Canon cameras from two different types of photographers. The ones like myself who try to make a living from photography and also from people who enjoy photography as a hobby. All of those who ask about Canon were Nikon owners. I seen the time the brand of camera that I shot with would have also have been very important to me as well, now all that bothers me about my camera is that batteries that power the motor drive and provide electric for the flash hold their charge and the camera card has enough room to capture the job that I am doing!

Vans, in my opinion, are a bit like what cameras are to photographers! Which is the best one to have? And which offers the best value?

When Ireland was booming and the breakfast bap was the Top of the Pops, certain brands of vans fitted the must-have slot.

They say the good times are back but I don’t think they have got as far as Donegal yet!

Anyone who is in business will well know what it is like in January even in a good year! Never mind these trying times. And it could be as easy to close the door for good as it is to stay in business.

So as February flows in we tend to think we have survived another year so we look positively at what we have got and decide to give it another go. Well this was the vibe that I got recently when I test drove the Fiat Ducato high roof long wheelbase from Donaghey’s in Letterkenny. 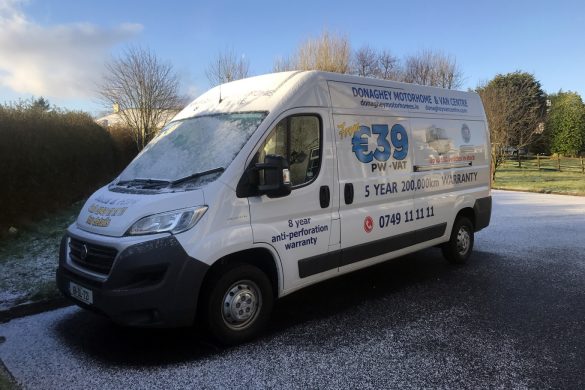 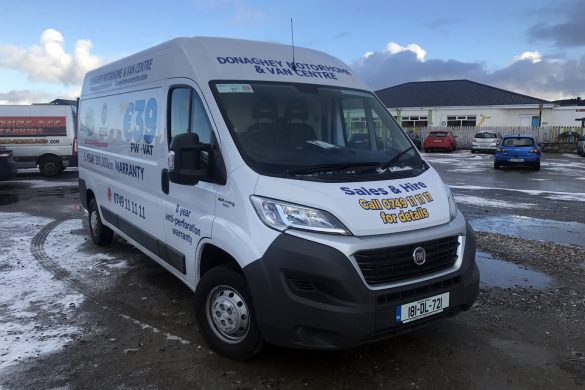 Made to measure
The Fiat Ducato that we drove was the 2.3 130 BHP long wheel based high roof version. For the couple of days I had the van out I had more requests than enough to check out the space these vans had to offer. Tradesmen and delivery people weren’t happy to just look in to check the space in the back they had to get in and walk around them!

This Ducato seemed to fit every measurement that they were subjected to from stepping into the van which you would do a million times if you were in the delivery business. 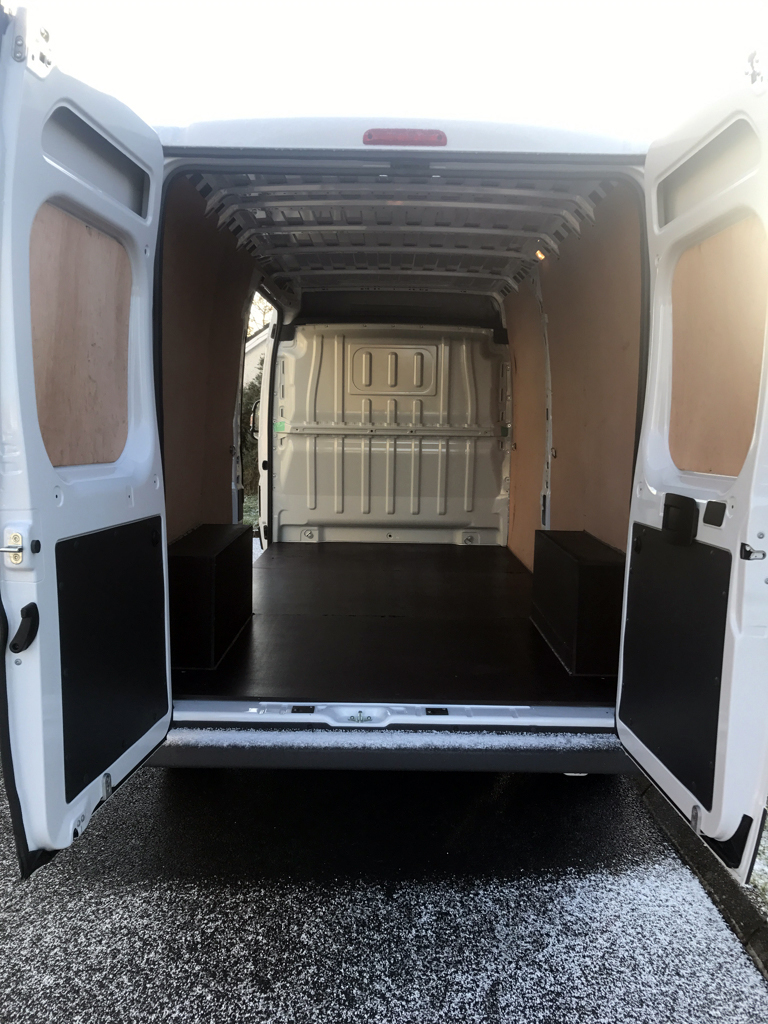 A view of the spacious load space in the new Fiat Ducato high-roof long wheel base. Photo Brian McDaid

The other big plus was the headroom enable anyone no matter what their height is to stand up straight something that is not always possible for other high roof vans in this sector.

The Fiat Ducato comes in a range of van sizes ranging from 4 different wheelbases, 5 different lengths and 3 different heights and is also available in truck form with single cab to twin cab and the van also comes in a crew cab version

Counting the pennies
There was a time when some commercial vans were sore on fuel and that was acceptable but in the times we live in now fuel consumption has to be considered very carefully for the survival of any business big or small. The Fiat Ducato we drove this week ticked all the right boxes on both the running coast and the purchase price of the van of this size.

Our van was doing over 40mpg running about unloaded which would add up to a big difference at the end of a week or month if you needed to cover big miles. The prices of these vans is very competitive too starting around €18,000 plus VAT for the basic version. Add to this 200,000 KMs / 5 years warranty and 8 years anti-corrosion warranty and that’s worry free motoring.

Easy to Drive
For a van this size you would imagine it would feel like a lorry to drive but its very civilised behind the wheel with the exception of the great big mirrors which are great to see everything from the bottom of the back wheel to the top of the high roof. Driving this van you would easily be mistaken it for driving a car, the controls and the quietness inside the cab are so comfortable.

In summing up The Fiat Ducato as in all of the vans in the Fiat Range, the secret to success in these hard times in business is that they keeps their head below the parapet and simply get on with the job in hand and are making an excellent job in doing just that.