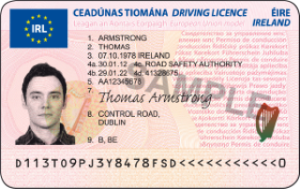 A TD says that Irish people returning home after spending years abroad are being penalised by the current driving licence system.

Sligo-Leitrim TD Eamon Scanlon says he’s been contacted by people, who have been living in the US and who have a US drivers licence, but have been denied an Irish licence. They’re being forced to apply for a drivers permit and undergo the full driving test process again.

He raised the issue with the Minister for Foreign Affairs in the Dáil yesterday.

Deputy Scanlon explained: “Despite the Programme for Government promising to facilitate the return of 70,000 emigrants to Ireland, there are certain aspects of reintegration that are proving to be unnecessarily difficult.

“People coming home from the US are being disproportionately affected when it comes to securing a driving licence. When they return home, their US driving licence is only valid for one year. Once that expires, they are expected to apply for a learner permit, undergo 12 lessons, and only drive when accompanied by a driver with a full licence.

“This is placing a substantial cost and inconvenience on people who have already passed a driving test. That’s not to mention to cost of motor insurance for learner drivers.

“There is a serious inconsistency in this system. Why are drivers with a full US licence forced to go through the full application process when people returning from countries like Taiwan and South Korea can exchange their licences for an Irish one?

“It makes no sense.

“Minister Coveney confirmed that an Indecon report on the potential barriers for people returning home in terms of driver licences, insurance costs, life insurance, health insurance and a range of other issues. I am urging him to ensure that this report is published at the earliest opportunity and the recommendations in it are implemented.

“People wishing to return home from abroad should not be penalised by excessive red tape and nonsensical processes which makes life more difficult for them.

“The government needs to act on this report without delay”.