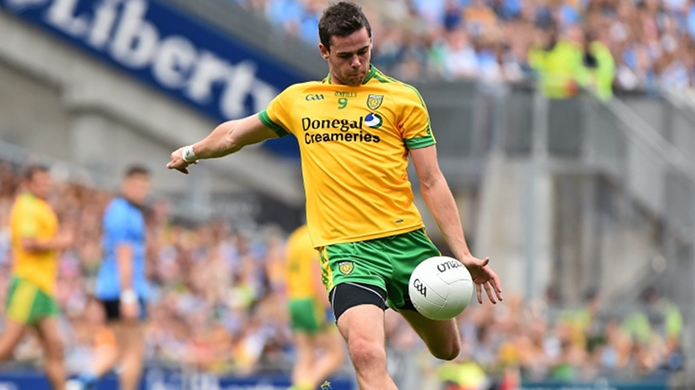 DECLAN BONNER ADMITTED that he occasionally has to give Odhrán MacNiallais a mouthful from the sidelines but refuses to question to Gaoth Dobhair player’s abilities.

MacNiallais was part of the Donegal side who reached the 2014 All-Ireland final but opted off the panel last year under Rory Gallagher. Bonner has since talked MacNiallais back into the panel and was rewarded tonight with a man of the match performance.

Donegal, with a fresh-faced side, overcame a Tyrone team who had won the last six Dr McKenna Cups in tonight’s rearranged final at the Athletic Grounds in Armagh.

With Donegal playing expansively under Na Rossa clubman Bonner, MacNiallais plays the quarter-back role excellently with a wide ranging portfolio of kick passing, which was ket to tonight’s 1-16 to 1-12 success in tonight’s final of the Ulster curtain-raiser.

“He’s really put in a big shift since I came along and you can’t fault him at training. Some of the stuff he does is absolutely top class and he is really enjoying his football.

“That’s the type of player he is. Sometimes you’re shouting at him to show a little more urgency but he’s got brilliant vision and he’s such a talented player. He’s starting to work hard.”