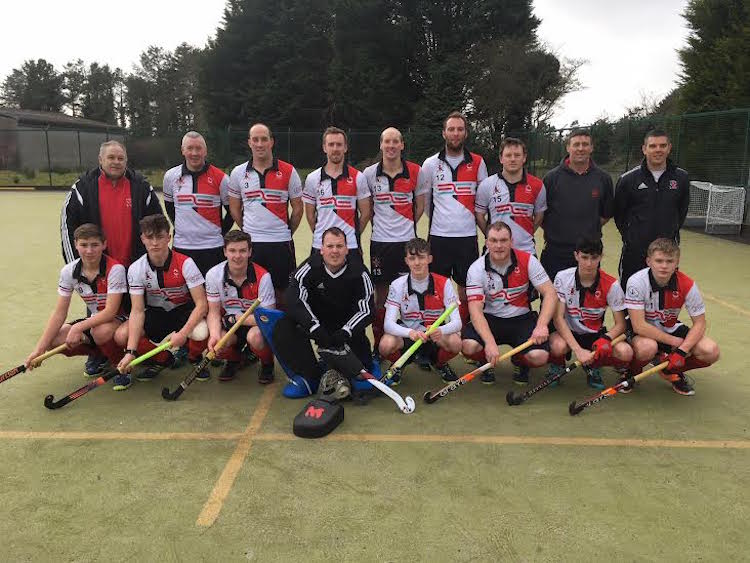 Raphoe came from behind against Newry to advance to the semi-finals of the Irish Hockey Trophy.

Goals by James Wilson, Tommy Orr and William Kilpatrick shot the Donegal side into the last four.

The two teams started well with Newry just edging the game with a few one on one chances. Raphoe remained on level terms thanks to some fine keeping from Davy Moore.

The first half was a tight contest with both teams not showing there cards to early as they both looked towards a semi final in this competition.

Raphoe had one chance in the first half with Stephen Cleverly flick at goal that fell to Tommy Orr who’s shot just wide of the target. The half ended 0-0.

Newry started the second half quicker than Raphoe as the won a short corner within the first 10 seconds, due to some sloppy pacing in midfield from Raphoe.

The Raphoe defence stayed strong. Raphoe went behind after the defence failed to cut out a shelled ball in from the Newry left hand side and Davy England slipped in behind Keith Meehan to tap in past Davy Moore.

Raphoe kept calm and kept playing some good hockey and it payed off when from a side line ball from Simon Goudie found it’s way to the back post to James Wilson who smashed the ball into the back of the net from two yards out.

Raphoe kept up the pressure and worked it a similar goal when John Watt found Stephen cleverly on the top of the D. Cleverly made a nice first time touch onto Keith Meehan who challenged with the keeper.

Meehan bravery paid off as the ball fell to Tommy Orr to simply tap into an open net. Newry really started to pile on the pressure, pushing more men into attack and, only for a few goal line clearance from the defiant defence of Raphoe, Newry would of been right back in the game.

With Newry pushing more men forward Raphoe had three clear cut chances to put the game to bed, with Ian McGonigle producing a miss of the season with the goal at his mercy.

Thankfully Willie Kilpatrick stepped up and finished off the game with a fine finish from the right hand side of the D from another counter attack.

Raphoe wait now for results in other matches to see who they face in the semi final.

Raphoe return to league action, having to make another midweek trip, this time to Queens University on Tuesday night, push back is at 8.15pm.