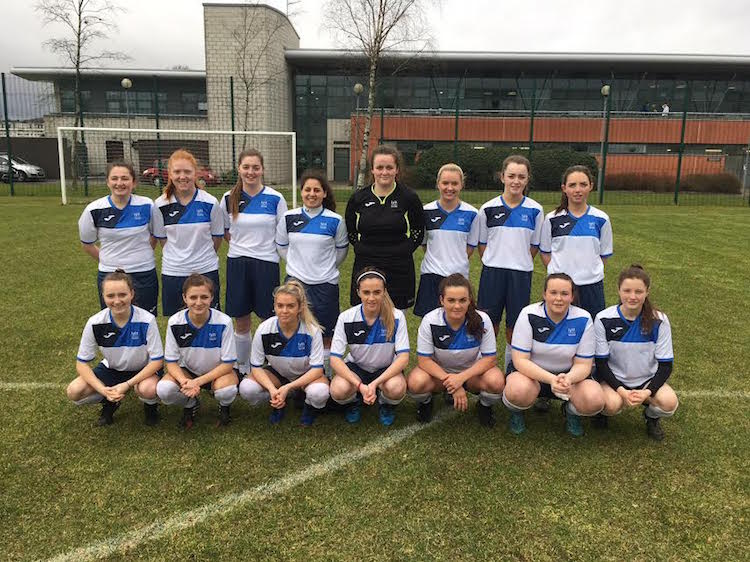 Three and easy as LYIT women advance to League final

Letterkenny Institute of Technology sealed a place in the Rustlers CUFL Women’s Division One final after wriggling away from GMIT this afternoon.

Jonny Baird’s LyIT took a long time to put GMIT to bed, in spite of dominating proceedings, and it wasn’t until Amy Boyd tucked away a 72nd minute penalty that they could relax.

They led through Nicole Gordon’s tenth minute opener and there was time, with eight minutes remaining, for Lauren Cregan to add a third.

For long spells, LyIT made life hard for themselves by not putting their opponents – who hardly threatened Aoife McColgan’s goal over the 90 minutes – away, but they were comfortable winners by the time Vincent McLoughlin shrilled the final whistle.

LyIT began brightly and could have been ahead after just three minutes. Amanda Callaghan saw her cross spilled by Sorcha Murphy, but Cregan’s follow-up was blocked on the goal line.

LyIT took the lead when a teasing free by Zoe Green was flicked into Gordon’s path and the powerful midfielder slotted home.

Gordon’s influence was all over proceedings. The Derry City midfielder left a mark with some meaty challenges, but in general play it was Gordon who pulled the LyIT strings.

A superb pass out Callaghan away on the half-hour, but she fired over the top.

Zoe McGlynn riffled into the arms of Murphy while Cregan’s drive was well turned around the post as LyIT went in search of a second.

It finally arrived when Green had her heels clipped and Boyd stepped up to fire home from the spot.

And the hosts made sure of the win when McGlynn brilliantly sent Cregan clear and her finish was magnificent to the far corner.