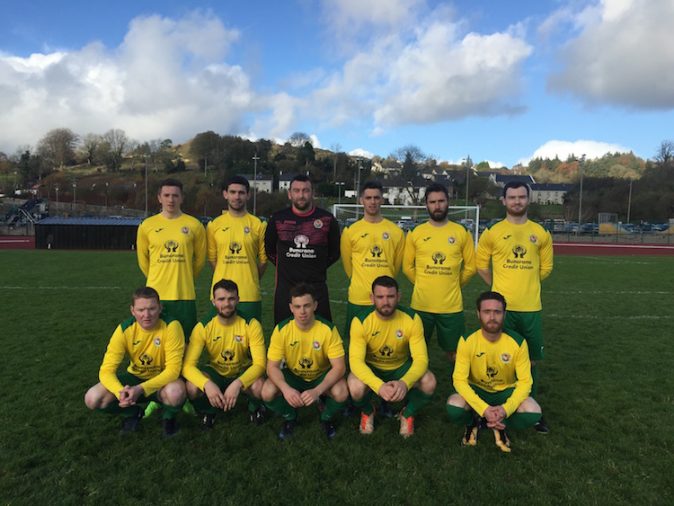 Cockhill Celtic joined Fanad United at the summit of the Four Lanterns Ulster Senior League with a win over basement side boys Swilly Rovers on Sunday.

Cockhill dominated the opening exchanges forcing a series of corners as Swilly stood firm. On 13 minutess, Cockhill opened the scoring from one of these corners when the ball broke to Malachy McDermott and his shot found the net past Ben Boyle with the aid of a deflection.

Cockhill continued to press but were reduced to long range efforts.

Two of these in quick succession from Laurence Toland, one hitting the bar and one forcing a good save from Boyle. Ryan Varma was next to try his luck, his effort rebounding off the post.

The home side doubled their lead on 38 minutes when a chipped through ball from Mark Moran found Toland, whose first touch both controlled the ball and took it around the advancing Boyle before slotting home.

Swilly started the second half positively with Finnian O’Donnell and Matthew McLaughlin causing Cockhill problems albeit with a limited supply line.

On 50 minutes, McLaughlin had a half chance on the volley from a great Shaun Crossan cross but failed to connect.

The home side took full advantage and made the game safe on 58 minutes. A short corner routine made space for Gerry Gill and his scuffed effort found Moran in the box and he fired home.

Swilly came close on a couple of occasions, an audacious effort from Adam Salhi clipping the Cockhill bar while McLaughlin shot straight at Lee McCarron when well placed.

Cockhill pressed for more goals in the remaining time but found stubborn resistance Boyle and Conor Duggan, the closest they came to adding a fourth a Darragh McDermott effort hitting the upright.