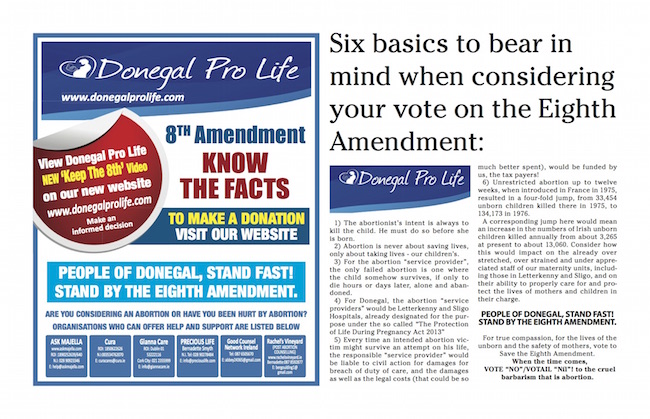 The Donegal Prolife Group has asked the public to bear in mind what they have termed six basics when considering your vote on the Eighth.
  
These are:
  
1) The abortionist’s intent is always to kill the child. He must do so before she is born.

2) Abortion is never about saving lives, only about taking lives – our children’s.

3) For the abortion “service provider”, the only failed abortion is one where the child somehow survives, if only to die hours or days later, alone and abandoned.

4) For Donegal, the abortion “service providers” would be Letterkenny and Sligo Hospitals, already designated for the purpose under the so-called “The Protection of Life During Pregnancy Act 2013”

5) Every time an intended abortion vic- tim might survive an attempt on his life, the responsible “service provider” would be liable to civil action for damages for breach of duty of care, and the damages as well as the legal costs (that could be so
much better spent), would be funded by us, the taxpayers!

The group says the corresponding jump here would mean an increase in the numbers of Irish unborn children killed annually from about 3,265 at present to about 13,060.

“Consider how this would impact on the already over-stretched, over-strained and under-appreciated staff of our maternity units, including those in Letterkenny and Sligo, and on their ability to properly care for and protect the lives of mothers and children in their charge,” said a spokesperson for the group.