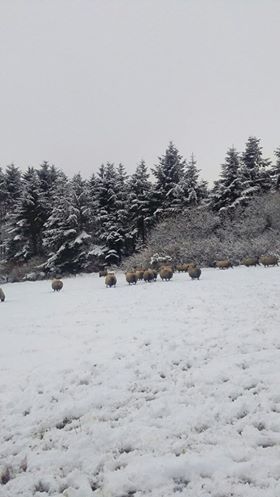 Forecaster: Jaw-dropping amount of snow could be on way

EUROPEAN weather models are showing a potentially ‘jaw-dropping’ amount of snow headed for Ireland next week, a forecaster said today.

He says the temperatures being currently forecast are “Baltic” dropping to -7C.

“Details are of course sketchy but the depth of cold air apparently heading west towards Ireland would suggest that temperatures could be well below freezing, and that snowfall is a strong possibility in the east, south and perhaps coastal areas of north and west as well, and we are seeing some charts on the most reliable models that are real jaw-droppers for snowfall potential, so be aware and check for updates,” he said.

Mr O’Donnell said there is still a slight chance of a less intense outcome “but with all global models marching in lock-step towards this scenario, confidence is growing”.

The forecaster said this is what could be expected is roughly as follows:
TODAY will be sunny with cloudy intervals, isolated sprinkles of rain possible near north facing coasts, and highs 7 to 9 C.
TONIGHT will have clear skies to start, with some increase in cloud, mist and fog later on. Lows of -2 to +2 C will occur rather early before sunrise, and some roads may be rather slippery in the morning commute.
WEDNESDAY to FRIDAY will see more cloud than clear skies, generally, with spotty outbreaks of drizzle or light rain, in light southeast winds that will gradually become moderate by Friday. Highs each day 6 to 8 C and lows generally 1 to 4 C but could drop below freezing where skies clear briefly.
SATURDAY could see a gradual drop in temperature if the faster guidance is correct, in terms of colder air arriving from the east. But there is probably an equal chance of it staying similar to the days previous, with the temperature drop delayed to Sunday. For now, we’ll say variable cloud and moderate east to southeast winds, possible drizzle or light sleety rain near east coast, highs 4 to 7 C.
SUNDAY is more likely to be turning colder in stages with temperatures falling sharply by afternoon and evening as stronger east winds develop (40 to 60 km/hr) adding quite a chill to temperatures around 2 to 5 C.
MONDAY to WEDNESDAY (26 to 28 Feb) are now looking very likely to be “Baltic” as the expression goes, in fact that’s pretty much where the winds will originate, with some variations in direction between southeast and northeast as weak troughs develop in the arctic easterly flow. Temperatures will probably be well below normal with highs -2 to +2 C and lows -7 to -3 C, higher readings where these winds have just come in from the ocean or Irish Sea, lower readings well inland. Heavy snow showers are quite possible especially near east and south coasts, won’t speculate on amounts yet but disruptive potential.

Forecaster: Jaw-dropping amount of snow could be on way was last modified: February 21st, 2018 by John2