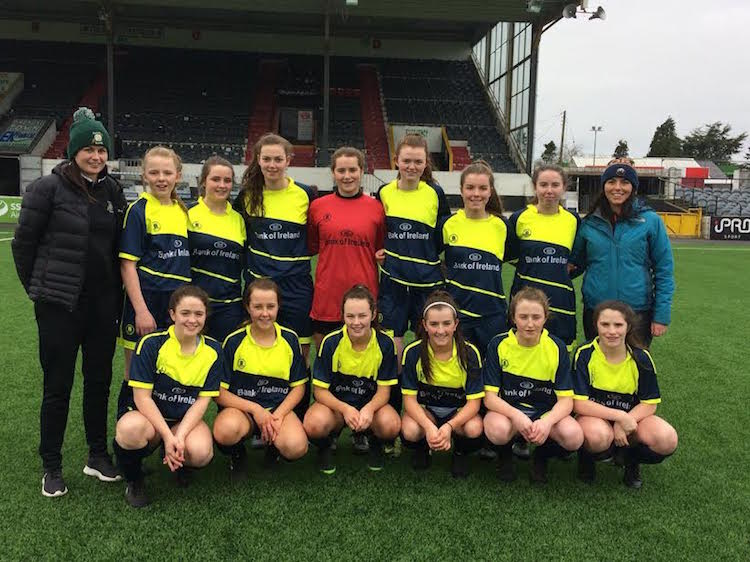 Moville Community College are on the trail of a national Cup title today as they face Presentation Secondary School from Thurles in the Bank of Ireland FAI Schools Senior Girls National Cup final (1pm, Home Farm).

Moville won this title five years ago, when Roma McLaughlin and company took home the silverware.

Moville Community College manager Jenna McDaid has seen her side defeated Carndonagh Community School 7-2 in the Ulster final before narrowly getting away from Coláiste Bríde from Enniscorthy in the semi-final at Oriel Park.

Goals from Bronagh McGuinness, Kerry Brown and Megan Havlin had Moville 3-0 up and cruising before Enniscorthy hit back.

‘We were under pressure and just wishing for the game to close out,” says Moville manager Jenna McDaid.

Brown is an Irish U15 international and will come up against Aoibheann Clancy, an Irish colleague, in this afternoon’s final.

McDaid, who is assisted by Bonagee United’s Natalie McFadden, says she has a big task ahead of her in Dublin.

McDaid says: “We’re confident. The hardest thing about the team is picking it. We’ve had subs who are every bit as good as players starting so it’s a tough one. It’s a good problem, but not a problem I’m used to. It’s great. It’s a strong panel we have.”

Some of the contemporaries have tasted the bitter pill of an Irish final defeat from U15 level.

McDaid and company don’t want to come back down the M1 empty handed.

She says: “There’s a big hype about the school. Everyone is asking about it. The girls are really excited about it.

“To win an All-Ireland final is something you dream about. You can’t get any better than that at this level. I know the girls are really determined.

“They’ve watched other ones come through and won a final. Some of them were on the U15 team that lost the final and they’re really hungry for it. They don’t just want to get to a final – they want to it.”