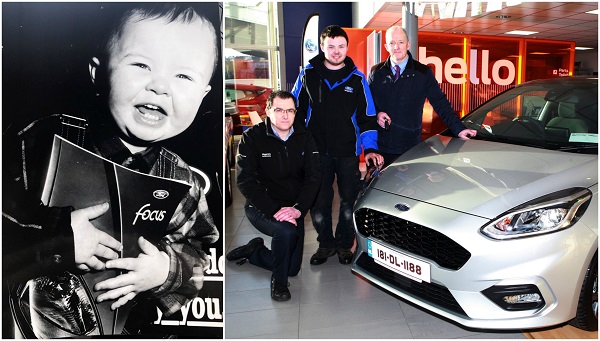 DD Motoring: New wheels for the next generation

Many’s the child that has dreams of what they want and what they will do when they grow up, and as this old black and white photos shows taken nearly twenty years ago – dreams can happen if you put in the effort!

Eoin Kelly pictured nearly twenty years ago in Hegarty’s Old Ford Garage in Ballymacool as a child with a copy of a brochure of the new Ford Focus which was launch on to the Irish market. 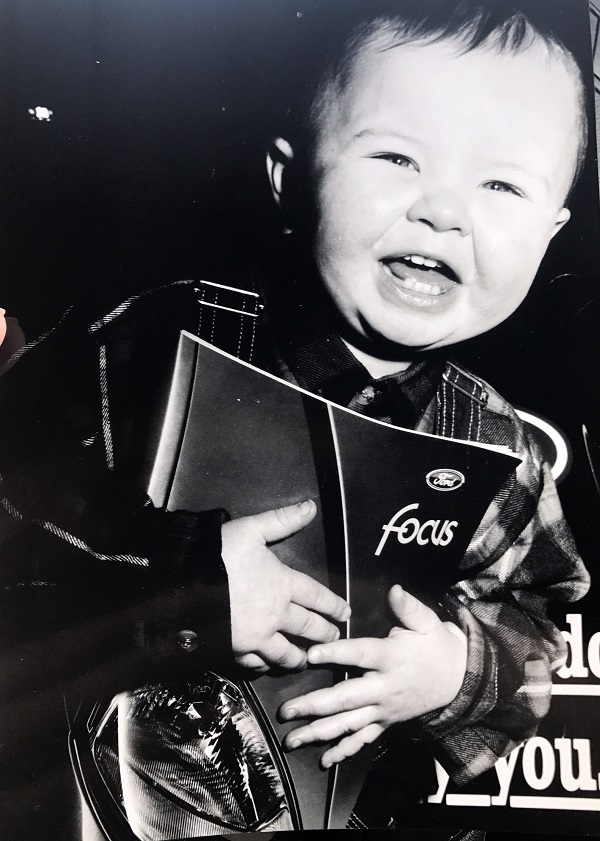 Eoin Kelly in 1999 in Hegarty’s Autos Service in Letterkenny at the launch of the Ford Focus. Photo Brian McDaid

And the same young Eoin pictured this week as he gets ready to get behind the wheel of his first new Ford. 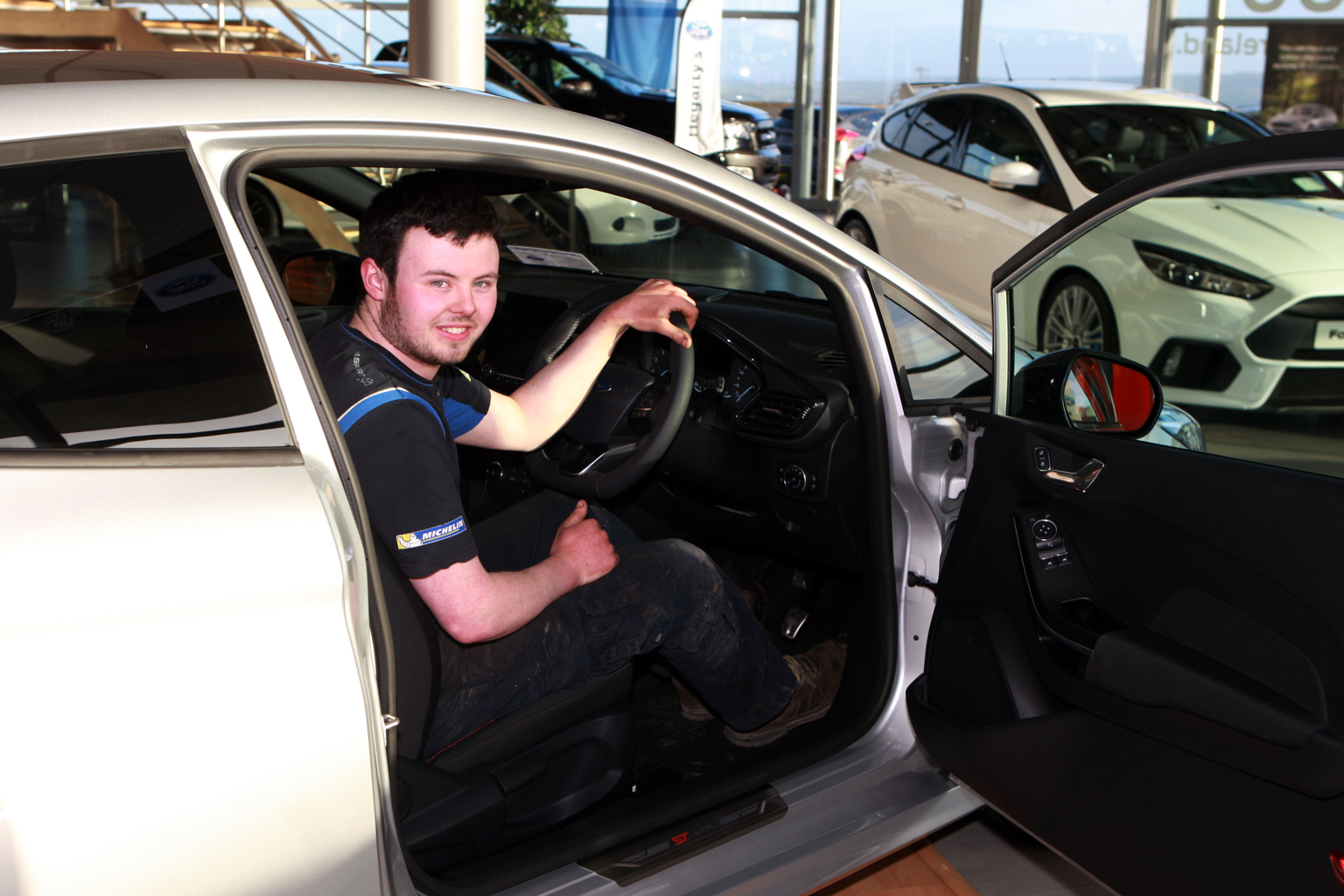 Eoin is a grandchild of the late Andy Hegarty who started his own business in the 1960s in Ballymacool. Before that Andy Hegarty started off in the motor business as a store man in McClean and McLaughlin’s garage in Letterkenny where Benny Sweeney’s is located now.

In Andy’s day Mc Clean and Mc Laughlin’s were Volkswagen Dealers before they became Ford dealers and like Eoin, Andy also bought himself a new car which was a VW Beetle from the garage that he worked in. 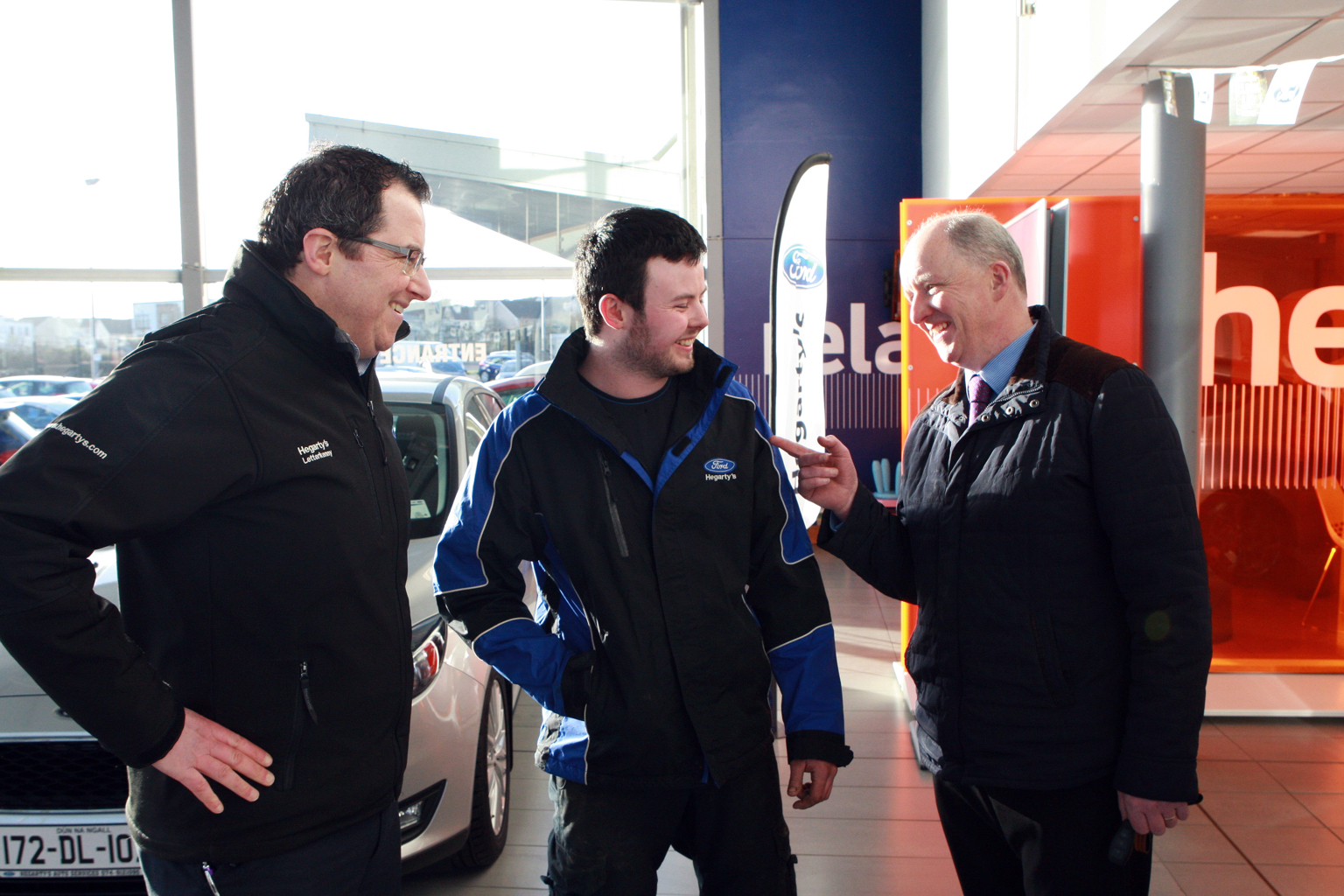 Words of advice from his two uncles, Owen Kelly get ready to go on the road with his first new car. He is pictured with with his uncles Paul and Andrew Hegarty from the Ford Garage in Letterkenny. Photo Brian McDaid

Eoin is serving his apprenticeship as a mechanic with Ford at Hegarty’s in Letterkenny. His first car was a secondhand Ford Mondeo Diesel and now the young motor mechanic is moving to petrol with the purchase of this two-door fiesta one litre Eco boost.

He is pictured with his two uncles Andrew and Paul Hegarty as he gets the keys of his Fiesta and also gets some words of advice for his journey on the road ahead in his new motor. 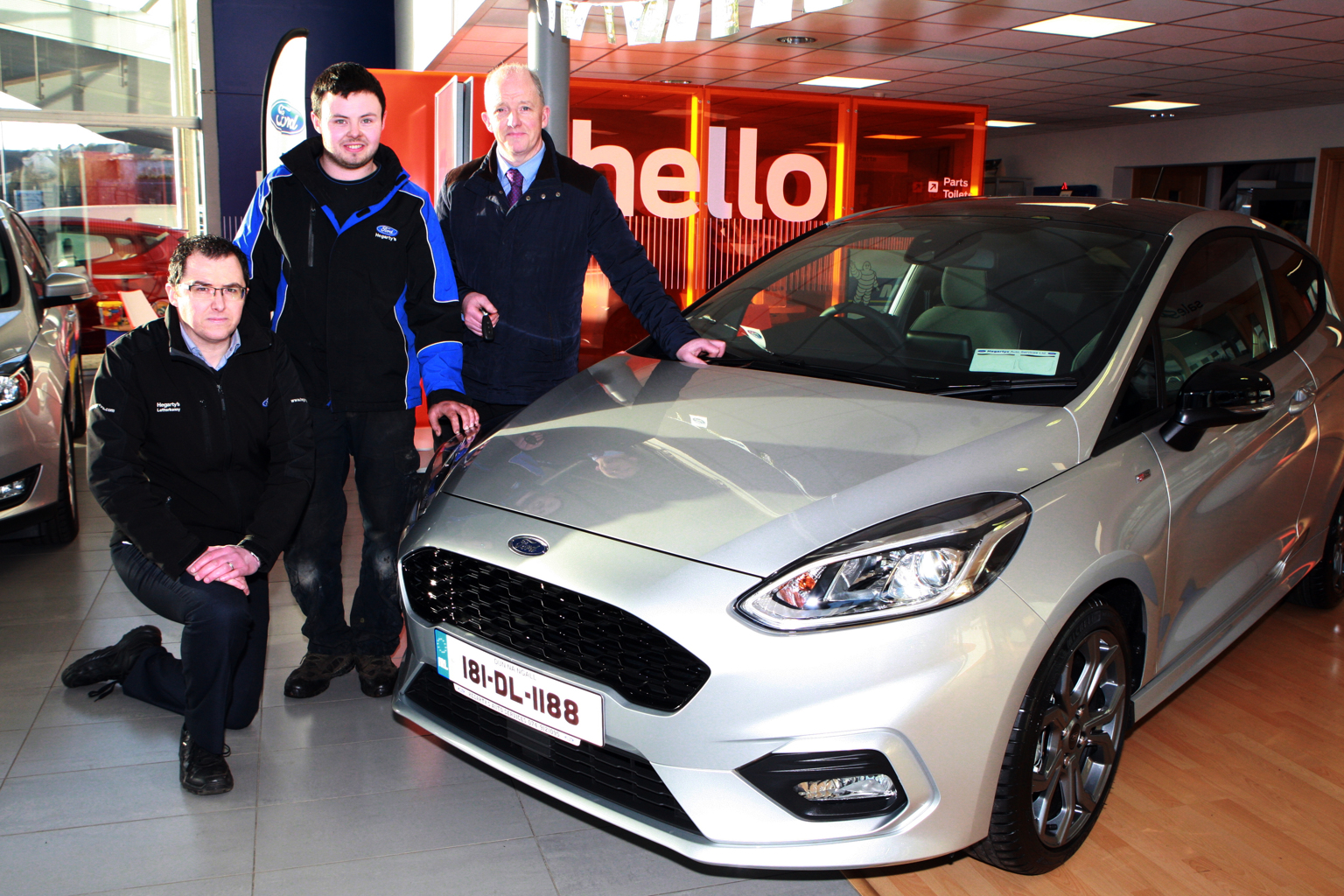 Words of advise from his two uncles Eoin Kelly gets ready to go on the road with his first new car, He is pictured with with his uncles, Paul and Andrew Hegarty from the Ford Garage in Letterkenny. Photo Brian McDaid

Pride and joy 100 years ago
Dr. Henry Maurtin Johnston was considered to have the best car in Donegal a century ago.

He was the local doctor in Stranorlar. His car was his pride and joy and nothing was spared in the upkeep and the maintenance of it. As a local doctor his car may well have been seen out in public a lot but it wasn’t the only car in Co Donegal at the time.

Dr Johnston was the 47th person to register his car and received his number IH 47. 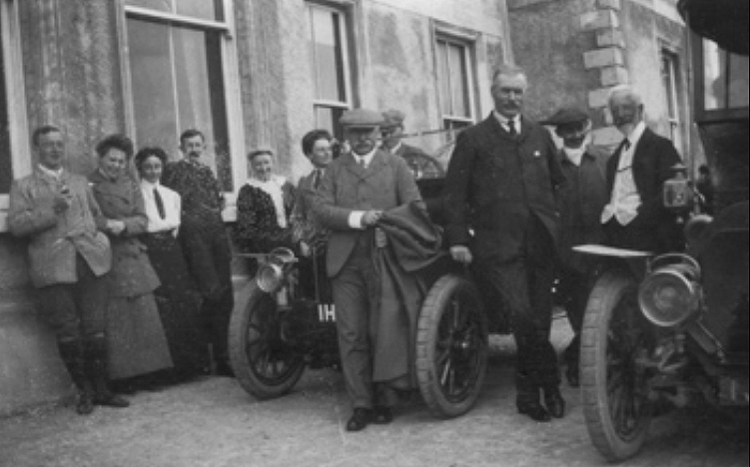 The two letters of the registration of Johnsons’ Motor Car IH on the car on the left and Dr. Johnston pictured on the right with the light coloured waistcoat at a get-together

The car became famous locally when it was ambushed by the IRA in 1920 to transport arms and when down in local history when a local poet from Ballybofey, Willie Gillespie wrote a song about the whole incident.

Then the band the Dubliners made Johnston Motor Car a worldwide name in the 60s when they uncovered the old ballad and recorded it.

In the song it is suggested that Dr. Johnson wasn’t impressed that his car was taken to transport ammunition.

But privately the thing that really annoyed him was that his fine well-tuned car was described as having a din from it. 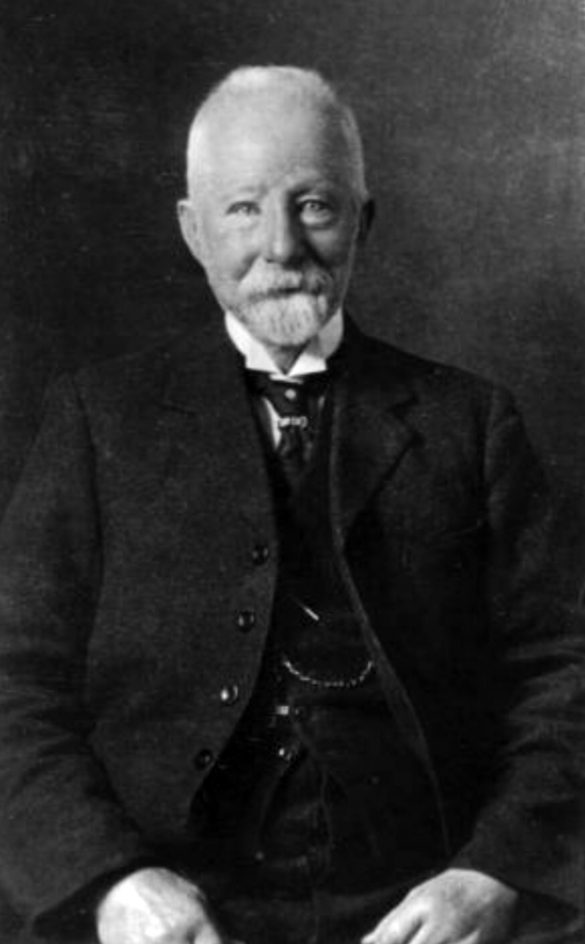 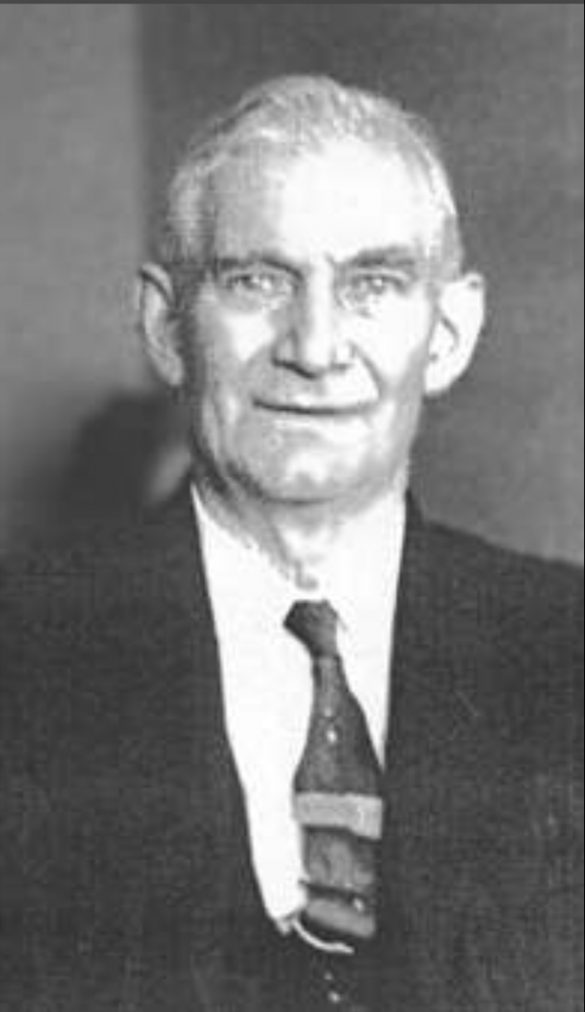 I suppose the din worked well for Willie Gillespie to rhyme with Glenfinn!

Perhaps Dr. Johnson would have been happier if his car was taken through Gweedore and Willie Gillespie could have included you could hear the Rolls Royce Roar going through Gweedore. (I don’t know if it was a Rolls Royce by the way but would love to know what make of car it was.) 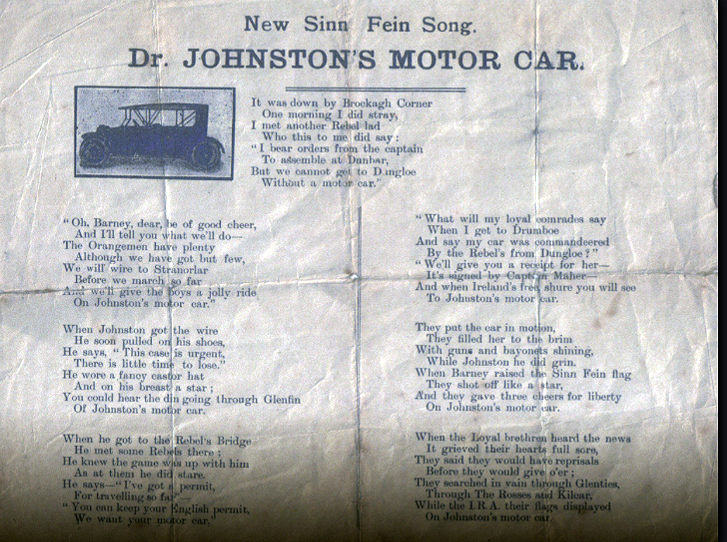 The words of the song by Willie Gillespie that made Johnston’s Motor Car famous.

Not to be out done Charles Earl of Leitrim registered another car getting the number IH 48, so between them they owned six cars which was 25% of the cars owned by people living permanently in Co. Donegal.

Of the first 50 cars registered in Co Donegal half of them were registered to people living in neighbouring counties, with Strabane Co Tyrone the most popular location. The most interesting registration other than that of IH 47 which belonged to Dr. Johnston from Stranorlar – the man who got the very first registration in Co Donegal. 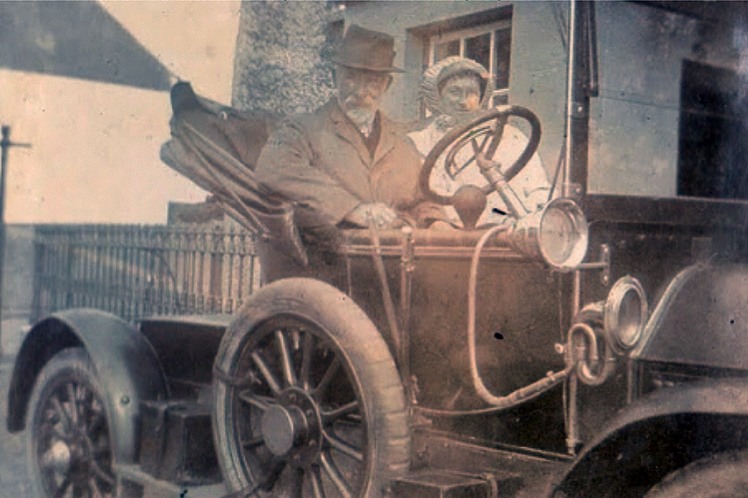 Dr Johnston at the wheel of his fine car which was the 47 car to be registered in Co. Donegal.

Number 1
The first ever car registered in Co. Donegal went to a man with an address in Treankeel Lodge, Letterkenny. The only place Treankeel comes up on the present day map of Donegal points towards the Brennagh area of Glenswilly.

His name was “Sydney Richardson Christie Miller” which would certainly silence the odd nick name up the Glen if that was where he actually did live permanently!

With the help of the Co. Museum this week and curator Judith Mc Carthy we managed to trace a man with the exact same long-winded treble barrel name who was recorded on the census for the Essex area in England at that time. If this was the same man who registered the first car in Donegal, he more than likely was over in Donegal on a long holiday or staying with friends indefinitely.

Sydney Richardson Christie Miller was a man of means and his claim to fame was that he was the owner of a rare collection of priceless books, poems and aires which were collected by his uncle who was a member of parliament. His family made their fortune as hat makers called “Christy’s London” going as far back as 1773 and still in business today. When Sydney passed away in 1931 there was over £300,000 in his will.

One thing looks certain from the record of cars registered in Co. Donegal starting in 1903 over one hundred years ago was that Donegal was the location for the well-to-do to come and stay in as guests in the many big houses or to own a second residence judging by the variety of addresses.

The sad part on the flip side of this coin for the majority of Donegal at this time there were only starting to recover from the devastation that the famine subjected them to.

The Irish population lost one million people through starvation and related diseases and lost another million of if population to emigration in great famine of 1845-49.