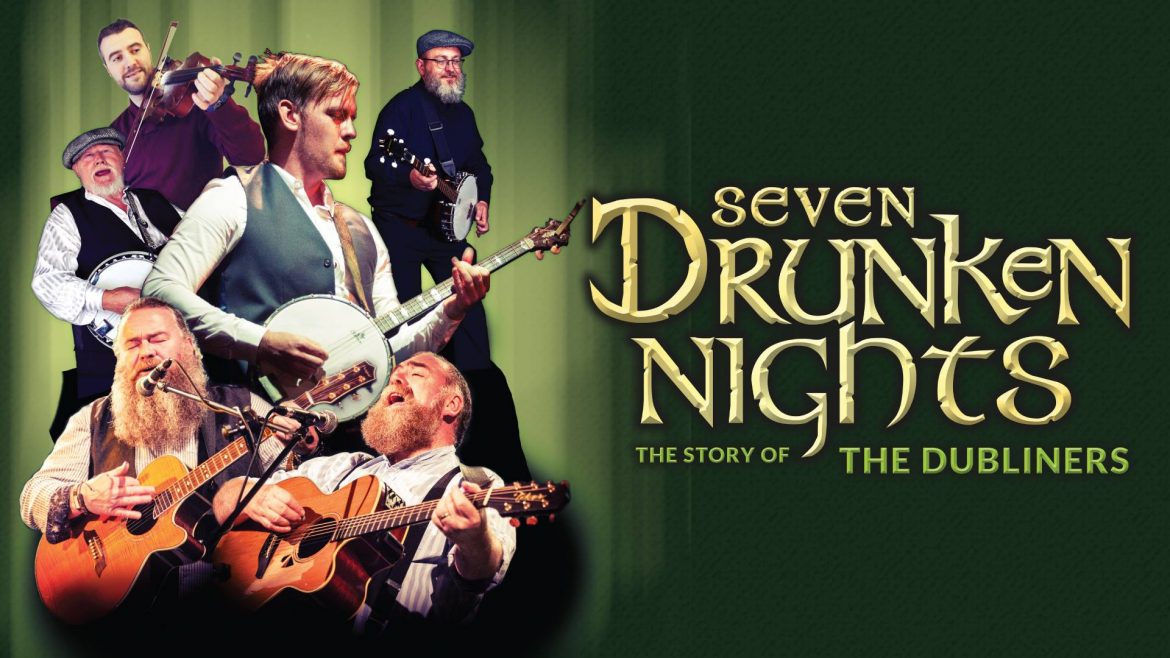 Fans of The Dubliners will be delighted to hear that the hit theatre tour Seven Drunken Nights – The Story of the Dubliners is coming to Donegal this March.

Direct from London’s West End, the show is the musical journey of the story of Ireland’s Folk Legends. Joe Gallagher Entertainments have teamed up with Prestige Productions to bring the show on its first Irish tour, starting in Letterkenny on 1st March 2018. Tickets are €26.50, on sale now from the Clanree Hotel and www.ticketmaster.ie 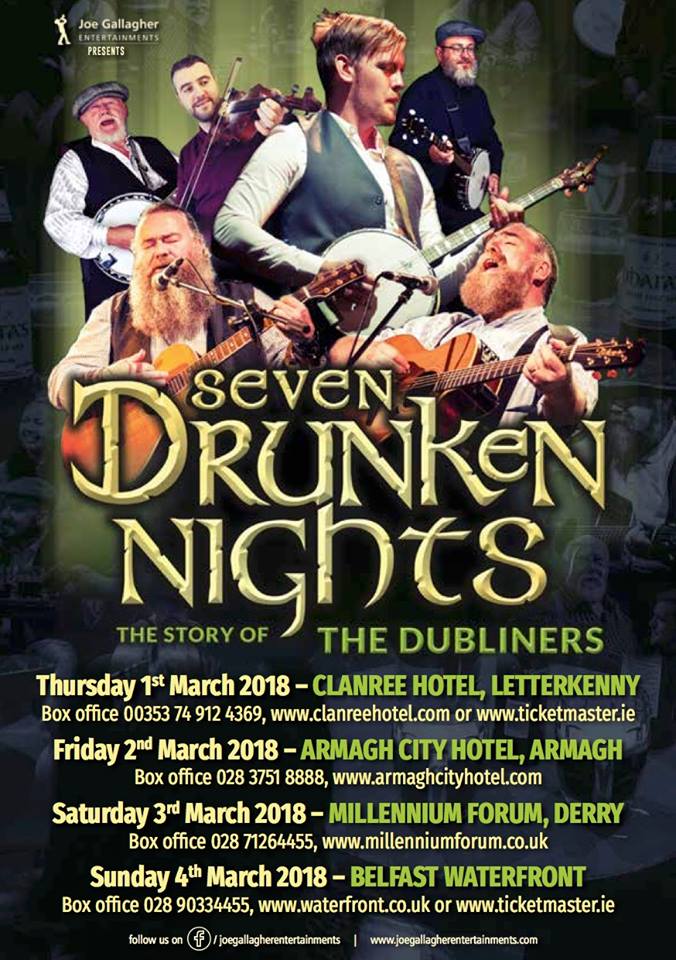 In 1967, The Dubliners released a song so controversial that it was officially banned on the radio in Ireland. This infamy catapulted them into global success, and turned the Irish folk band into legends.

Fifty years later, a one of a kind theatre show named after the famous song performed a sell-out tour, bringing to life the incredible story of this phenomenal Irish band. The show was met with critical acclaim and performed in London’s West End. In 2018, Seven Drunken Nights – The Story of The Dubliners returns to the UK as part of a massive European tour.

Seven Drunken Nights – The Story of The Dubliners, takes you on a musical journey through the career of Ireland’s favourite sons, Ronnie Drew, Luke Kelly, Barney McKenna, Ciaran Bourke and John Sheahan as they rose to fame as Ireland’s legendary folk band.

From their roots in O’Donoghue’s Pub in Dublin, Seven Drunken Nights features all the highlights of an amazing fifty-year career and captures the spirit of the Irish folk band that took the world by storm. For fans of The Dubliners, this truly is a show that cannot be missed.

The opening night of the show in Letterkenny’s Clanree hotel will see local boy Conor Elliot take to the stage as a key member of the show. Born and bred in Donegal, Conor is an established multi-instrumentalist with fiddle being his first instrument and his musical passion.

Music has been a major influence in his upbringing (born in a rural pub in Donegal) Conor was exposed to traditional and country music at an early age and formed his first band ‘Rockall’ at 16 performing throughout Ireland. It was during this time that Conor earned the name ‘The Donegal Fiddler’.

Conor has toured extensively throughout Ireland, England and most recently held a residency in Salou, Spain.

Creator and co-producer Ged Graham says: “Both myself and fellow cast member Billy Barton were born and raised in The Liberties in Dublin and grew up listening to The Dubliners. I don’t think that there is any musician in Ireland who hasn’t been influenced by their music. The Dubliners hold a unique place in the hearts of not only Irish people but people who love folk music generally and epitomise the image of an Irish Ballad Group.”

“There is still a love and respect for the music. When ‘The Dubliners’ name was retired in 2012, it sowed the seed for creating a show that would tell the story of The Dubliners and keep their music alive.”

“Seven Drunken Nights is very much an audience participation show. People can expect to hear all of the classic songs of The Dubliners and to feel the energy of the lads at the peak of their performing careers. It will be a guaranteed great night of music, song and craic!”

With Irish craic, music and humour throughout, Seven Drunken Nights matches the energy seen only by The Dubliners at the height of their career.

Featuring some of Ireland’s most talented musicians, singers and storytellers, you will be singing, clapping and dancing in the aisles from opening number, right through to the last rousing chorus.