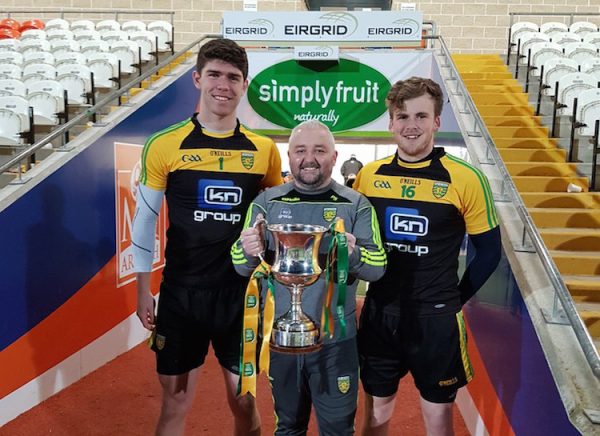 McKaigue will play for Slaughtneil in this weekend’s All-Ireland semi-final against Nemo Rangers, but was gripped by a letter from Dr McManus.

In October, popular Pat Shovelin passed away after a nine-month battle with cancer.

Dr McManus had helped to treat his former Donegal backroom team colleague in his final weeks.

“On Oct 21st, a great man passed way, after what can only be described as a Herculean effort to remain with his wife and two boys,” his letter to McKaigue read.

“Three weeks or so before his passing, Pat got the news that there was nothing that could be offered in terms of treatment. As we sat in his kitchen, I borrowed a line from the Shawshank Redemption and told him he had to get busy living!”

Pat and Dr McManus decided to arrange a charity match between Donegal’s 2012 All-Ireland winning side and a team of players from outside of Donegal.

“I write to inform you, that you made the team,” Dr McManus wrote..

Every so often in life you get hit with a sense of perspective! I received this letter today and I think it sums up how unique the GAA and its members are. #GAA pic.twitter.com/WVWDlwFYbT

“However, I can assure you that such was the esteem, respect and absolute love the people of Donegal had for Pat Shovelin, that your place on the team, for me and many more, is amongst the highest of accolades

“Perhaps, at some time of your life, on or off the field, when things are not going to plan and you need a pick up, that you can draw inspiration and confidence from his letter and realise that a great man, a man you never met, thought you were the best in your position to face his beloved Donegal.”