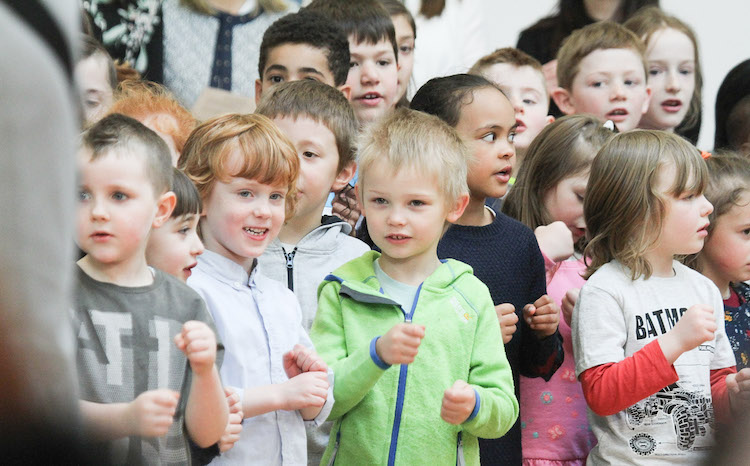 ‘Build a better future’ was the recurring theme as Letterkenny Educate Together National School’s impressive new school was officially opened this afternoon.

The Minister for Education and Skills, Richard Bruton TD, performed the official opening of the new 24-classroom school on a joyous occasion for pupils, staff and committee members.

As special guests made their way into the hall, pupils sang one of the school’s songs, titled ‘Build A Better Future’.

It was a line that was central to the day.

“This was the vision that led a determined group of people to campaign for an Educate Together school in Letterkenny back in 2005,” LETNS Principal, Aine Fabisiak, said.

Members of the initial steering group were present today.

Previously based in prefabricated buildings at Ballyraine, teachers and students made the move to their new state-of-the-art 24-classroom development near the former Unifi site in Kiltoy at the end of October 2017.

Ms Fabisiak said: “There have been many changes over the years, but our child-centred approach to education has not changed. We are delighted to be in a position to open our doors to more members of the community.

“We are so, so pleased to finally have the building. We have built strong partnerships and we work for our pupils.”

She thanked the staff for their ‘endless energy, enthusiasm and unwavering commitment to the school community’.

Minister Bruton unveiled a special plaque to commemorate the opening.

“It’s a great day…If we can see far, it is because we stood on the shoulders of giants,” Minister Bruton said.

“There is so much variety here. Everyone has a different story. Every one of those stories are equally important and we show respect for everyone around us. That is embedded in the model around us and that is something to really value.

“There is so much talent around us. We need to tap into that talent.”

Paul Rowe, the CEO of Educate Together, said it was a ‘fantastic and wonderful day’.

Mr Rowe said: “This is a true celebration of community spirit and of the true quality of people who have come together for something special. This is something really worth celebrating.

“Providing this type of education in important regional towns is vital for the future of the country; a future in which we can have a vibrant, rural economy.”