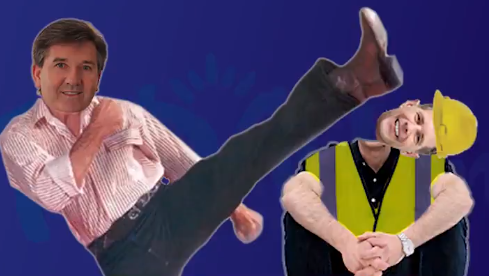 You have to hear this wee song ‘Daniel’ wrote after Room to Improve!

The Room to Improve experience has inspired Daniel O’Donnell to write about his epic quest for new toilets in his Kincasslagh home.

TodayFM yesterday featured an interview with ‘Daniel’ as part of the Gift Grub impersonation series. The Donegal singing legend talked about his rivalry with architect Dermot Bannon before releasing his new ballad to the tune of the Goats Don’t Shave song ‘Hills of Donegal’.

Great lines like ‘I’ll bury ye beneath me wooden tiles’ and ‘I wanted to kick the head off him but I only said Gee-Whiz’ capture the hilarity of their televised spat.

“We’ve had quite enough of each other,” Daniel admitted to radio host Ian Dempsey.  A fake deleted scene hears ‘Daniel’ threatening to throw Dermot off a cliff, shouting: “€395 grand, do you know how many nights I have to do in Killarney for that amount of money?”

You can listen to the full interview here: https://www.todayfm.com/podcasts/83830/Gift-Grub—Daniels-Song-Of-Revenge-For-Dermot-Bannon

This skit with impersonator Mario Rosenstock is another glimpse at how popular Daniel and Majella’s home renovation was on RTE last Sunday. The episode made history as the highest-ever viewed edition of Room to Improve, and was the top programme of the year so far in Irish viewership ratings.

You have to hear this wee song ‘Daniel’ wrote after Room to Improve! was last modified: February 23rd, 2018 by Rachel McLaughlin
Tags:
COMEDYdaniel o'donnellimpersonationMUSICRoom To Improve