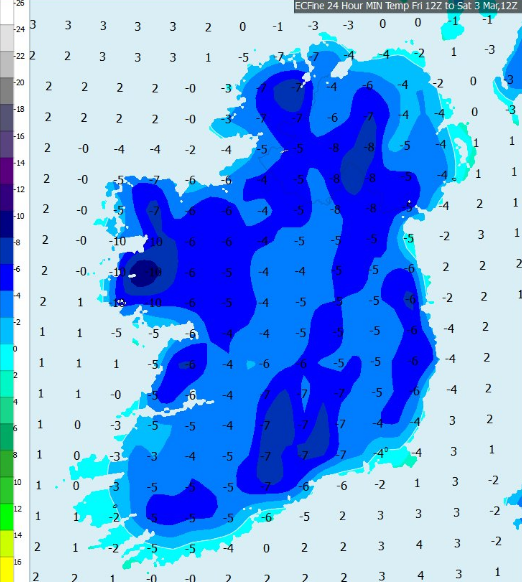 Beast from the East: Ireland braces for the big freeze

Another cold snap is on the cards as forecasters warn that temperatures could dip to -10 in some parts of the country this week.

The Government Task Force on Emergency Planning is to meet tomorrow morning in light of the adverse weather forecast.

“Disruptive accumulations of snow” are expected throughout the week, with the east and southeast to be the worst affected.

The regional forecast suggests that Monday will be largely dry, with the chance of an “isolated snow flurry later in the day.”

The cold weather begins to take hold on Monday night, with temperatures dipping to -3 degrees.

Met Éireann forecaster Joanna Donnelly says that Ireland could possibly see a red level warning “depending on the nature of the showers that come our way.”

“These snow showers, unlike the showers we’ve become accustomed to this winter, won’t wash away because the air is mostly dry… they won’t melt either because temperatures are going to be very, very cold,” she explained on RTÉ.

“These extreme cold conditions are going to stay right through the week because we’ve got a blocking high, a firmly situated anti-cyclone up across Scandinavia and it’s feeding a south-east/easterly airflow up over Ireland.”

“We need to keep an eye on elderly neighbours, relatives and friends to make sure everybody’s stocked up this week,” she added.

Ok so y’all remember when I tweeted that picture of the reddest chart I’d ever seen in work? And everyone lost their minds? Well… #cold #snow #weather Watch out for those in need; #elderly #Homeless #AnimalWelfare pic.twitter.com/uYs6ET15m2

Frequent snow showers are expected across eastern counties during Tuesday evening and overnight, with slight to moderate accumulations expected by dawn. Temperatures on Tuesday night will dip to between -3 and -7.

Met Éireann says that further snowfall will occur into Wednesday morning with frost and ice persisting into the day.

“Further snow showers overnight on Wednesday, mainly across Ulster, Leinster and east Munster but with a few flurries possible elsewhere. Severe frost forming nationwide with temperatures falling to between -3 and -7 degrees in strong easterly winds.”

Thursday will be “bitterly cold” with scattered snow showers.

“A more persistent spell of snow is expected to move up from the south during Thursday night, with significant accumulations in many areas. Fresh to strong easterly winds will lead to drifting in places.”