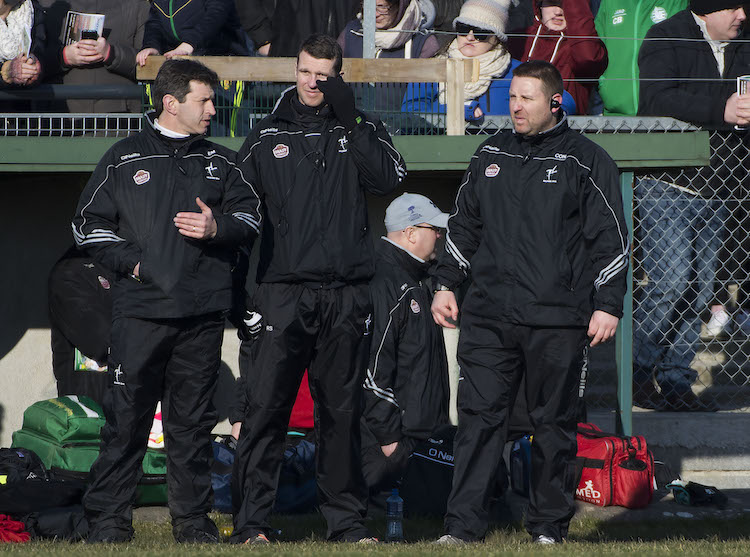 Kildare manager Cian O’Neill took aim at referee David Gough after his side fell to a defeat to Donegal that leaves the Lilywhites on the brink of relegation.

O’Neill was incensed at the 16th minute sending off of his captain Eoin Doyle.

The centre-back was shown a second yellow card for not wearing his gum shield.

Doyle, having been booked for an over-the-top barge on Ryan McHugh, was instructed to leave the field to get a gum shield.

As he headed for the dugout, Doyle caught a kick-out from ‘keeper Mark Donnellan, who had been unaware of what was unfolding.

O’Neill took time out to view the incident on a pitchside monitor before speaking to the media.

“He shouldn’t have re-started the game until the player went off the pitch.

“No-one knew he was being told to go off. He sprinted over to the line and called: ‘I need to get a gum shield’.

“He went for the ball. Even a child at four years of age will know what you do when a ball is kicked to you – your reaction is to go for the ball.

“He caught it while he was still running over to us. The ref’ didn’t realise he had already given him a yellow card.”

O’Neill claimed the player’s original gumshield had been ‘knocked out of his mouth’.

Despite playing 54 minutes with a man extra, Donegal needed a late and fortuitous goal from Ryan McHugh to earn their first League win of 2018.

Goals by Daniel Flynn, Niall Kelly and David Slattery had given Kildare real hope, but they were pipped by that late McHugh goal.

O’Neill said:  “You really couldn’t fault the lads. That’s what we have to hold onto. It would be easy to say the League is over, but we have that and we need to keep learning.

“They got a very soft goal, scored four points off our kick-outs and four off turnovers. We needed to be so economical with 14 men and we weren’t.

“To be fair, when we didn’t have the ball, you have to give them credit for working so hard. We will focus on the positives and learn from the negatives.”