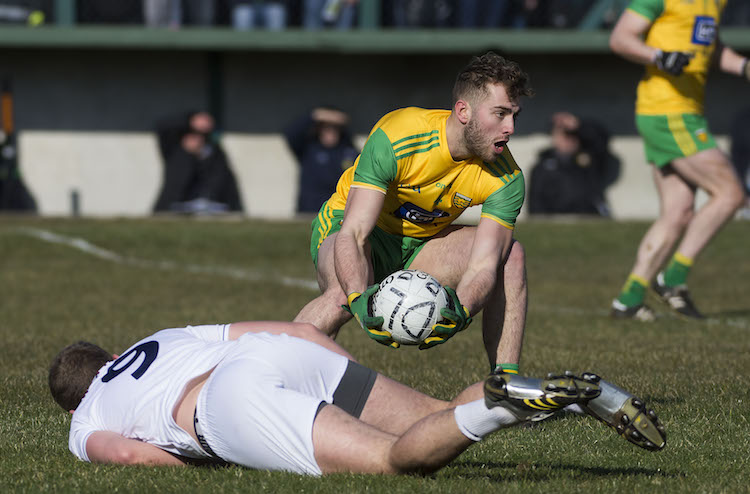 Donegal needed a stroke of good fortune – and got it in the form of Ryan McHugh’s 65th minute goal – for a first League win of the year.

From way out on the left-hand side of Fr Tierney Park, McHugh let fly with an attempt at a point that dropped over the head of Mark Donnellan, the Kildare goalkeeper.

It was just the tonic for Donegal, who were rocked by the concession of three goals and who were opened much too easily by the Lilywhites, who played with 14 men for 53 minutes.

For long spells, it was they who looked like they had the numerical advantage and Daniel Flynn, Niall Kelly and David Slattery’s goals had Donegal on the ropes.

Slattery turned in at the back post ten minutes from the end to draw Kildare level, but Donegal responded with Hugh McFadden landing a monster point under severe pressure.

And when McHugh deceived Donnellan, Donegal were on their way again.

Flynn and Kevin Feely gave them a late sweat, but Donegal held on.

Murphy was a little rusty and kicked two early wides before arching over a 21st minute free.

By that stage, Flynn had already registered a goal – and might’ve had another.

There were only seven minutes on the clock when Kildare cut Donegal open. Tommy Moolick and Ben McCormack combined to set Flynn free.

Just three minutes later, Flynn thought he had hit a second Kildare goal, but Donegal were given a surprise reprieve by referee David Gough.

Kildare swept in again and Flynn easily palmed home from a McCormack centre, but referee Gough called a square ball.

The Lilywhites were hit with a further blow when centre-back Eoin Doyle was sent off in the 16th minute.

Already booked, captain Doyle was given a second yellow card for not wearing a gumshield; a decision that incensed the Kildare boss Cian O’Neill, who claimed his man was on his way to the sideline to obtain a mouthpiece when he took receipt of a kick-out from Donnellan.

Cian O’Donoghue could count himself fortunate to have been escaped a greater sanction than the yellow Gough flashed for a bruising hit that rocked Ryan McHugh.

Odhrán Mac Niallais knocked over an instant reply to Flynn’s goal, but Donegal’s attack misfired for much of the opening period.

McFadden landed a big score after 15 minutes, but it wasn’t until a pair of late fisted efforts from McBrearty that Donegal really stirred.

Although the early spring weeks were encouraging for Declan Bonner, Donegal lost all three of those games, to Kerry, Galway and Dublin.

Points did become prizes last weekend, albeit in the form of a McKenna Cup final win over Tyrone and the visit of the also-empty handed Kildare represented a must-win game for both counties.

Donegal hit five of the opening six points of the second half to hit the front, the impressive Eoghan Ban Gallagher among the scorers.

McBrearty put Donegal 0-10 to 1-4 ahead with his team’s third point in as many minutes, but Tommy Moolick fielded a high ball to tee up Kelly for Kildare’s second goal.

Again, Donegal steadied their wobbles with Murphy acing a majestic effort and Ryan McHugh curled over a now-customary point off the outside of his right.

McHugh would have another contribution before the end – and it would prove to be the telling one as Donegal, finally, got off the mark.