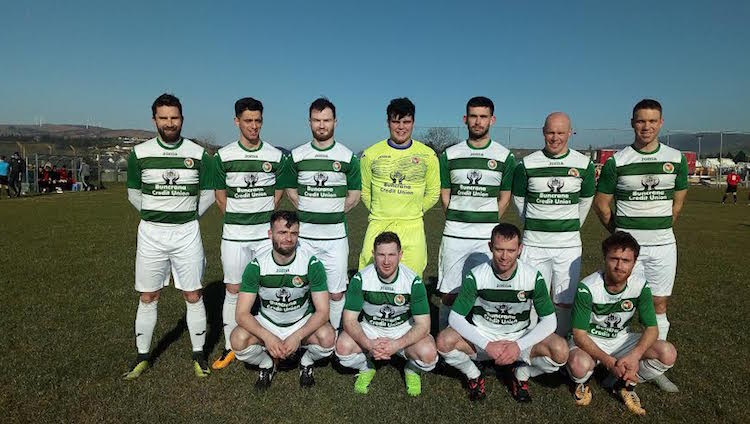 Cockhill Celtic went out on their own at the top of the Four Lanterns Ulster Senior League with a narrow win over Fanad United, while Finn Harps Reserves and Bonagee United had useful home wins.

After a frenetic opening, Cockhill had the first chance on 8 minutes when good interplay between Gerry Gill and Malachy McDermott released James Bradley but after hesitating, the chance was gone.

Cockhill took the lead on 26 minutes when Paul McDermott’s cross was diverted to his own net by Sean McElwaine.

Cockhill were buoyed by this goal and added a second on 31 minutes when a Ryan Varma cross was brilliantly headed home by James Bradley.

Against the run of play, Fanad reduced the deficit on 43 minutes when Tony NcNamee’s free kick was spilled by Lee McCarron and Oisin McMenamin was alert to slot home.

Fanad started the second half in the ascendency with Davitt Walsh having a speculative effort saved by McCarron. They spurned a great chance to equalise on 49 minutes when Jordan Toland found space on the right side of the penalty area but shot straight at McCarron.

This let-off saw a reaction from Cockhill. Mark Moran was unlucky when a deflected effort went narrowly wide on 52 minutes before they got a controversial third goal on the hour.

James Bradley played in Laurence Toland whose shot was saved by Shane Graham. Toland was first to the rebound but was forced wide. 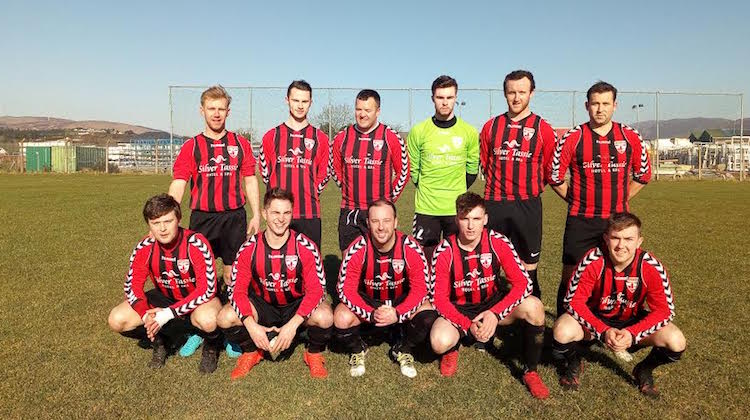 His cross shot finding Gerry Gill whose shot was adjudged to be over the line by a well placed assistant referee, despite furious Fanad protests.

The game was end to end now with Fanad pushing and Cockhill prepared to sit deep and counter attack. Fanad had a great chance on 71 minutes when another McNamee free kick found the unmarked Sean McElwaine who headed over the bar.

They did reduce the arrears on 85 minutes when a shot was deflected into the path of McNamee who calmly fired past McCarron from 12 yards.

In the end, Cockhill held on to claim all three points from what was an absorbing encounter.

On a crisp spring evening in Bonagee, the home side welcomed near neighbours Swilly Rovers and won this contest by five goals to nil in a game that the hosts dominated from start to finish.

Bonagee took the lead in the 14th minute, when Ciaran Curran ran half the length of the pitch and somehow managed to squeeze an effort just in under the crossbar from 30 yards out.

That lead was doubled on the half hour mark.  A corner from Curran from the right hand side was headed home at the back post by Dean Larkin.

The home started the second half brightly and extended their lead just two minutes after the restart.  Michael Doherty, who was excellent throughout, played in Matty Harkin and the Bonagee frontman made no mistake from ten yards.

Bonagee had further chances through Larkin and Harkin, but they didn’t score their fourth until the 83rd minute.  This time Harkin got his second following a cross from Kevin Barr.

The scoring was completed one minute later, when Kevin Barr lobbed the keeper from 12 yards.

Best for Bonagee were Barr and Matty Harkin, while it was a team effort from the men from Ramelton

Finn Harps Reserves moved up to fourth in the table following what could be considered a surprise victory over Derry City Reserves at a sunny but chilly New Camp Complex on Saturday afternoon.

The home side took the lead halfway through the first half when full back Michael Gallagher, a graduate from last season u17 side, finished with aplomb after driving forward from his own half.

Harps had signalled their intent before taking the lead with lively right winger Dylan McCroary creating chances for both Duffy and Walsh. Derry as always were impressive in possession but found chances were limited against a central defense superbly marshalled by Paul Ferry and Keenan Diver.

Indeed Harps headed for the interval disappointed not to go in further ahead as great chances for McAteer, Duffy and McCroary all came and went but one would have guessed

Manager Joe Boyle’s half time team talk would have.asked for more of the same. As expected Derry came out for the second half with increased vigour and the Harps bench may have wondered whether they would rue missed chances come the final whistle.

Having made changes Derry managed to enjoy increased possession and the Candystripes did manage to force the Finnsiders into conceding a number of free kicks in threatening positions.

However harps keeper Jamie Bell confidently fielded all incoming crosses and Derry will have been disappointed with the lack of efforts on target.

Young centre forward Duffy played his part by chasing everything played into the Derry half as Harps looked to close out the game.

In the closing minutes victory was sealed for the home side when substitute Daniel Stolarczyk rifled home a spectacular effort from outside the box.

USL – Cockhill go back out on their own at top with win over Fanad was last modified: February 25th, 2018 by Chris McNulty
Tags:
Cockhill CelticFANAD UNITEDUlster Senior League