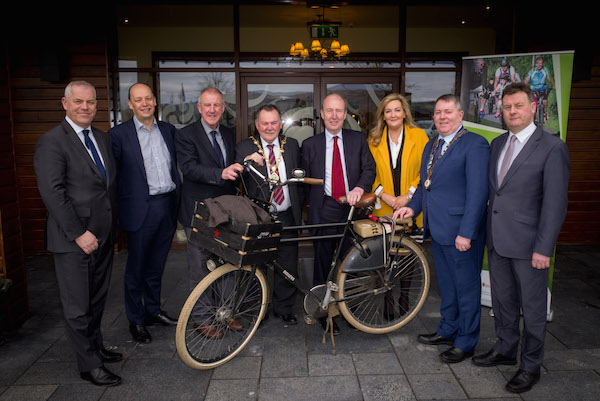 The historic An Grianán Fort overlooking Lough Swilly provided the stunning backdrop for the official launch of the North West Greenway Network today.

Upon completion the project will deliver 46.5 km of new cross-border greenway that will help reduce carbon emissions by encouraging commuters to leave their cars at home.

The €14.85m project is the largest of three separate greenways to be funded under the EU’s INTERREG VA Programme, managed by the Special EU Programmes Body (SEUPB).

Project partner Sustrans has appointed an ‘Active Travel Officer’ who will undertake a widespread engagement programme with local schools, workplaces and community groups to raise awareness of the greenway, during its construction, and encourage more sustainable methods of travel.

A catchment area has been identified within which route corridor options are being appraised and a final road map for the project will be agreed upon over the coming months.

Throughout the spring and summer, route options will be presented to the public, for comprehensive feedback, at a series of widely publicised public engagement events to be held in venues across both council areas.

Match-funding for the project has been provided by the Department for Infrastructure in Northern Ireland and the Department of Transport, Tourism and Sport in Ireland.

He said ‘We have an opportunity, through our commitment in the Programme for Partnership government, and in our new National Planning Framework and National Development Plan to build more greenways throughout Ireland and to provide more localities with the opportunity to benefit from such investment in the same way as communities in Mayo, Waterford, Monaghan and Armagh.

“On the day that’s in it I must also acknowledge and thank all those involved in delivering this initiative; the European Union’s INTERREG VA Programme, managed by the Special EU Programmes Body (SEUPB), my officials in the Department of Transport, Tourism and Sport in Ireland and the Department for Infrastructure in Northern Ireland, Derry City and Strabane District Council, Donegal County Council and Sustrans. I very much look forward to making use of it in the future and I encourage you all to do likewise.’

Mr Peter May, Permanent Secretary, Department for Infrastructure said: ‘Encouraging greater use of active travel is a draft Programme for Government commitment and the development of greenways has an important role to play in achieving this. He continued: ‘The Department for Infrastructure’s Exercise – Explore – Enjoy: a Strategic Plan for Greenways document sets out an ambition for the creation of a 1,000km network across Northern Ireland with the intention of promoting active travel and strongly supporting improved health and wellbeing for everyone. This project fits exceptionally well with the sustainable travel agenda of the Department and is an excellent example of cross-border cooperation and partnership between Derry City and Strabane District Council and Donegal County Council.’

Speaking at the launch event Gina McIntyre, CEO of the SEUPB said: “Greenways are a great way to connect people and places, on a cross-border basis. They provide travel routes for commuters, reduce our dependence on cars, decrease carbon emissions and promote the physical health and well-being of those using them.’

She continued: ‘We recognise the positive impact that they make to a region, and therefore have made awards of €23 million worth of INTERREG VA funding, for three separate greenway projects that will open up new sustainable travel routes across Northern Ireland and the Border Region of Ireland. The North West Greenway Network is the third of such projects to officially be launched and will make a real and tangible impact on the environment. ,” she continued.

The Mayor of Derry City and Strabane District Council, Councillor Maolíosa McHugh, said: ‘This is a significant development for the greenway project. Coupled with the North West Multimodal Transport Hub, which is also funded by INTERREG VA, Derry and Strabane will be ideally placed to encourage a modal shift from car to public transport and other sustainable modes by providing integrated and convenient services to encourage more active travel for a healthier region.’

The Cathaoirleach of Donegal County Council, Cllr Gerry McMonagle also welcomed the official launch of the greenway initiative saying: ‘the greenway network is another tangible example of both councils working closely together to deliver growth and sustainability to the north-west region. He concluded: ‘the Project Partners welcome this cross-border collaboration and SEUPB’s commitment to Donegal, Derry and Tyrone.’

‘Commenting on the appointment of the Active Travel Officer, Gordon Clarke, National Director of Sustrans Northern Ireland and Republic of Ireland said: ‘this is a fantastic opportunity for the new officer to work with schools, workplaces and communities to create the maximum modal shift towards sustainable active travel.’

The North West Greenway Network was officially launched today at a function in An Grianán Hotel, Speenoge, Burt.