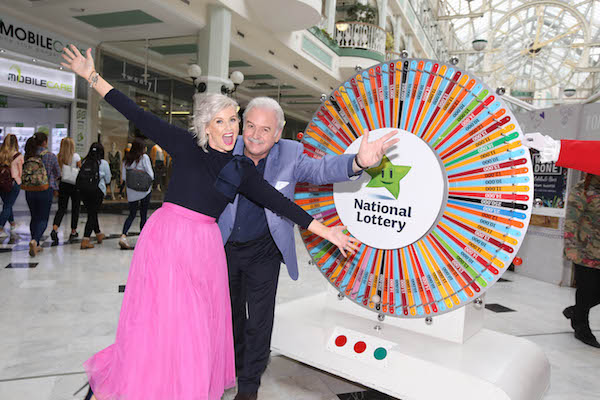 Donegal nurse Bernie getting ready to go on a Winning Streak!

A Donegal nurse is planning on going on a Winning Streak when she appears on the National Lottery game show on RTE One this Saturday night.

Bernie McGuigan, who lives in Malahide, Co. Dublin, but originally from Co. Donegal was at the Elbow gig in the 3 Arena on Saturday with her husband, sister and brother-in-law when her phone was hopping with calls.

She soon realised she had been selected to appear on the popular game sh and such was the excitement she remembers little from the concert!

Bernie (44) works in a GP practice in Malahide village. She is relatively new to the job having spent 18 amazing years working in paediatric nursing in Temple Street Children’s Hospital.

Originally from Mountcharles, Bernie did her nurse training in Great Ormond Street, London, before returning to Dublin where she met her husband of 11 years Macarten (Mac), The couple have two children: Liam (9) and Aoife (7) and says she is outnumbered three to one when it comes to GAA football matches!

Bernie loves GAA and is a Donegal fan through and through despite living in a house with three Dubs. Liam plays hurling and football for St Sylvester’s GAA club in Malahide. In her spare time Bernie enjoys Pilates and yoga.

Her parents, Hilda and John Joe, are as excited as Bernie is about her appearance on the show, and her mother is a longtime fan. They are looking forward to the trip to RTE along with a posse of other family members from Mountcharles to cheer Bernie on. Also attending are her four sisters, Kate, Mags, Hilda Jnr and Eimear, as well as her brothers Sean and Peter.

The next episode of Winning Streak, will be broadcast next Saturday evening (3rd March) at 8:15pm on RTÉ One, where presenters Marty Whelan and Sinead Kennedy will guide five players through the iconic show, which gives them the chance to win cash, cars and luxury holidays. One will get the once-in-a-lifetime chance to spin the Grand Prize Wheel with a maximum prize of €500,000.