Emily Kelly recalls experience of a lifetime at Millrose Games

Last February, Emily Kelly had the experience of a lifetime running at the famous Millrose Games in New York.

The St Mary’s NS pupil had won the title of ‘Ireland’s Fastest Feet’ in December 2016 having come through the county heats.

While the chance to head Stateside to the Millrose Games has now ceased due to the absence of funding, local athletics personnel have kept up the county’s own competition.

On Tuesday evening, hundreds of children competed at the Finn Valley Centre to get the title of Donegal’s Fastest Children.

Emily, who is in fourth class, was in to cheer on her sister, Maria, and looked back to her own big adventure.

“It was nice and exciting. There was a big crowd and they were all cheering away,” she said. 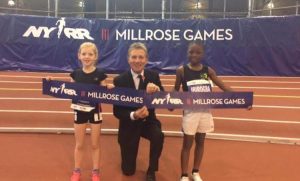 “It was really big, the stadium. That was my favourite bit. There was a big party at school before I went away.”

Emily was accompanied on the five-day trip to New York by her mum and dad, Anne-Marie and David, and sister Maria.

In the big race, Emily finished in third place.

“I ran really fast, I just loved it,” she smiled.

It’s a shame that others won’t get the chance to taste a similar experience.