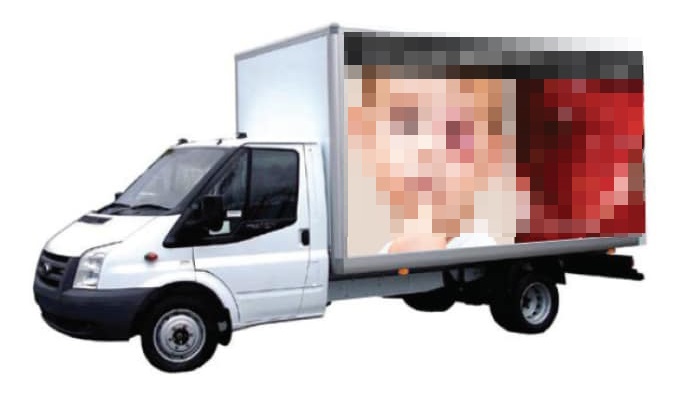 Pro-life campaigners brought a van with a graphic anti-abortion display into Buncrana last week, resulting in an incident in which Gardai were called.

The van, operated by the Irish Centre for Bio-Ethical Reform, was parked on Main Street on Thursday 22nd February, as campaigners stood in the area distributing leaflets.

A local member of the Inishowen Abortion Rights Campaign accused the group of “deliberately targeting” her business in the incident, the Inishowen Independent reports.

Bauke Roof, who runs Inishowen Vapours on the Main Street, said she was “shocked and appalled” after a van emblazoned with very graphic images of bloody foetuses was parked in front of her business last Thursday afternoon.

Half a dozen pro-life demonstrators, including local man Brian Flanagan, all of them wearing small CCTV cameras on their clothing, then gathered outside the shop, distributing leaflets to passersby.

Ms Roof, a prominent member of the Abortion Rights Campaign, described the incident as a “stunt” and said she will not be deterred in her bid to help repeal the Eighth Amendment.

“I will not stop trying to get the message out. This doesn’t faze me whatsoever, in fact it has made me more determined than ever.”

“My shop was obviously targeted and my customers shouldn’t have been exposed to such obscene images. I would be particularly concerned about mothers who have had miscarriages having to witness such graphic images,” she said.

“All they want to do is shock people, rather than informing them of the truth. They have shown a complete lack of respect,” she added.

Sinead Stewart, who was working in the shop at the time of the incident, called the guards, who quickly arrived on the scene and “took details”.

Ms Stewart, who was wearing a ‘Repeal The Eighth’ t-shirt, claimed the pro-life demonstrators passed up several free parking spaces before parking their van directly in front of Inishowen Vapours.

However Mr Flanagan strongly denied any suggestion that the group had deliberately staged a protest outside Ms Roof’s business, calling it “just a coincidence”.

He revealed that the pro-life demonstrators, who had earlier unfurled a banner at the Courthouse, had encountered some locals who were “delighted” by their stance and others who were “bitterly opposed”.

He described abortion as “open heart surgery on Ireland” and defended the use of graphic imagery on the pro-life van as “the facts of abortion”.

“You can’t argue with a fact,” he claimed.

After the guards arrived, the situation calmed and the pro-life demonstrators left the area, though the responding officers stressed that they were not asked to move on but did so of their own volition.

Meanwhile the abortion referendum will be held at the end of May, though an exact date has not yet been fixed.