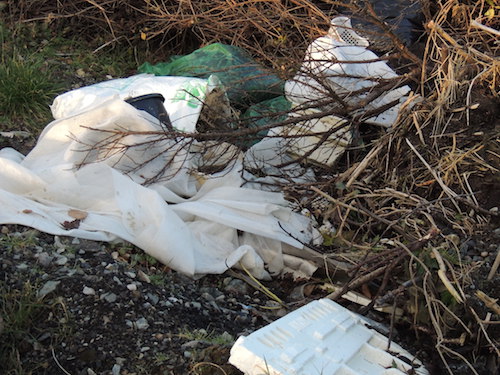 Locals have slammed dumpers who are continuing to discard waste illegally on a roadside field outside Clonmany.

One man, who did not wish to be named publicly, said the problem has been ongoing for “a long time” but has recently been exacerbated by fresh loads of rubbish.

The dumpsite is located along the main road between Buncrana and Clonmany and the man said it is a growing “eyesore”, particularly with the Irish Open at Ballyliffin fast approaching.

He said: “This is going to be some welcome for the Irish Open. A load of rubbish and a disgusting eyesore, a sight that you can’t miss as you drive towards Clonmany and Ballyliffin.”

The dump, in the townland of Altahalla, sits atop large mounds of mud and clay and can be clearly seen from the main R238 road, which will be used by golf fans travelling to the Irish Open in July.

Much of the rubbish is visible from the road but further items have been dumped down the banks of a small river and cannot be seen from the road.

“I think it’s high time that the council did something about this, as it appears to be getting worse and worse – and no one is doing anything about it,” the man said.