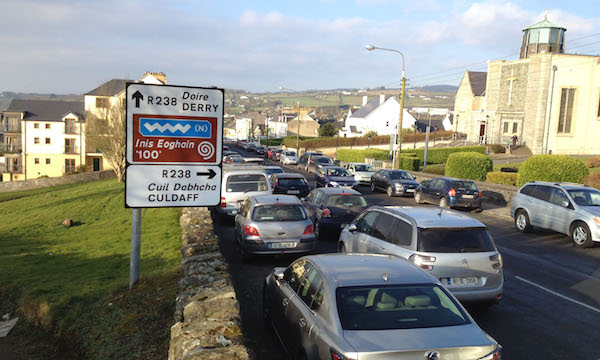 Mass congestion could be ‘parked’ with new proposal for Donegal church

A county councillor is proposing a new public car park in Moville to alleviate a long-running problem of double-parking during Mass times in the seaside town.

Cllr Martin Farren says the car park, which would be situated in a “little-used” section of the Moville Green across from St Pius X Church, would also “open up the whole top of the town”.

“I think this could be a good solution to the problem of double-parking during Mass as well as during other Church functions such as funerals and weddings.”

However Cllr Farren says the problem is much worse during Saturday night Mass.

“On a Saturday evening cars are backed up all the way to Ballynally Lane but this new car park would take away the need for double parking along the road.”

He says the proposed development, currently at the council design stage, would be carried out “very sensitively”.

“As a Moville man, I understand that the Green and shore walk are very important amenities and this would be carried out without impinging on the Green. We are talking about a small section of the Green that no one uses.”

“The new car park could also incorporate a picnic area and would provide fantastic views out over Lough Foyle. Hopefully, the existing paths could be retained too, as well as the stonewall, which would obviously require new opening and exit access points for cars.”

“Car parking is a problem for people coming to Mass. Through no fault of their own and due to a lack of space, they are having to double park.”

“But if this could be the solution to that problem then that would be great,” he added.

Meanwhile, Cllr Farren says he has spoken to a number of Moville business owners and locals who are also enthusiastic about the prospect of additional car parking spaces.

“A lot of new businesses have opened up in that area of the town in recent times and I think the extra spaces would be a big help, particularly during the summer months, when there are often very few spaces available.”

Cllr Farren says the project would “cost a few pound” but would be “worth it” in the end, in order to accommodate a growing number of vehicles in the 21st century.

“We have to move forward, and I’m determined to do the best I can for the area – without impacting on the Green.”

“I think this is a good proposal and I hope it gets the backing of people in the town.”