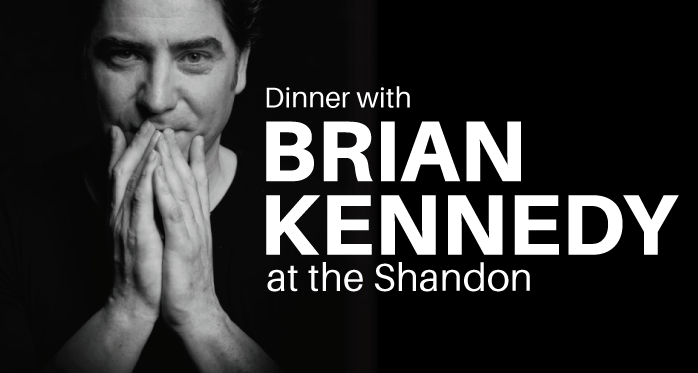 Brilliant Brian Kennedy dinner event is back by popular demand

The next Dinner with Brian Kennedy event takes place on March 22nd 2018. Guests are invited to enjoy Shandon G&T drinks reception and a sumptuous 4-course gourmet meal before Brian Kennedy takes to the stage to perform.

Brian last performed on the 21st September 2017 to a sell-out show and he ‘wowed’ the audience with his humour and amazing performance, he even joined our guests on the dance floor to conclude a spectacular show! 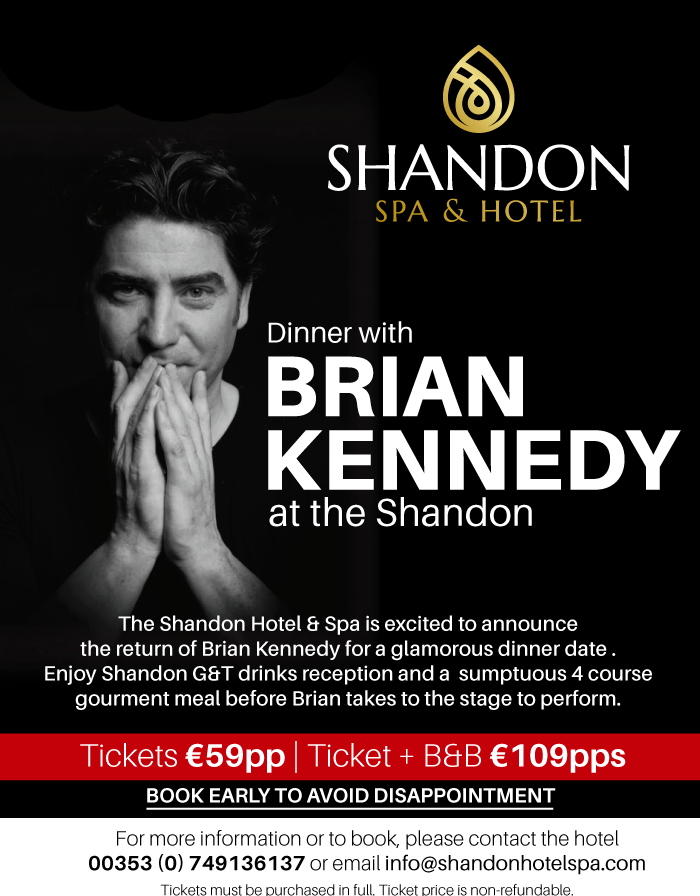 Brian Kennedy survived a childhood on the infamous Falls Road, West Belfast at the height of its hellish history against all the odds to carve an extraordinary career in music.

In his own words he says, “It’s a miracle that I survived my childhood and became a singer really, given where and how my life started, but somehow my voice had other plans and saved me in the end.” That voice set him on a course that changed his whole life forever.

From harmonising with ambulance sirens as a child to finally overcoming stage fright, his gradual ascent was nothing short of incredible. He busked on the dangerous streets of his hometown whatever the political weather until a sudden escape to London, when only 18 saw him surviving in the only way he knew how. He sang unaccompanied in the underground stations and outside the Dominion Theatre, sometimes literally in order to eat and until he finally saved up enough money for a guitar.

Brian is first and foremost a live performer and songwriter. As he bluntly puts it himself, “Music is my lifeblood.” His constant touring from Ireland and the UK to Australia, Germany and the USA, including the major global festivals, has resulted in an ever-growing international fan base the old fashioned way, over a phenomenal twenty-five year career on the rollercoaster ride that is the unpredictable music industry.

His work with Van Morrison has been well documented. The Belfast legend invited Brian to a rehearsal one day that resulted in him being featured as guest lead singer on the now unforgettable ‘Blues & Soul Revue’. Courtesy of Van’s continuing mentoring and generosity, Brian ended up sharing vocal duties on stages across the globe over a six-year period with Morrison and a breathtaking cast of some of the greatest artists in history: Joni Mitchell, Bob Dylan, Ray Charles and John Lee Hooker to name but a few. Madison Square Gardens was a far cry from the Falls Road. That unique Irish voice can be heard harmonising and answering Van on five of his major hit albums including “A Night In San Francisco” to “Days Like This”.

As if that wasn’t impressive enough, you might be less familiar with Brian’s impromptu performances with Stevie Wonder at Ronnie Scotts in London. Incredibly and proudly he is one of only a few to have also sung with the late legendary Jeff Buckley at Sin-É in New York.

Throughout the relentless touring with Van Morrison, Brian somehow managed to maintain a stream of chart-making albums. ‘A Better Man’ (1996) and ‘Now That I Know What I Want’ (1999), both went platinum at No.1 and earned him the awards of Irish Best Male Artist and Irish Best Male Album, as did the highly acclaimed ‘Homebird’ (2006) and cover album ‘Interpretations’ (2008). But it was Brian’s heart wrenching LIVE performance of ‘You Raise Me Up’ at the funeral of football Legend George Best that earned him a spot in the top 5 of the UK charts.

He is a natural TV & Radio host as well as lead performer on diverse international stages, from his Role in New York’s Riverdance on Broadway for 9 months of over 300 performances to Eurovision 2006 in Athens. Remarkably Brian also found time to write and publish 2 fiction novels that were an instant success and he continues to receive many prestigious awards, including the 2010 Ireland Meteor Lifetime Achievement Award for Music, and an even rarer Honorary Doctorate Degree of Letters by the University of Ulster for his contribution to literature and Arts.

In 2016 Brian was busy in the studio recording a 32 track double CD ‘Essential Collection’ comprising all brand new recordings from the past and present including a duet with Boy George. Brian maintains that “music is the language of emotion,” and after all his years gigging and recording with Van Morrison he prizes the live gig above all else, “ Van always said you’re only as good as your last gig”. Seeing and hearing is the only way to experience this national treasure of a man.

During October 2016, Brian celebrated two birthdays. His iconic album ‘A Better Man’ turned 20 and that same week the man himself turned 50, so what better place to celebrate than on stage doing what he loves best. He performed the entire album in Dublin’s prestigious Vicar Street venue on October 13th 2016 and it is in the process of being related this year on CD/DVD on his own label.

Last year saw Brian begin a challenging journey with cancer and he cites singing and performing as the motivation for staying positive. In Brian’s words: “The gigs make everything worthwhile, the fans’ support means the world to me, if anything the diagnosis and treatment has given me greater focus and determination to get through it all. Music is the ultimate healer and my voice has never let me down.” Seeing him perform live is all the proof that’s needed.

Well over two decades later and Brian genuinely feels like he is only really getting into his stride. So, what else is left for a multi-platinum selling singer/songwriter, highly regarded radio & television presenter, an Honorary Doctor of Letters from The University of Ulster, a published author of two successful novels – not surprisingly, for a lyricist of his calibre. “Dr Kennedy” simply raises those eyebrows and answers playfully, ” Ah sure I’m only getting started!”

Tickets must be purchased in full. Ticket price is non-refundable.