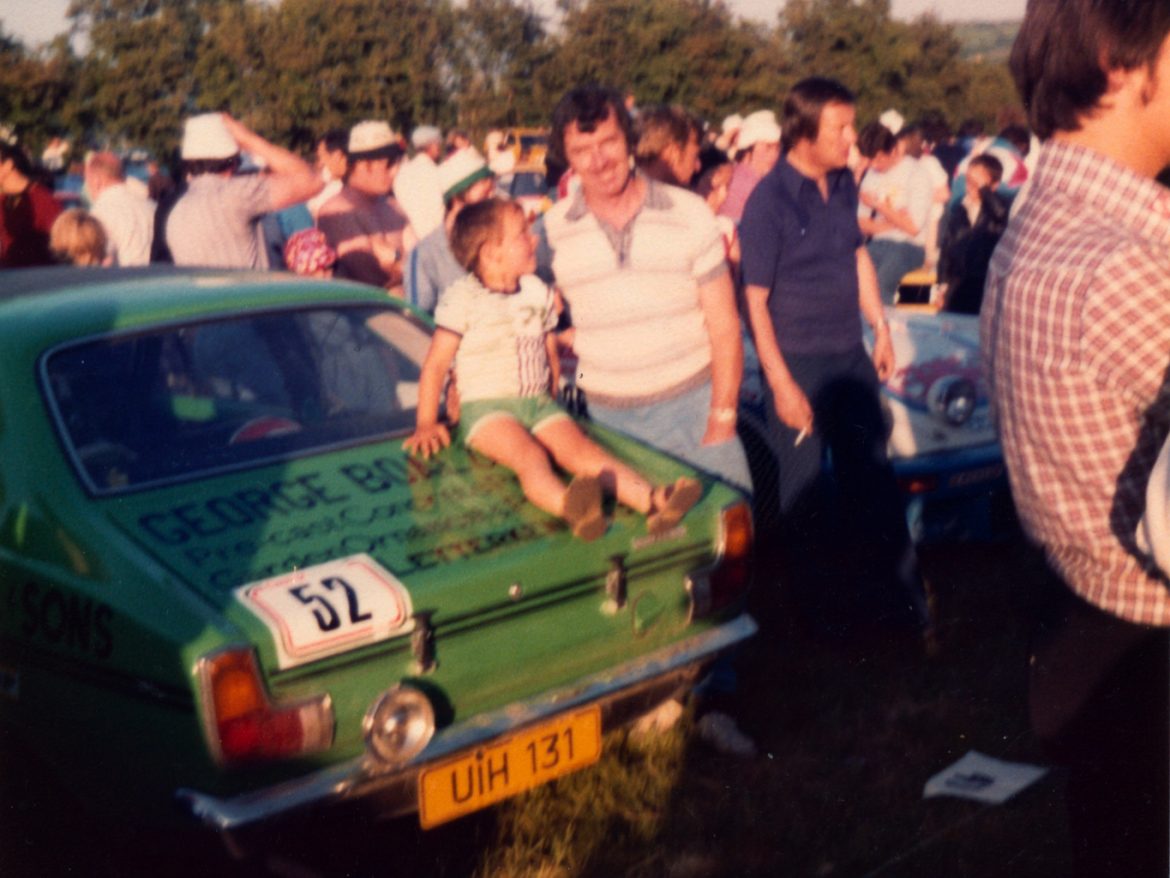 The Pulse nightclub in Letterkenny have boosted the heartbeat of Donegal Motor Club for 2018 and have come on as an additional local sponsor along with Joule to ensure the success of the single biggest crowd puller in Co. Donegal.

Sponsorship like this is the lifeblood of the Donegal Rally. Included this week are some of the memories of products and stars that made their name in the Hills of Donegal over the rally weekend in June over the years.

Flying Carpets
I don’t think I have ever seen a Tuca Tile! But I spent the seventies thinking about Tuca Tiles day and night. These were the days long before Ground Force and Charlie Dimmock, Grand Designs, or even Room to Improve! So it wasn’t through the TV that I knew about these tiles.

Tuca Tiles was a company set up in Dublin in the seventies, but it was in Donegal the company decided to do their biggest marketing drive!

Brian Nelson from Lisburn won the Donegal International in a Porsche Carrera. His car was covered in green Tuca Tiles! I didn’t know if Tuca Tiles were made by Tuc Biscuits! Or were they Tiles for the roof of your house or your bathroom wall or for your floor! And to be honest, I didn’t care! 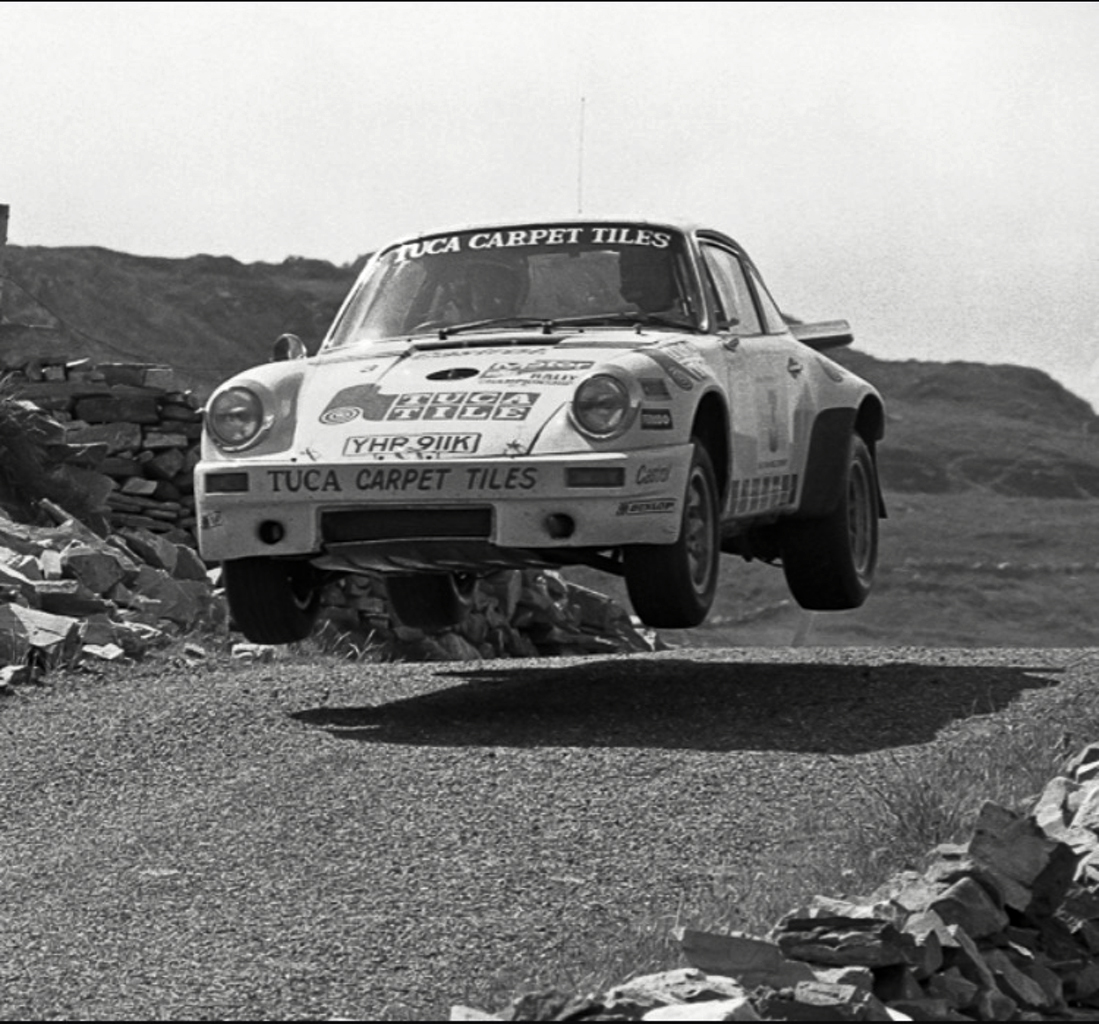 Back in the day if you heard anyone talking about Tuca Tiles in Donegal they were associated with the Donegal International Rally, a Porsche Carrera’s and special stages. It turned out they were Tuca Carpet Tiles and only recently I learn that my late aunt Rosaleen knew more about Brian Nelson and his rally cars than me!

My aunt Rosaleen Gill owned a B&B on the Back Rd in Letterkenny, she told the yarn about the rally driver, Brian Nelson who stayed with her for the rally weekend. They landed a couple of days before the event and were out testing the car. That evening Brian Nelson was complementing his team over dinner in Rosaleen’s B&B on how good the car was over the jumps. At the end of the meal Brian ask my aunt Rosaleen if they could put the rally car into her garage overnight.

“Surely,” she said, “but only if it’s good over jumps?” “Why?”, Nelson politely asked. “Ahh!!”, Rosaleen explained that they would have to jump the car up into the garage, as her garage door was two feet higher than the driveway on her newly built house which she was completing at the time.

Brian Nelson didn’t manage to park his Porsche in the B&B garage but did fly high that year in his Tuca Carpet Tile Porsche and won the Donegal rally in 1976 and won again in ’79 in a beautiful David Sutton RS1800 which was also covered in the green Tuca “flying” Carpet Tiles.

Promoting brand names in Donegal
This was only one of the many products that were advertised through rallying in them days. Downtown Radio and Primark both were promoted through John Lyons who won the rally back to back in 1981/82 in his RS1800, mention McHale and you think of Xtravision think of Fisher and ToughMac Glass comes to mind and even Squeez Orange Juice was promoted on Brendan Fegan’s Vauxhall Chevette. 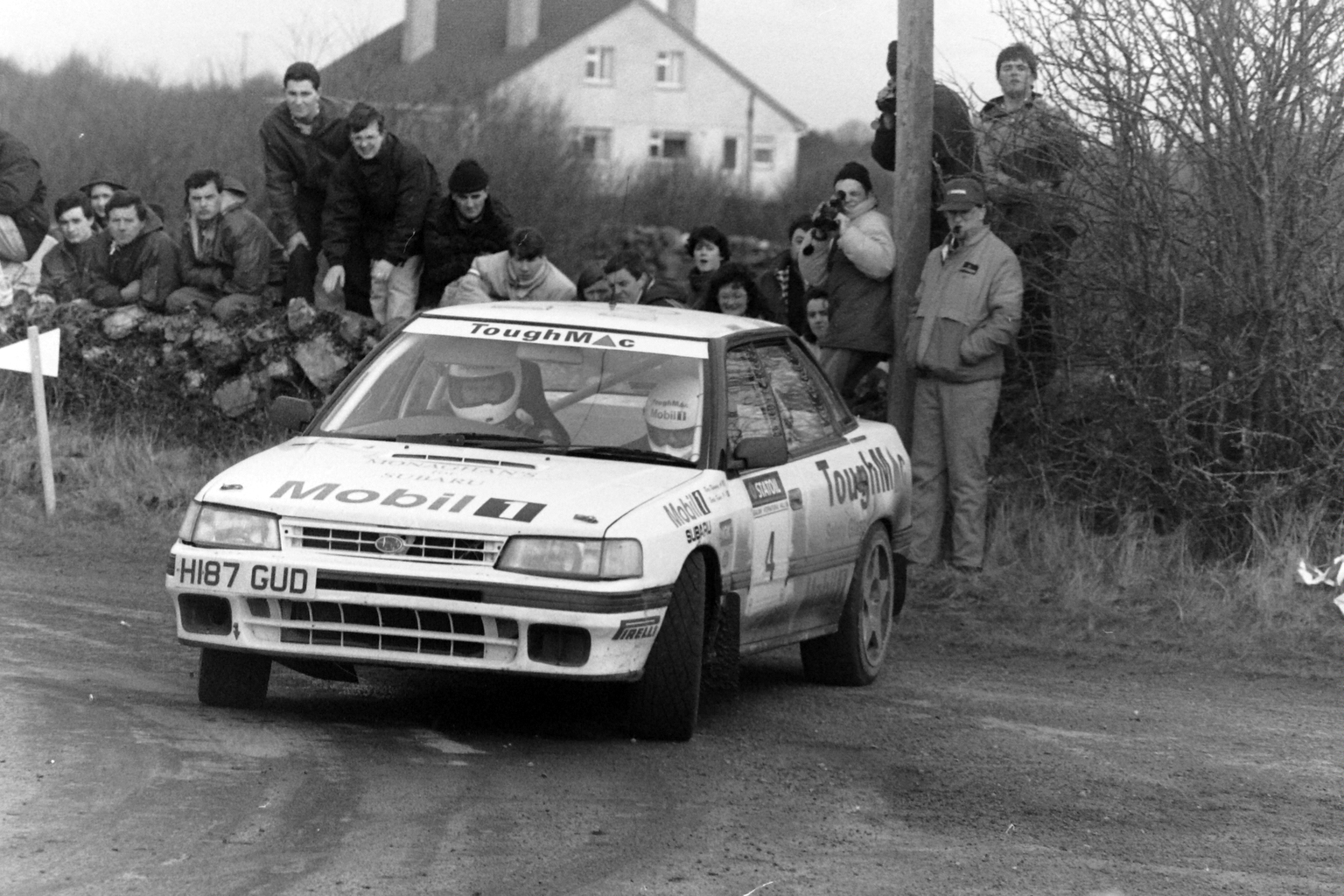 All of these companies were new to the market and had to hit the road running. 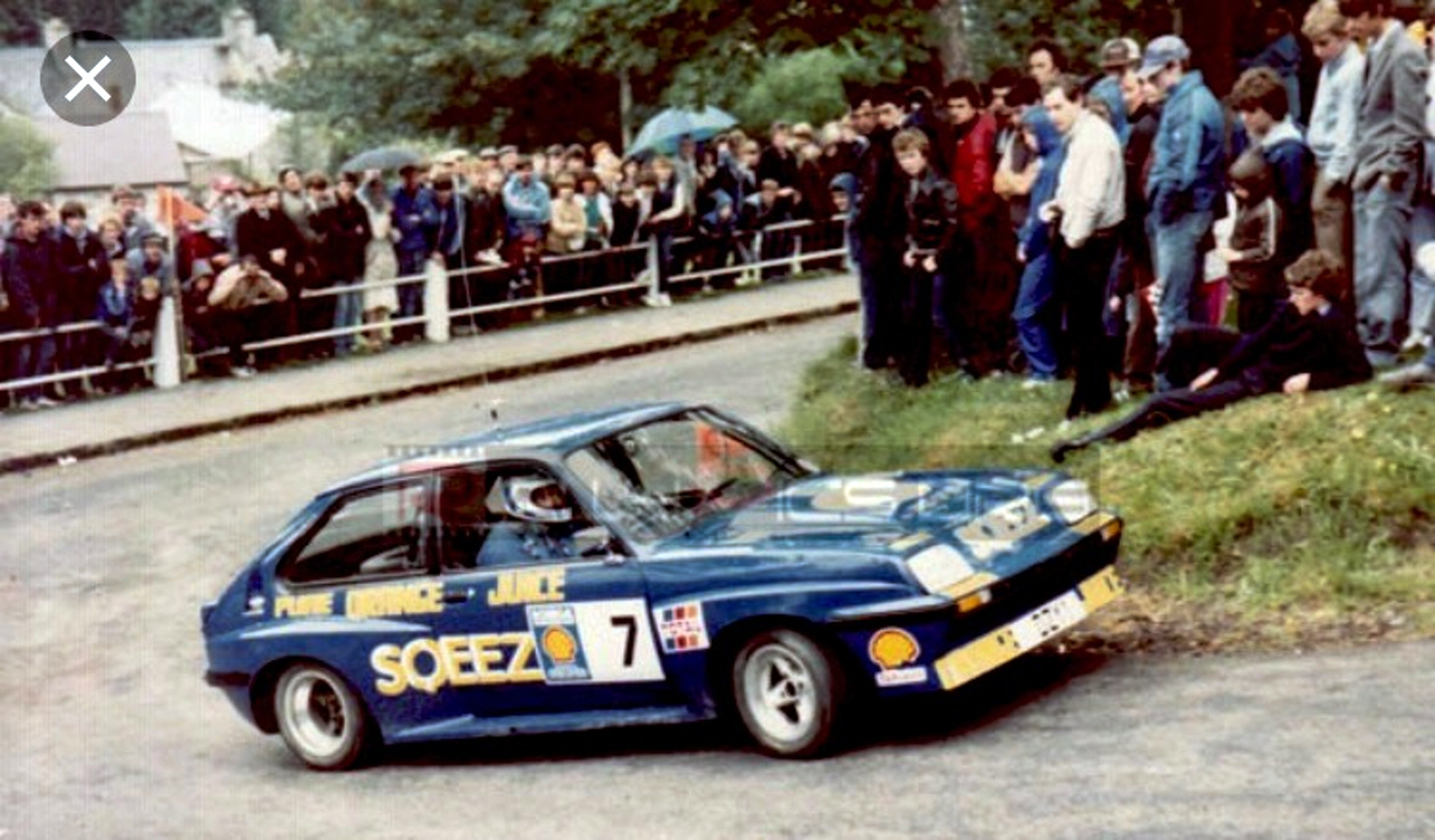 Brian Fegan in his “Squeez” put orange juice sponsored Vauxhal Chevette on The Donegal Rally on the Ramelton stage.

Their branding was bold but all were clear to be seen in the rally cars that made their way through the crowd packed stages in a June weekend ever year for the three days of the Donegal Rally.

The famous Radio Luxembourg even added its name to the rally in 1975 as its principal sponsor thanks to a word from one of the competitors on the event, songwriter Phil Coulter.

Then it was the turn of Castrol Oil who sponsored when the chequered flag Lancia Stratus, driven by Billy Coleman, won, followed by Ari Vatenan, Brian Nelson and Jimmy McCrea in the late 70’s before local company Donegal Oil Co. and Shell became the principal sponsor continuing through to the Shell’s name change to Topaz before the present day Sponsor, Joule.

Stars in Small Cars
In the summer of 1975 young rally crew headed up to Donegal, one had a gift of the gab and the other had very little English! One managed to talk the local Opel dealer, Andy Hegarty into lending them a car to do their recce, the other managed to roll the car while in reverse gear!

That year the man with the gift of the gab was a Welsh Man called David Richards. He was the co-driver. He also managed to talk Dealer Opel Team into giving his team mate from Finland, Ari Vatenan an Opel Ascona for the Donegal Rally. That year this crew rearranged a lot of ditches in Donegal. 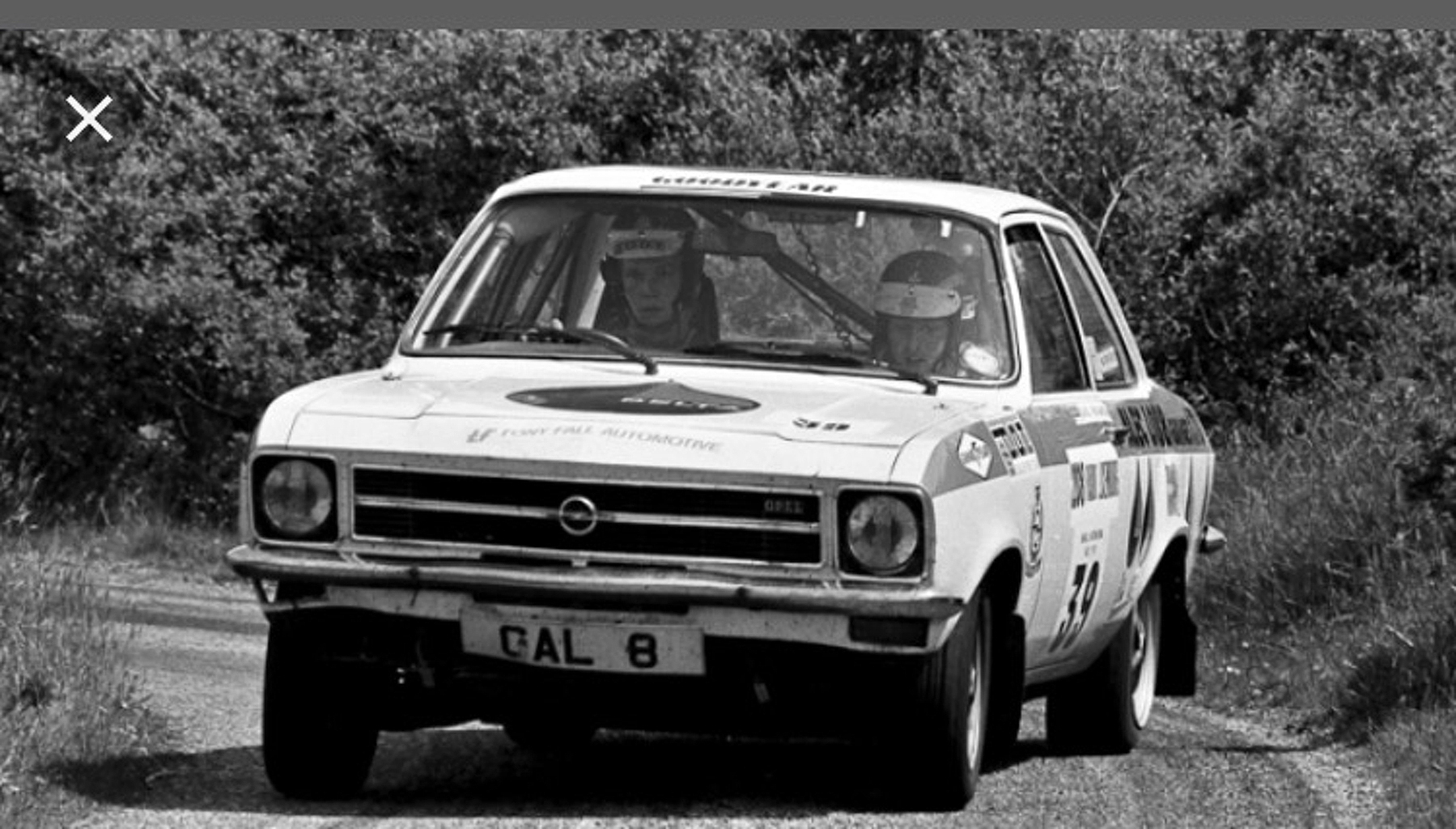 Ari blamed the steering wheel which was on the right hand side of the car but on the wrong side for the young “flying Fin”. I’d love to have been a fly on the wall in Ballymacool when David Richards tried to translate that to Andy Hegarty why his Opel looked so modified!

What did David Richards know about the Donegal rally that others didn’t back in 1975!

He knew that the Hills of Donegal in June was the place to network when he brought a future World champion in Ari Vatenan to Co Donegal. It was the place to be if you had the right ingredients for success. Rallying was David Richards whole being and when on to become the boss of Prodrive one of the most successful motorsport teams and it would be nice to think he cut his motorsport management molars in the Hills of Donegal.

Local lads
Locally in the seventies, young rally teams were getting much-needed sponsorship from local businessmen in their area. George Boal started working at the side of the house in the yard making the all-new precast concrete products. As George built his business at the Mountain Top.

George was one of the first to use motorsport to promote his business through a local rally driver, Eamon Harvey, all of Eamon’s Hilman Avengers carried Local business “George Boal and Sons” name on the rear quarter panel and boot lid for the Donegal Rally every year. 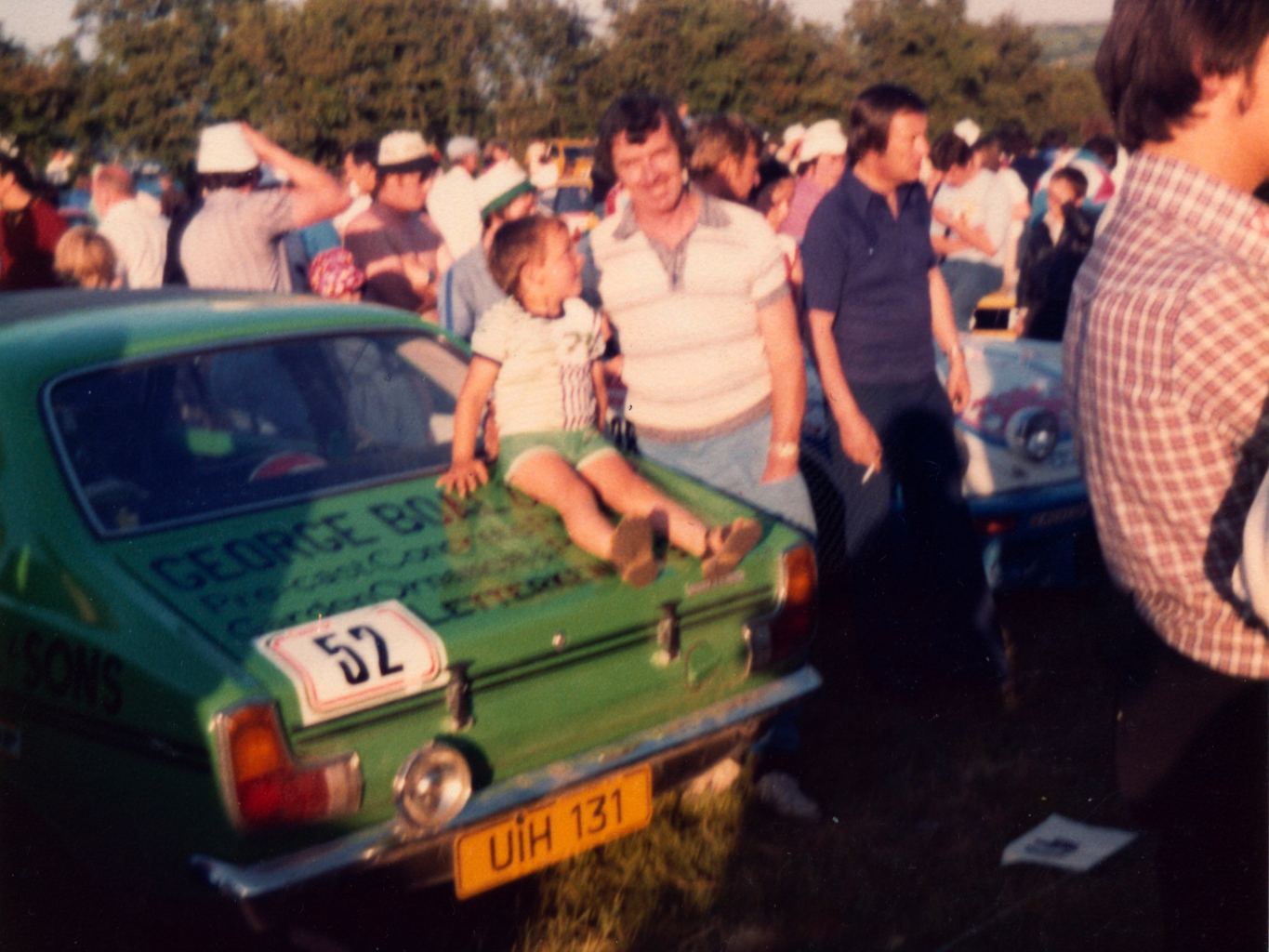 Ricki Boal sitting on the boot lid with the late Eamon Harvey and his Old Hilman Avenger Rally Car. The are pictured in a field (Parc Ferme) behind the Mt. Errigal what was once called the Ballyraine Hotel. George Boal was one of the people that supported rallying and local crews in the early days.

In them days as was the norm, Eamon’s rally car double up as the family car and would be on regular show in Letterkenny. Promoting sponsors all the time on the run-up to a rally. Even Carrie, Eamon’s wife was spotted on occasions in Bests Supermarket at the “foot of the town” in Eamon’s Avenger rally car doing her shopping.

Local business people like, Brian Grieve and Son Auctioneers, The Swilly Inn, Downtown and the Golden Grill all were sponsors from Letterkenny for Eamon And Noel Harvey in them early days. They played their part in the success of the rally by getting behind local drivers through sponsorship. 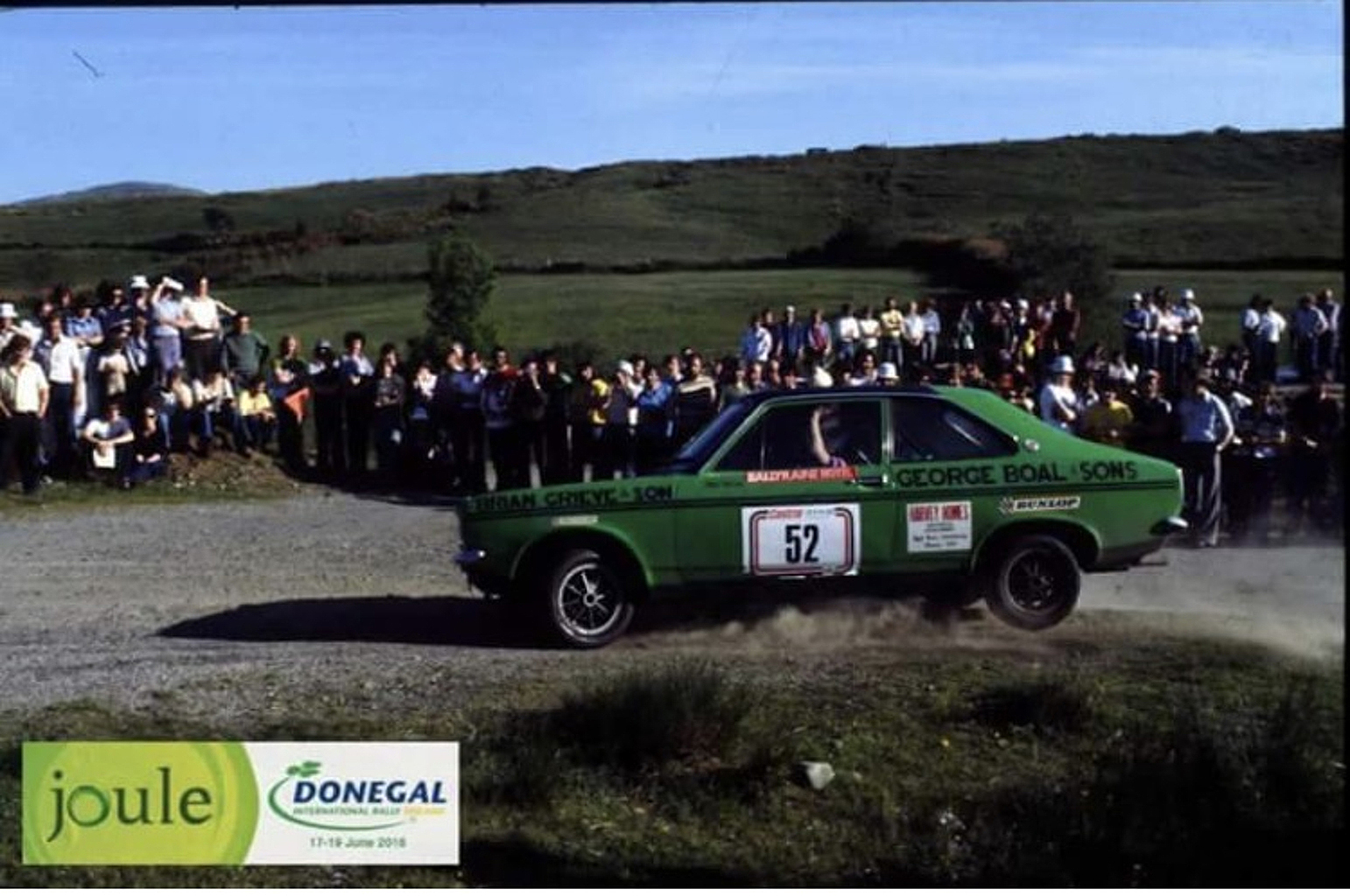 Today George Boal has progressed from making precast products to one of the biggest privately owned business in Letterkenny Pine Hill Industrial Estate at the Mountain Top in Letterkenny.

These are only the memories of three teams that took part in the Donegal rally since it started in the early seventies.

And how Motorsport works so well with sponsorship if it is done right so the customers brand can get the message across to the thousands that arrived in Donegal for the Rally.