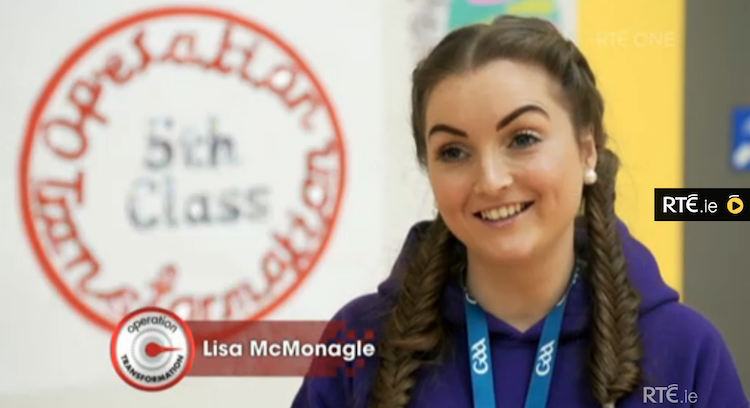 Lisa, from Glenwood Park in Letterkenny, featured on the hit RTÉ show after being surprised by an Operation Transformation crew, who visited her at work.

Lisa is the popular home-school liaison officer at Letterkenny Educate Together National School and was instrumental in the school’s own unique Operation Transformation.

A superb six-week programme saw pupils go through six weeks of learning the values of exercise, nutrition, team work, well being and fun.

Week one was exercise, week two focussed on nutrition, mental health was the theme for week three, having fun was week four’s aim, with teamwork taught in week five.

Week six centred on well-being which encompasses all of the previous week’s topics.

Marie Lynam, who nominated Lisa for the award, praised the ‘enormous amount of energy she put into the project and involved the whole community’.

It has been a big few weeks for LETNS, with the new school building officially opened on Friday afternoon.

The awards, RTÉ say are ‘to celebrate those that have gone out of their way to make the healthy choice the easy choice for other people across the country.

Lisa, together with family and colleagues, traveled to Dublin at the weekend for the recording of the show, which was broadcast last night.

“The excitement and joy the children have makes it so important.”

Her parents, Raymond and Mina, beamed with pride.

“It’s the proudest day of her life,” Raymond said. “She works so hard and doesn’t look for anything in return. It’s amazing. We’re so proud.”