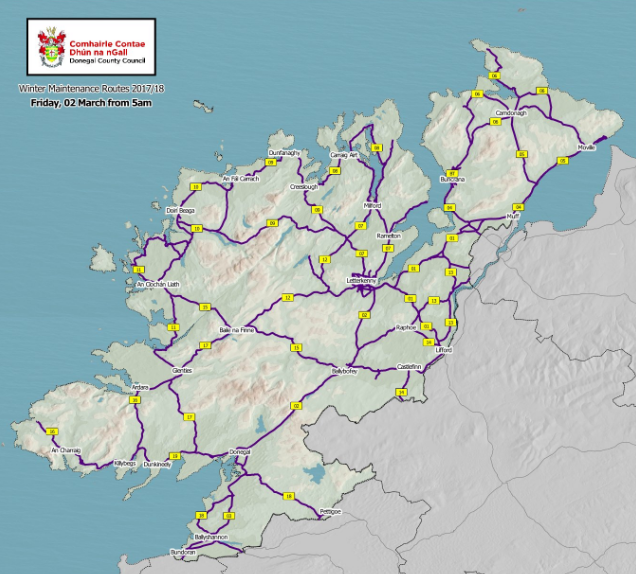 The status yellow snow-ice warning remains in place for Donegal, Leitrim, Mayo, Roscommon and Sligo and all road users are urged to exercise extra caution.

Although there was only some light sporadic snow fall across most of Donegal overnight, there were some isolated heavier snowfalls in parts including Inishowen leading to accumulations of up to 1 foot in places.

The last 48 hours have been busy for Donegal County Council gritting crews as they worked to keep all the main routes across the county open.

Gritting/ploughing trucks were deployed until 11pm last night and started again at 5am this morning. All gritters carried out double sweeps of their routes.

ALL Routes to be gritted from 5am on Friday, 02 March Check map: https://t.co/XBBLRbiznW Assume that no road is ice free #StaySafe #BeWinterReady #Donegal pic.twitter.com/kchQ56ZuJ6

All gritted routes are reported to be fine and all these roads remain open to traffic.

A spokesperson for Donegal County Council says that more than 500 tons of salt/grit have been applied in the past 24 hours.

Gritting trucks have returned to their normal winter maintenance schedule and will be deployed as per normal from 5pm this evening (Friday).

“It should be noted that some local roads remain impassable due to snow accumulations from yesterday. These are only being cleared by the Council’s Roads Service where an emergency exists.

“All gritted roads throughout the county remain passable and there are no serious disruptions to report,” the spokesperson says.

On Thursday afternoon Donegal County Council’s Civil Defence were activated by the HSE to transport patients and staff and 3 no. 4×4 vehicles with drivers and helpers were operational in this role. Operations stood down at 11.30pm on Thursday evening.

Out of Hours Calls

Donegal County Councils normal Out of Hours phone number will not be available this evening due to technical issues outside of their control, however, a temporary number has been set up – 087 638 8812 and this will be in place until 10am tomorrow morning.

Life-threatening emergencies should be reported to the emergency services on 999 or 112.

You can keep up to date on road conditions by signing up for free alerts to your phone by registering at www.mapalerter.com/donegal or by following Donegal County Council on Facebook or on Twitter @DonegalCouncil.