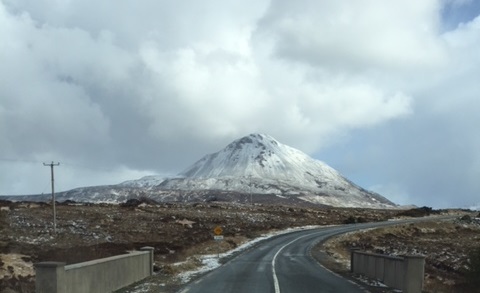 Storm Emma has passed over Ireland with widespread impact in southern and eastern counties, while most of Donegal managed to escape the worst of the forecast blizzards from the weather event.

As of this morning, the ‘Stay Indoors’ advisory which warned people not to leave their homes has been lifted.

The National Emergency Coordination Group withdrew the public safety advice to shelter indoors after confirming that the blizzard has passed. A Status Orange snow-ice warning is now in place for Donegal and nearby counties.

The local Status Orange warning will be in place until Friday at 6pm. Heavy snow showers will persist in the county today, with icy conditions prevailing due to freezing temperatures.

Munster, Leinster and Galway remain under Status Red alert until Friday evening. Met Eireann reports that between 5-12cm of snow fell during the night in areas, with severe winds leading to power cuts across some 23,800 homes and businesses.

A government warning tells people to use their own judgement of local conditions before going outside today: “There are variations in storm impact across the country and people need to take account of circumstances locally before deciding to venture outdoors or undertake journeys.”

The National Emergency Co-Ordination group warns: “Conditions are and will remain very difficult and the public are advised continue to exercise high levels of caution for their own safety in the extreme cold, accumulated snow and icy conditions underfoot.

“There are variations in storm impact across the country and people need to take account of circumstances locally before deciding to venture outdoors or undertake journeys.

“In particular, it will take some time to get roads open again and people should listen for local updates on road conditions.”