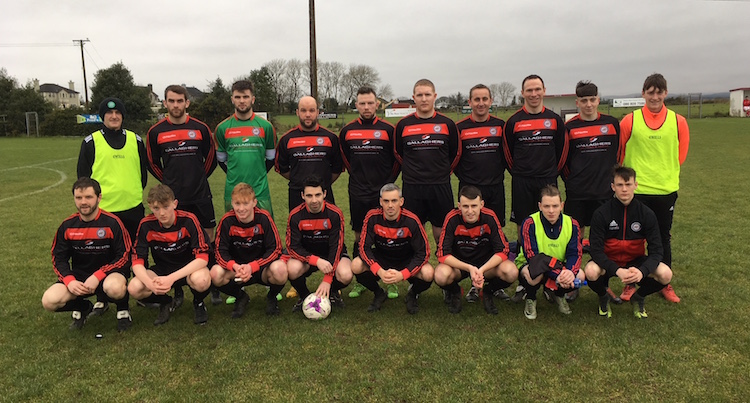 There was a large attendance at this local derby match played on Saturday at Central Park, Keadue. Michael Greene gave the home side a 6th minute lead when he converted Gavin Mc Glanaghey’s cross. With the half-time whistle ready to sound Shane O’ Donnell had Strand’s first real goal attempt but Keadue netminder Declan Ward was equal to the task. Gavin Mc Glanaghey added Keadue’s 2nd goal on fifth minutes when he headed home Christy Greene’s cross. Ward then made another good save, this time from Conor Greene. There was little however that the custodian could do when Matthew O’ Donnell fired home from the edge of the box to give Strand a lifeline with twenty minutes remaining. Keadue held on however to defeat their neighbours who were on the wrong side of the scoreline for the first time this season. Best for Strand were: Ryan Greene, Matthew O’ Donnell and Shane O’ Donnell. Best for Keadue were: Hugh Moy, Christy Greene and Gavin Mc Glanaghey. Referee: George Clinton.

Cappry held sway in the first half of this encounter at Moyle View however they failed to register and the sides when in level at the break, each down to ten men. Milford missed two gilt edge chances at the start of the second half before the visitors took the lead through an Aaron Kelly penalty. Paddy Mc Nulty doubled Cappry’s lead on the hour mark Joel Bradley Walsh added a third to assure the visitors took all three points. Best for Milford: Caolan Mc Gettigan. Best for Cappry: Aaron Kelly and Paddy Mc Nulty. Referee: Mick Lagan.

This match was reversed to Park View and Castlefin took full advantage of their familiar surroundings. JP Malley scored a hat-trick within the opening twenty minutes. Ronan Tourish then got in on the scoring act before Malley again found the Drumoghill net. Shane Gallagher scored a second-half consolation goal for the men from “The Moss” but not before Damien Mc Anenny and Gary Mc Nulty added to Celtic’s tally.

These two cancelled each other out in this Premier Division battle. All the usual suspects got in on the action at some stage or another however none of them could fine the telling moment that would have given either one a full set of match points. Lee O’ Brien did have a header cleared off the Kildrum line and Kevin Mc Hugh was a constant threat to the Glenea goal but it ended 0-0 at the Boat Hole.

A scoreless opening half was followed by a clinical home team performance at the Finn Valley Complex. Conor Doherty rolled back the years when he scored a screamer on 55 minutes to get the hosts going. Doherty extended Ballybofey’s lead on 65 minutes when he was set up by Damien Glackin. Glackin added the third himself with ten minutes remaining leaving the Greenbrae men with no way back.

Darren Harvey almost gave Convoy a 4th minute lead but his shot went just over the Bonagee crossbar. Harvey again threatened on 16 minutes but this time he shot wide of the target. The hosts went in one up at the break however as Aiden Mc Laughlin rose highest in a crowded penalty area to head home Eamonn Cannon’s corner-kick. Mc Laughlin turned provider on 58 minutes when he fed Darren Hunter who scored from inside the box. Referee: Frank Duff.