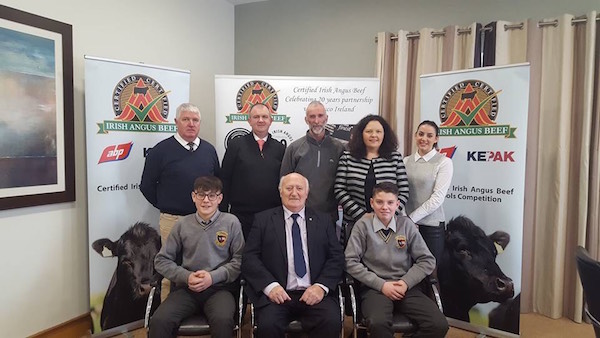 Letterkenny students know where the beef is!

Students Scott Thompson and Daniel McMullan certainly know where the beef is.

The transition year students from Saint Eunans College have made it through to the final stage of the Certified Irish Angus Beef schools competition in Croke Park on the 14th of March 2018.

The Certified Irish Angus Beef schools competition is run by the Irish Angus Producers group along with ABP Ireland and Kepak Group.

The aim of the competition is to encourage second level students to gain an understanding about the care and attention that is required to produce and market the highest quality beef for consumers.

During the final stage of the competition (Stage 3) 5 finalist school’s are selected to win 5 six month old angus cross calves.

The competition then coincides with their Leaving Cert Agricultural Science Project when the finalists rear them through to slaughter and visit processing and retail facilities to understand how the food chain works. Daniel and Scott began their journey back in October of 2017, when they entered the competition by way of a three-minute video.

The video began with an introduction to themselves and the school, they then explained the role of agricultural science in the college and explained their understanding of the three main sponsors of the competition, ABP Ireland, Kepak group and Certified Irish Angus Producers Group.

The boys then talked about their plans for the promotion of the Certified Irish Angus Beef brand if they were successful in the final stage and winning 5 six month old angus cross calves. Scott and Daniel also interviewed two local farmers for their video.

The first being Noel McIntyre, a Pedigree Angus Show breeder. Noel shows cattle all over the country and has won many awards for his cattle so he was very helpful in telling the boys everything about angus show cattle.

The second farmer they interviewed was John Graham who is the owner of Ballyholey farm shop in Raphoe. John keeps angus beef cattle and he was happy to tell the boys everything about rearing angus beef cattle.

Scott and Daniel would like to say a huge thanks to John and Noel for their help throughout the competition. They were delighted to find out that they had made it past the first stage and were booked in for an interview in Mullingar Park Hotel in Co.Westmeath on the 17th of January 2017.

During the first week in February the boys got word that they were successful yet again and were heading for the final stage of the competition in Croke park on the 14th of March 2018.

They are busy preparing their display which they hope will help them win the competition and the ultimate prize of the 5 Angus Cross Calves.