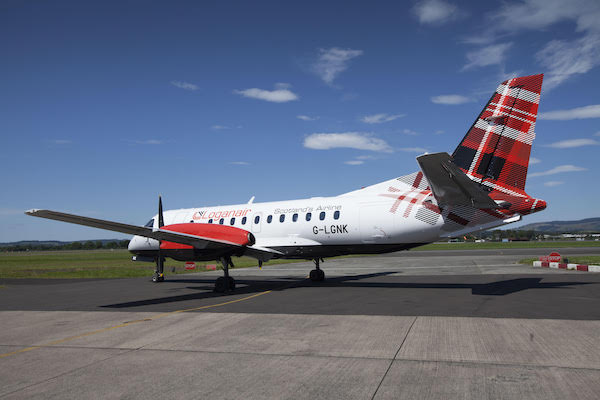 Loganair announces details of its new Donegal to Glasgow service

Loganair, Scotland’s Airline, has announced it is to re-introduce services between Donegal and Glasgow, stepping in to secure the future of the route following the current operator’s decision to withdraw services.

The new flights will take off on Sunday March 25, with three return flights per week all year round on Tuesdays, Thursdays and Sundays.

Loganair has a long history on this route, having flown between Donegal and Glasgow as far back as the early 1990s.

Kay Ryan, Loganair’s Commercial Director, said: “We’re delighted to be returning to Donegal – a region where the airline has a history of service stretching across 30 years.”

“We’re also pleased to able to reassure the local community that there will be complete continuity when the current route provider ceases in March – without any break in service.”

“This is an extremely important link which will help families stay connected, travel between the two destinations on holiday or act as a convenient transport option for football fans heading to Glasgow.”

“It should also be huge boost for the area’s tourism industries and we’re looking forward to building this traffic in partnership with Donegal Airport in the months to come.”

Lead-in prices will start at just £54.99 including a free 20kg checked baggage allowance for every customer – distinctly affordable for customers travelling on holiday, business, or visiting relatives.

Anne Bonner, Donegal Airport’s Managing Director, said: “We are delighted that Loganair are taking over the operation of the Donegal-Glasgow route, following the current carrier’s decision to cease the service from the end of the winter schedule.”

“The Glasgow service is a key part of Donegal airport’s business and the route has been strongly supported over the years, in fact it has become a life-line for many of the Donegal diaspora in Glasgow and other Scottish regions.”

“We in Donegal Airport will be working closely with the Tourism and Business Development Agencies to grow the traffic further and are looking forward to working with the Loganair team to deliver this important service into the future.”

Local T.D. and Leas Cheann Comhairle Pat the Cope Gallagher, who has a long association with Donegal Airport, has welcomed the confirmation by Loganair that they are to provide a service between Donegal and Glasgow commencing on March 25.

He said: “Loganair has in the past provided an excellent service on the Donegal/ Dublin and Donegal/Glasgow Routes.”

“The Glasgow Donegal connection is essential for Donegal due to Tourism and Intra family connections with Scotland. We have seen strong steady performance over the years on the Glasgow/Donegal service and I am confident that this can only improve.”

“Today’s announcement by Loganair is welcome news not just for the Airport but all of Donegal and I wish Loganair every success.”

The new route will also provide onward connections at Glasgow to points within Loganair’s extensive route network in the Highlands and Islands including Stornoway, Islay, Campbeltown, Tiree and Benbecula. This will enable customers to make a single booking from any of these airports to Donegal – saving money and adding convenience to travel arrangements.

Loganair, Scotland’s Airline, serves 28 destinations in the UK together with international services to Dublin and Bergen. The airline operates over 1,000 flights every week with a fleet of 30 aircraft ranging eight to 50 passenger seats. It carries around 800,000 passengers every year on its scheduled service network, which provides lifeline services within the Highlands and Islands and beyond..

Loganair is a codeshare partner of British Airways and bmi Regional. It is a wholly owned subsidiary of Airline Investments Ltd, a UK company which also owns sister airline bmi Regional, operating a fleet of 20 Embraer Regional Jets on routes in the UK and Europe.

Loganair employs 680 staff, the vast majority of whom live and work in Scotland. Its only operating base outside Scotland is at Norwich, where two aircraft and 30 staff are stationed.

Founded in 1962, Loganair operated under a franchise agreement with British Airways between 1994 and 2008 and then with Flybe from 2008 to 2017. From 1 September 2017, Loganair began operating under its own brand name once again, introducing a new reservations system and website and a new distinctly Scottish identity with tartan tails on its aircraft, new uniforms for its aircrew and ground staff

The new schedule from Sunday March 25th , with three return flights per week all year round on Tuesdays, Thursdays and Sundays.