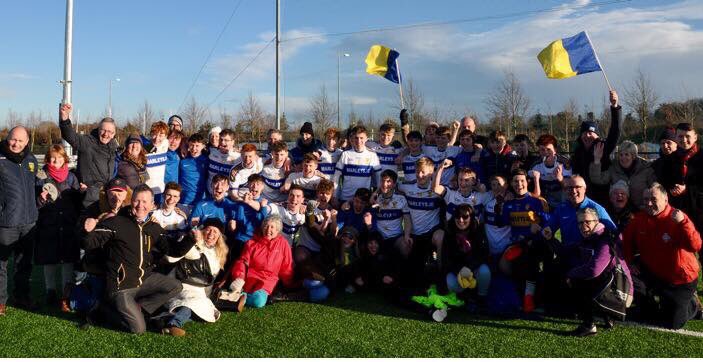 There was yet more late drama yesterday as Coláiste Ailigh overcame Coláiste na Trócaire from Rathkeale to reach the Edmund Ignatius Rice final.

Coláiste Ailigh had hit 2-1 in the late stages of the O’Doherty Cup final and it was the same yesterday as they clawed back a 3-5 to 0-5 deficit with only seven minutes to go.

The Limerick school led narrowly at the break, a goal from impressive centre-forward Eoin Kelly putting them in at 1-3 to 0-4.

Coláiste Ailigh had a strong spell during the third quarter, but could only raise a single point through Rónán Mac Gaoithin.

Then the game seemed to drift away from the Ulster champions when they conceded two further goals to full-forward Ronan Kelly.

However everything changed when Seán Mac an Ultaigh fired in a 53rd minute goal. It lifted his side and Eoin Mac Gaoithin added two more goals to bring the teams to extra time.

The momentum was now firmly with the Donegal side and they grabbed 2-2 during the first half of extra time with Seán Ó Braoin stroking home a penalty after five minutes. Eoin MacGaoithin brought his personal tally to 3-3 with a goal just before the turnover.

Rathkeale upped their game after the break to put Coláiste Ailigh on the defensive, but half-backs Oisín Mac Gairbheith and Dónal Ó Uiginn stood up to the challenge well supported by Conor Mac Meanmain, Diarmuid Ó Cathail and Seán Mac An Ultaigh.

Although they conceded a goal to Eoin Kelly, Rónán Mac Gaoithin tagged on a point and Coláiste Ailigh held out to reach a first ever national final on March 24th.