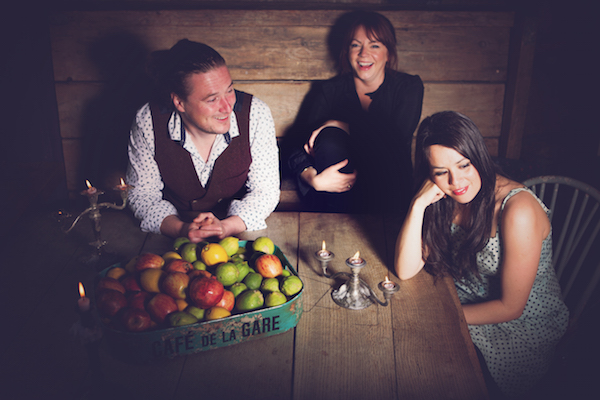 Catch The Whileaways at the Alley Theatre Bar in Strabane

Moving On Music welcomes ‘The Whileaways’ at the Alley Theatre on Thursday 15th March.

The Whileaways world is one of harmonies and beautifully crafted original music.

Using American folksong as a starting point, the three-piece cut their own trail through the undergrowth of roots music.

Since their first release in 2013 they have performed on some of the most prestigious stages and festivals around, wooing audiences and reviewers as they go.

Each member – Noelie McDonnell (vocals, guitar), Nicola Joyce (vocals, ukulele), and Noriana Kennedy (vocals, guitar, banjo) is a force within the Irish circuit. Together their talents create a band bursting with charm and flair. Their sound is true, their performances gloriously engaging.

Their recent highly acclaimed album ‘Saltwater Kisses’ received four stars in The Irish Times and RTE Radio 1 Album of the week. Their sound is true, their performances gloriously engaging.

Prepare to be spellbound by The Whileaways.

This gig will take place in the Alley Theatre Bar. Tickets are £8. Book Here https://www.alley-theatre.com/whats-on/the-whileaways or call 028 71 384444

“Hollers for a chance to be heard in a live setting, so rich is its lyrical tapestry”
Irish Times ****

“I have always loved-almost above all else in music-harmony-and when it is of the standard purveyed by The Whileaways-and the songs are as good as they are, it is irresistible.”
FATEA Records

“The arrangements are simple but brilliant, exactly what it needs to put their voices in true light.”
FolkWorld

Catch The Whileaways at the Alley Theatre Bar in Strabane was last modified: March 8th, 2018 by Stephen Maguire