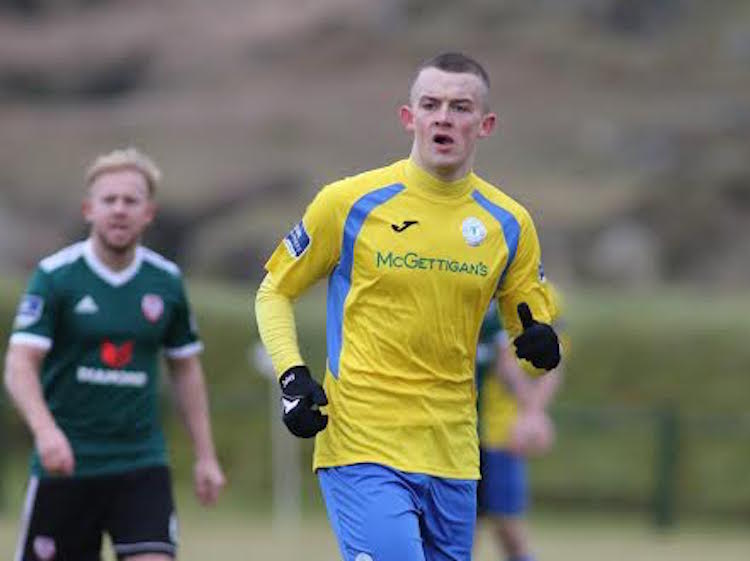 Michael O’Connor is aiming to fire Finn Harps to a quick return back to the Premier Division.

O’Connor dominated League of Ireland headlines for a while in the winter, but the Dubliner has wound up at Finn Park on a loan deal.

Last night, O’Connor netted a debut goal in Harps’ 1-1 draw with Shelbourne and the Shamrock Rovers striker, who is at the Donegal club until July at least, hopes to be a prolific figure in Ballybofey.

“I’m here until July and I’ll try to get as many goals as I can. That’s the plan anyway,” said the 19-year-old.

“We should be up there. It is a drop for me, but I’ll give my best for as long as I’m here. Pre-season went really well and it’s going good so far.”

During the off-season, O’Connor – who last year was linked to Premier League side Burnley – appeared set to make a €70,000 move to Rotherham.

After that move didn’t materialise, O’Connor – whose brother Ciaran is back at Harps after a six-month stint last year – met with Ollie Horgan at a Dublin airport hotel and was eventually persuaded to commit to Harps.

O’Connor said: “It went on for a wee while. There were rumours and speculation – some of it was true and some of it wasn’t – but that’s just football.

“I’m here now and focussed on doing my best for Finn Harps.

“I spoke to my brother. People have doubted this club. It’s a really good club with really good people in it.

“Ciaran wouldn’t have come back if it wasn’t good here. He said it would be good for me. Hopefully the two of us will do well here.”

O’Connor put Harps in front against Shels as he fired home in the 16th minute after Dean Delaney, the Shelbourne goalkeeper, could only parry away a Mark Timlin shot.

O’Connor reflected: “I went inside with the ball. It took a deflection back to me and I was on my toes, ready for it. I just hit it a smack. It’s great to get off the mark here. Hopefully it’s the first of many.”

O’Connor described himself as ‘a bit frustrated’ after the draw; Shelbourne having levelled when David O’Sullivan capitalised on a mistake by Harps ‘keeper Ciaran Gallagher late in the first half.

O’Connor said: “I think we should have won the game. We lost focus for ten minutes, we made a mistake and it cost us.”