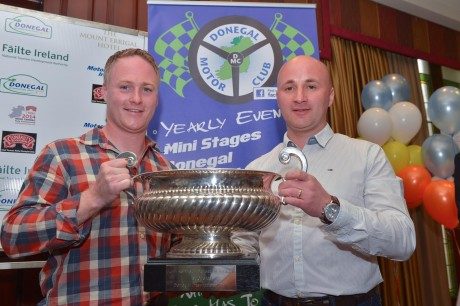 The Lettermacaward man (above, right), who now has O’Reilly calling his notes with Brian Boyle taking some time out of the sport, led from start to finish in the WRC Fiesta.

Boyle and O’Reilly were 37 seconds clear of Josh Moffett and Keith Moriarty by the end with Desi Henry and Liam Moynihan in third.

Boyle, who survived an electrical glitch en-route to the start, punched in the best time on the short opening stage where he was 2.3 seconds ahead of the Ford Focus WRC of Donagh Kelly.

On the 15.14 kilometre Atlantic Drive stage Boyle set another fastest time just as he did on S.S. 3, The Valley. The Donegal driver arrived at the Keel service park with a lead of 16.2 seconds.

On the repeat loop of three stages Boyle managed to extend his lead margin to 21 seconds, the Donegal driver admitted he pushed hard and enjoyed a clean run.

Boyle was quickest through stages seven and eight to move 33.6 seconds ahead of Moffett, Kelly picked up two places on the short seventh stage but on the longest stage of the rally, Atlantic Drive he moved from sixteenth to tenth, his final finishing spot.

Boyle went on to record a fine victory, he also won the Power Stage to claim an extra Triton championship point.

Muff’s Joseph McGonigle and Falcarragh’s Ciaran Geaney were first in class 20 and fourth overall in a BMW Mini WRC.

Donagh Kelly, who had Conor Foley on board the Focus, were down in tenth and second in class 7.

Kelly punctured and dropped away down the order before finishing tenth in general classification.

Stuart Darcy, with Kerry’s Keith McCarthy on the notes, took the win in class 14 in a Darrian, while Aidan Wray and Kieran McGrath won the Group N battle in the Evo 10.

Brian Armstrong and Aodhan Gallagher were the leading crew in class 12, while the Civic of Lee McLoughlin and Emmett Kelly took the spoils in class 11F.

Daniel Conaghan and Terence Magee were 15th overall in the Escort and second in class 13.