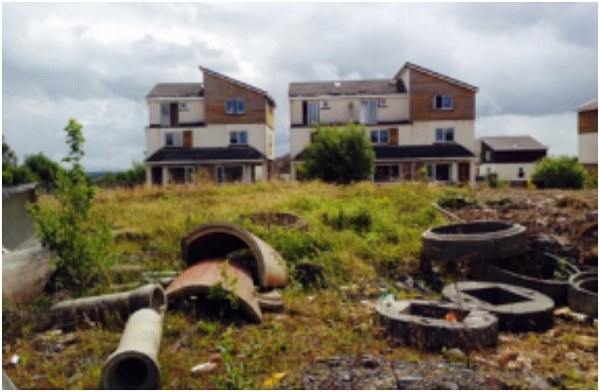 Despite a significant reduction in the number of unfinished estates across Ireland, ghost estates continue to haunt the country.

The ‘2017 Annual Progress Report on Actions to Address Unfinished Housing Developments’ finds that at the end of 2017, there were 256 ‘unfinished’ developments nationally – a 91% reduction from the 3,000 ghost estates identified in 2010.

Across the country, 1,084 units are lying vacant. 678 of these are dwellings that are complete.

Donegal currently has 21 unfinished estates dotted across the county.

3 of Donegal’s unfinished estates are undergoing works, being described as “active” in the report.

“For the year ahead, a number of larger local authorities with a more significant remaining cohort of unfinished developments like Cork, Roscommon, Donegal, Kerry and Tipperary will be working with the Department to increase the numbers of resolved developments and reduce their numbers,” Deputy English explains.

“It has been noted over the last number of years by the Department’s staff that the large majority of an estate may be satisfactorily complete and well established. However, an ‘unfinished’ element including building shells may be located to the rear and/or side of the development. In all circumstances these ‘unfinished’ elements are fenced off and are screened from the rest of the ‘completed’ estate.”

15% of those who occupy unfinished estates say that they are impacted by the “unfinished element”, for example, households that directly overlook building shells.

The report outlines that local authorities are continuing to identify and acquire dwellings throughout their areas “to build up their stock of public housing” in both occupied and unoccupied unfinished estates.

Local authorities consider a number of things before aquiring dwellings, such as the dwelling’s proximity to schools, access to infrastructural services such as water and wastewater, and cost of completion.

They also take into consideration existing social housing within locality and “whether further social housing would be appropriate or lead to an over-concentration and poor tenure mix.”

With regard to NAMA’s contribution to social housing, the report outlines that demand has been confirmed by local authorities for 2,793 properties that NAMA had previously indicated as being potentially suitable for social housing purposes.

At the end of the third quarter of 2017, 2,216 homes were fully completed and “handed over” for use through the scheme.

Damien English TD, Minister for Housing and Urban Development comments: “The ‘ghost’ estates of the past are largely gone, but should not be forgotten as regards the lessons to be learned in running ahead of ourselves in the pattern of development approved and the management and enforcement of the development process and conditions attaching to planning permissions.”