WATCH: Static Movement stir up excitement on Ireland’s Got Talent

Two well-known Letterkenny dancers put on an electrifying performance to impress on Ireland’s Got Talent in last week’s show.

Static Movement, formed by Eric Roberts (27) and Vinny Mc Laughlin (26), showcased their mesmerising robotic routine in their audition for the TV3 talent show.

The self-taught duo have achieved fame for their dancing before, having received rave reviews on Sky’s Got to Dance contest.

This time around, their performance on Ireland’s Got Talent stirred some debate with the judging panel.

“I just felt like your dancing was a bit more slick,” Denise told Eric.

Comedian Jason Byrne liked their moves, and was eager to see them undergo a costume change and ‘bring back the tights’.

Static Movement were voted through by 3-1, with a big yes from Michelle Visage who liked their look.

Denise was the only judge to vote ‘no’, but when the judges put it to the audience, it was a resounding ‘Yes’.

Speaking to Donegal Daily this week, Eric said the fast-paced editing of the show omitted some of their routine and more comments from the judges.

“Louie and Michelle both said we were the best dance act they had seen,” he said.

The next step for Static Movement will be the semi-finals, and the dancers are looking forward to the challenge.

Eric said: “The standard has been high but we feel we had something a bit different, and the support has been amazing.”

“We never stop rehearsing and always have something up our sleeve.”

Static Movement are always on the move, performing at weddings, parties and events around Donegal. Fans of the dancers will be eagerly awaiting the next round of Ireland’s Got Talent to see what high-tech moves they’ll come up with next. 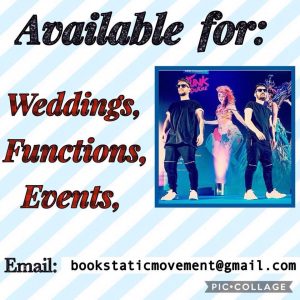 Other Donegal acts through on the first series of IGT are Carndonagh dancer and contortionist Lia Della-Friel and Ardara singer and drag artist Martin McGuinness.