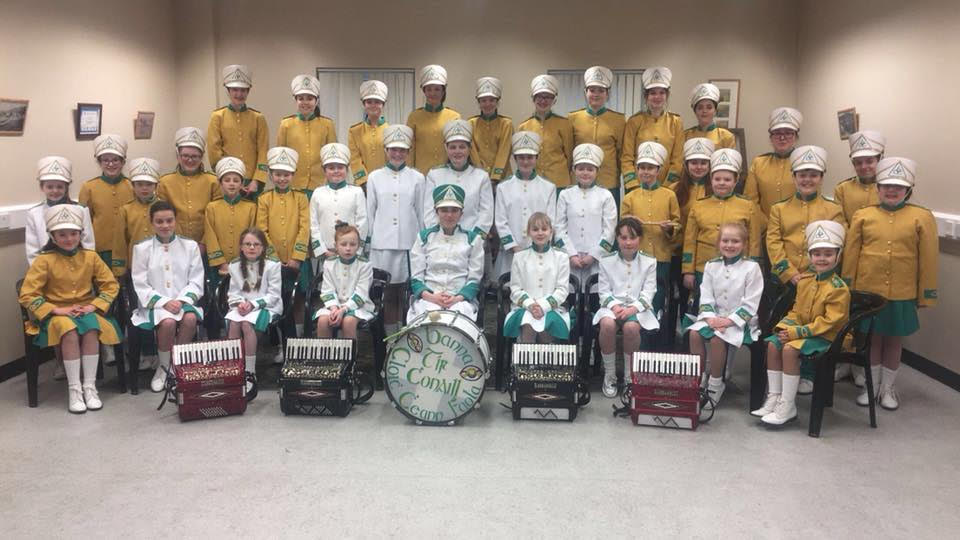 Banna Ceoil Chloich Cheann Fhaola is making the journey across the water this weekend to take part in the St.Patrick’s Day parade in Liverpool.

This invitation to march in the St. Patrick’s Day parade came from the Liverpool parade director and was accepted by the band committee following the bands success in retaining their All-Ireland Fleadh Junior Miscellaneous Title for three years in a row.

Chairperson of the band, Grace McGarvey explains: ’We really have the best bunch of young people and they are a credit to our parish. The commitment each member have given to the band in recent years after winning the All-Ireland title for three years was incredible. We decided to accept the invitation to reward the children for all their effort and dedication. We, the committee, teachers and parents are so proud of them all and I know they will represent our parish with pride this weekend’.

The band’s previous trips abroad to Munich in 2000 and Philadelphia in 2009 for St.Patrick’s day parades have given lifelong memories to previous band members.

Christopher Barrett, a past member of the Cloughaneely Band, currently teaches the drums and percussion to its members.

He said ‘Whenever I meet up with friends that were in the band that travelled to Philadephia, we still share funny stories and memories of that trip. It was an amazing experience to represent your parish, county and country and I know our current band members will do their best and they deserve so much credit for all the hard work they put in’.

Since October, band members have been practising every week and have prepared a new music and marching routine for the St. Patricks Day trip.

This includes a mixture of their Fleadh winning programme with newer popular show tunes and traditional favourites such as ‘Leaving of Liverpool’ and ‘The Irish Rover’.

The band will be putting the finishing touches to this routine at their last practice in Gortahork Hall on Thursday evening. Later that night, they depart for Dublin and travel by boat to Liverpool in the early hours of the morning.

The band have also been asked to play at a concert, to entertain an audience of the Irish Diaspora, in the Irish Centre on Friday evening before they take part in the main event, the St.Patrick’s Day parade on Saturday afternoon.

In all, 40 band members will march in the parade and this marks a wonderful occasion for band members young and old. We wish them the very best of luck and as a community, we thank them for bringing great success and joy to the parish of Cloughaneely down through the years.