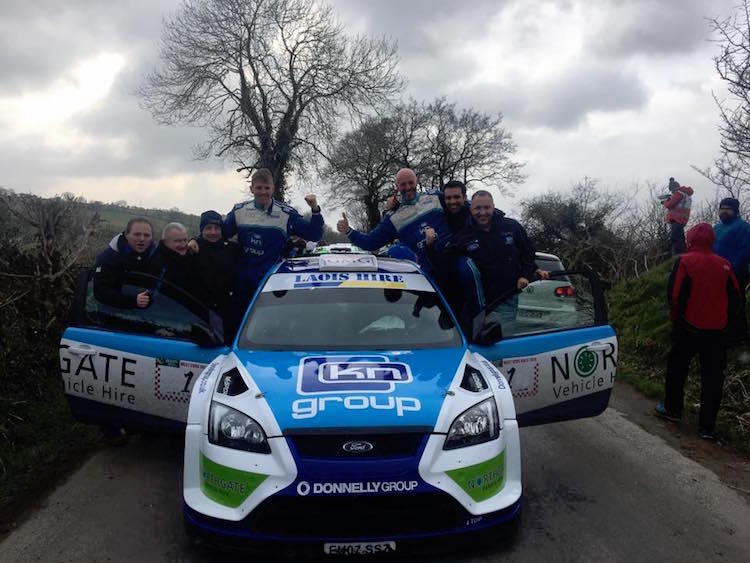 Donagh Kelly completed a historic fifth win in a row at the West Cork Rally today.

The Frosses man, with Conor Foley on the notes in the WRC Focus, was in town to defend his title – and he did it with a flawless display at the wheel.

Kelly hardly put a turn wrong all weekend over the 14 stages.

Kelly had one minute and 45.8 seconds to spare on Josh Moffatt and Andy Hayes, who were second with Sam Moffatt and Karl Atkinson in third.

Kelly was a full 18 seconds faster than Declan Boyle – who was competing in West Cork for the first time – on the opening stage and it set the tone for a comfortable win by Kelly.

By the end of the third stage, Kelly had stretched his lead out to almost a minute, scorching way into the distance at the close of day one.

“We worked out that the first four stages made up a third of the rally mileage,” Kelly said.

Kelly picked up the pace again this morning and set the fastest time on the opening stage, but the pace slackened as the Donegal man had the chequered flag in sight from a long way out.

He said: “We really went for it there and got a good lead. The hardest part was driving within ourselves through the last day and a half, managing our pace.”

Boyle again had trouble in the Fiesta over much of the weekend and it was a frustrating couple of days for the Lettermacaward man.

Eugene Donnelly, driving the new Divers Hyundai-backed i20 R5, came home in ninth overall, while rising young county Derry driver Callum Devine was 11th overall, and the winner of class 2, in the Fiesta.

Kevin Eves from Pettigo, who had a superb year in 2017 in the Corolla, started where he left off. Eves, with Chris Melly on the notes, was third overall in the national event, which was won by Gary Kieran.

Dungloe’s John Bonner, with Emmet Sherry, won class 14 and was fifth overall in the national.

Damien Tourish and Domhnall McAlaney were third in class 14 and eighth in the national while Letterkenny man Johnny Baird was on the notes for Wesley Patterson, who finished 12th overall in the national rally.