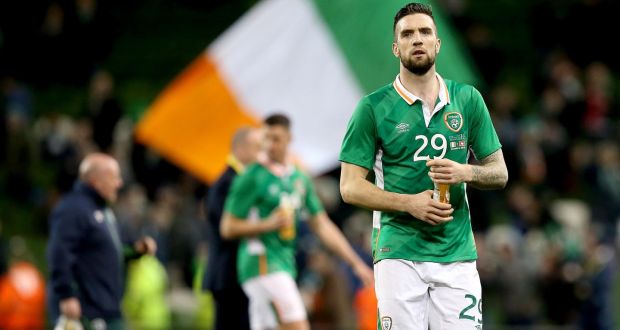 Shane Duffy was last night named as Senior International Player of the Year at the 28th ‘Three’ FAI international Awards.

Duffy, who had been nominated for the Senior and Young International Player of the Year awards, scooped the big prize on the back of a stand-out 2018 FIFA World Cup qualifying campaign.

Derryman Duffy, who plays for Brighton in the Premier League, is the son of Donegal parents.

His father, Brian, is a native of Ard O’Donnell in Letterkenny and his mother, Siobhan, hails from Raphoe originally. The family have strong connections to both towns.

Amy Boyle-Carr, Shane Blaney and Jimmy Bradley were short-listed for awards, but missed out in their respective categories.

The Senior Women’s International award went to Harriet Scott – who quickly established herself in Colin Bell’s side – ahead of nominees Megan Campbell and Denise O’Sullivan.

A special tribute was reserved for Ireland centurion Damien Duff as he was inducted into the Hall of Fame following a fantastic career that saw the former underage star become a fan’s favourite at senior level.

Former Ireland assistant manager and World Cup winner Marco Tardelli was named as the International Personality, while the recipient of the Special Merit Award was the late Jimmy Magee.