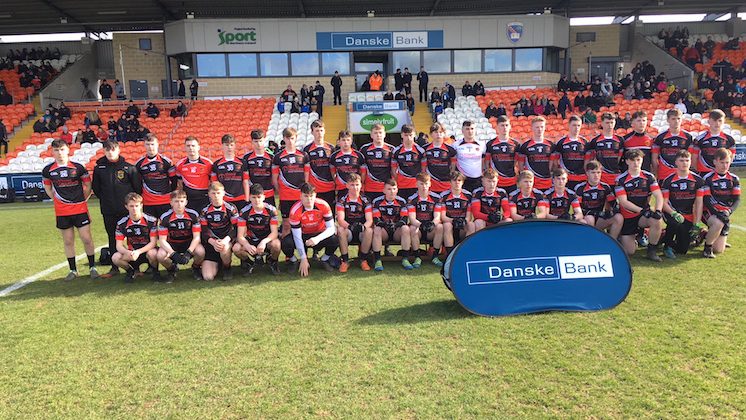 St Eunan’s College will agonise on how they haven’t managed to bring the MacLarnon Cup back to Sentry Hill for the seventh time.

By Chris McNulty at the Athletic Grounds

Somehow, St Eunan’s let a chance slip and yet they will still be some way relieved to have another chance to roll the dice after they crumbled in the second half.

Leading by two points after a dominant first half, St Eunan’s looked to have paved the path to victory when Conor O’Donnell netted their second goal – but the Letterkenny side scored just once in the final 25 minutes.

In the meantime, Holy Trinity marched right back into contention and it was a contest that was balanced upon the knife’s edge right to the finish.

There, St Eunan’s had a glorious chance to snatch the prize.

Conor O’Donnell, whose late free was cancelled out by Holy Trinity sub Connor Quinn, raced through on goal. A fisted point seemed the best course, but the corner forward went for goal. His powerful shot was well beaten by Conor Loane, the Holy Trinity net minder and they have to do it all over again.

St Eunan’s led 1-4 to 1-2 at half-time with Brian Diver’s early goal helping keep them in front, but they could have been out of sight at the short whistle.

Holy Trinity stayed in touch and St Eunan’s got the second goal they craved.

A fortunate refereeing call that gave them a free ended when Conor O’Donnell delightfully nipped in and slotted past Loane.

That put St Eunan’s five up and seemingly on their way – but Holy Trinity rolled the sleeves up and launched a stirring comeback that yielded four points in a seven-minute spell, through Eoin Gallagher, Pauric Lagan, Mark Devlin and Mark McKearney.

When Tiernan Mackle slammed over from the left-hand side on 47 minutes, Holy Trinity were level for the first time since the seventh minute.

Holy Trinity had chances to get their noses in front for the first time in the game as the chequered flag came into view, but St Eunan’s ended a near-20 minute barren spell when Conor O’Donnell tapped over a free.

Holy Trinity could feel aggrieved when Connor Quinn was denied a free in a posse of bodies in the final minute of normal time and a frenetic closing chapter was only over when O’Donnell dropped a ’45 short.

St Eunan’s had a dream start with a goal after just four minutes. Shane O’Donnell’s attempt for a point careered off an upright, but Diver was on red alert and the Letterkenny Gaels man tucked into the net.

It was a vintage piece of poaching from Diver, but Eunan’s were rocked back on their heels as Holy Trinity hit back for an immediate response.

St Eunan’s shook the heads clear and Shane O’Donnell curled over a delightful score to restore the advantage.

McDevitt stroked over another free after a superb piece of play and persistence from Oisin Purdy created the chance.

A wonderful fetch in the middle of the park by Shane McDaid opened the possibilities for Eunan’s and when Conor O’Donnell pointed it was beginning to look as if the silversmith could start etching the Letterkenny school’s name once more.

For all their play, however, St Eunan’s were only two in front as Quinn and Oran Mulgrew reduced the arrears for Holy Trinity who, somewhat remarkable, were closer than they ought to have been at the short white.

St Eunan’s navigated a tough Donegal derby with Colaiste Inis Eoghain in Owenbeg to make it back to the final as goals from Pádraig McGettigan and Purdy sealed a 2-12 to 2-10 win over their county foes.

Purdy bagged the goal in a 1-16 to 1-4 quarter-final win over Loreto, College Coleraine in late January as Eunan’s began to dream.

Holy Trinity had a much easier passage, hitting five goals in a 5-7 to 0-7 rout of Our Lady and St Patrick’s College, Knock, in their semi-final, while they had a five-point win over St Patrick’s, Downpatrick in the last eight.

Quinn, Holy Trinity’s best player, kept his men in touch, but when Conor O’Donnell nipped in for the second St Eunan’s goal, it should have been curtains.

It wasn’t, though, and they’ll take to the stage again, with Celtic Park mooted as a possible venue for part two.