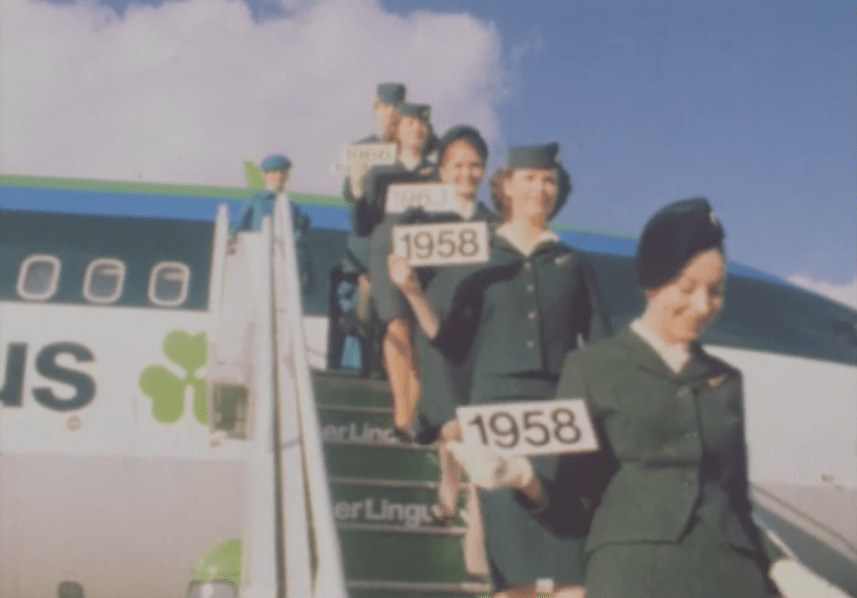 Style: A look back on 70 years of high-flying fashion onboard Aer Lingus

Aer Lingus has announced that after 20 years, their air hostesses will be kitted out in brand new threads.

From Magee of Donegal tweed to Jackie Kennedy-style accessories, the iconic uniform has had quite the journey since the airline’s first air hostesses took to the skies in 1945.

The newly designed uniform by Louise Kennedy will be revealed in spring 2019 and will be worn by all frontline ground agents and cabin crew.

The famous ‘teal green’ uniform that is currently in effect was also designed by Louise Kennedy and makes history in that it has been the longest-running Aer Lingus uniform – first taking to the ‘runway’ in 1998. 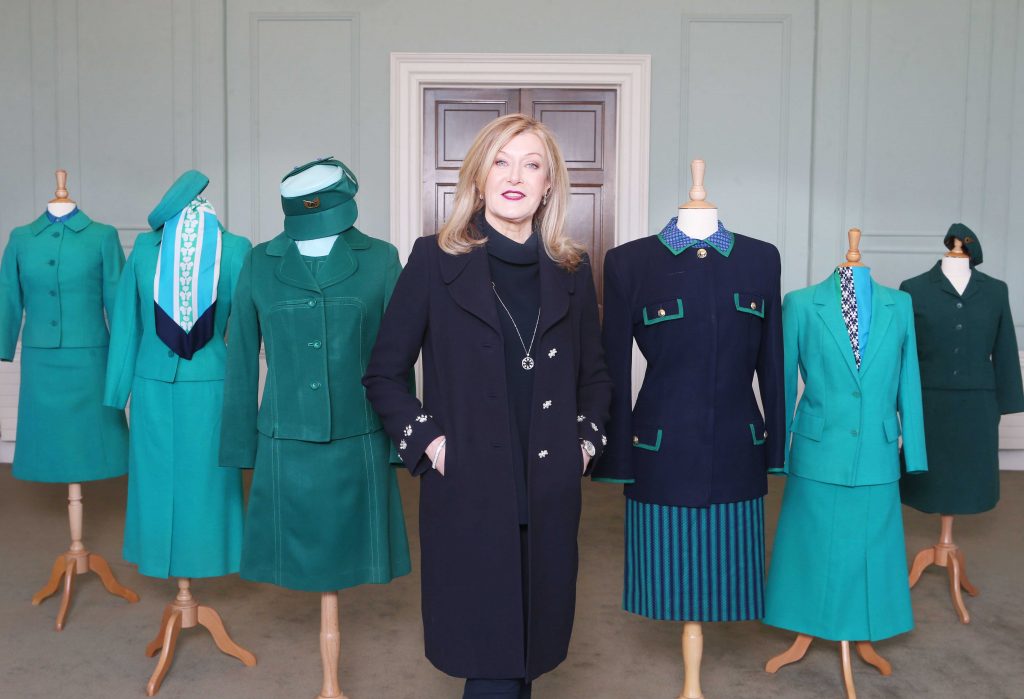 Designed by Sybil Connolly of Pimms in 1945, Aer Lingus’ first-ever uniform was a military-style rich brown suit which then became green a few years later in 1948.

From this time green, together in its many variations, has remained a primary colour in the Aer Lingus uniform, making it instantly recognisable not just in Ireland but across the globe.

Here’s a look back on the in-flight fashion over the years:

1945: The airline’s first cabin crew, or air hostesses as they were known in 1945, were dressed by acclaimed designer Sybil Connolly of Pimms, in a military-style rich brown suit, a calf-length skirt, long blazer and hat. 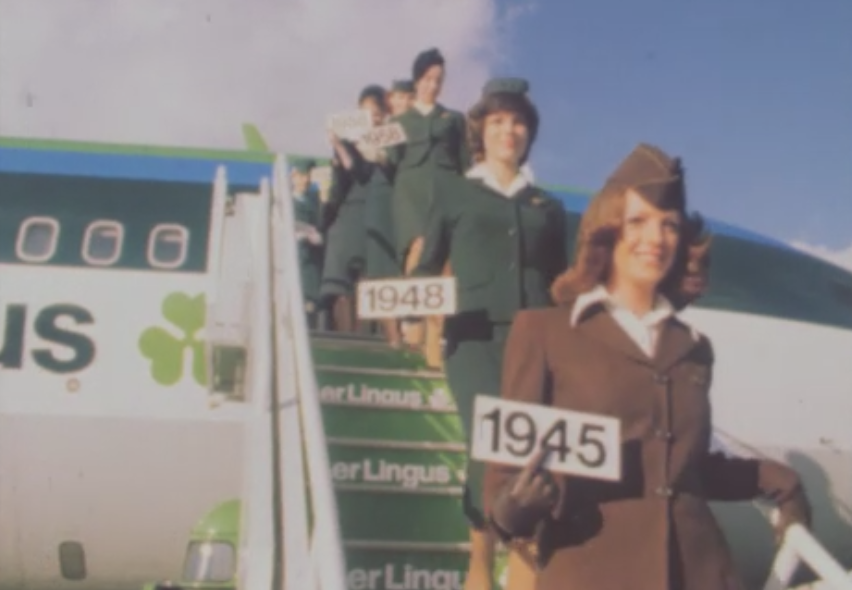 The uniforms throughout the years presented in RTÉ’s 1975 report. Source: RTÉ Archives

1948: The first green uniforms were introduced, with a two-piece green tweed suit, a skirt and jacket, with a cream blouse. 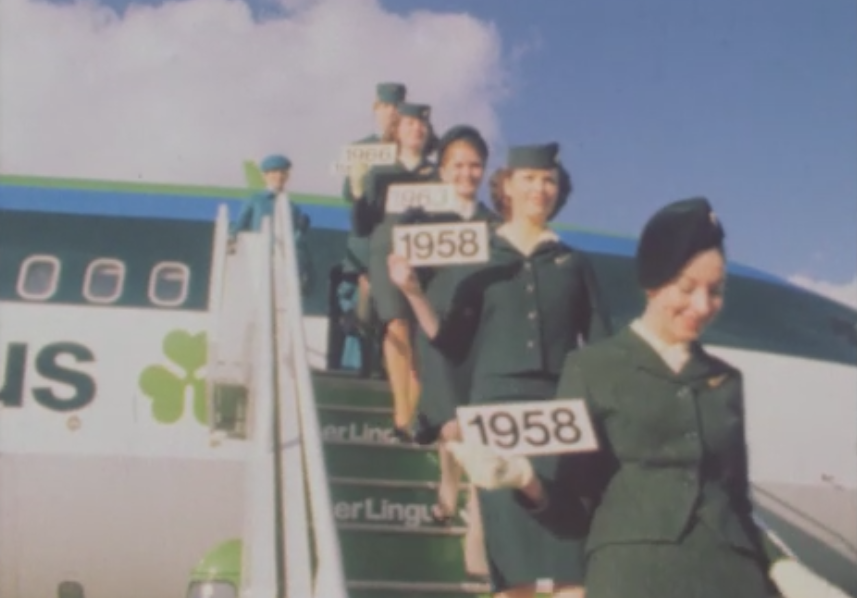 1963: The 1963 uniform was designed by Neillí Mulcahy, one of Ireland’s leading fashion designers in the 1950s and 1960s. The design featured a three-piece navy blue and green check uniform, made from Magee Donegal tweed. This uniform also introduced the first Aer Lingus handbag, which was navy and matched the gloves.

1966: The 1966 uniform was again designed by Irene Gilbert and saw the return to a green suit with and lemon blouse, this time featuring the mini-skirt style of the time, and a Jackie Kennedy-style pillbox hat, worn with navy gloves.

1970: In 1970, the uniform was re-drawn again, with a green pinafore dress and peaked cap by Digby Morton.

The new uniform featured a tailored blazer suit in peacock green-blue tweed from Magee of Donegal, paired with a pleated skirt.

1989-1990: Paul Costello designed two uniforms in a summer and winter version, which were introduced in 1989 and 1990 respectively, which paired a straight navy jacket with a green and blue striped skirt.

1998: 1998 saw the latest change of uniform, to the current design by Louise Kennedy. 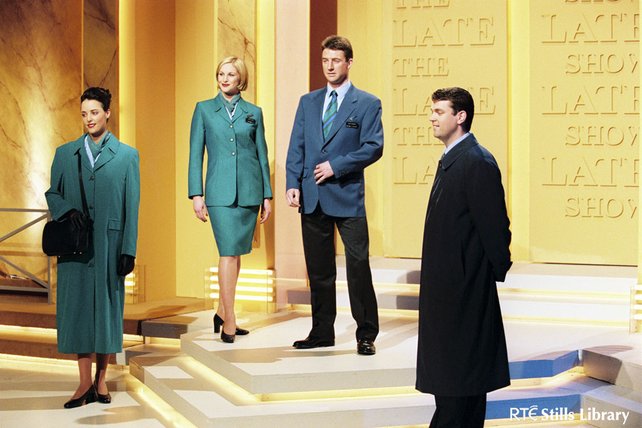 The new uniforms modeled on the Late Late Show in 1998. Source: RTÉ Archives

Speaking at the announcement, renowned Irish fashion designer Louise Kennedy said: “20 years after we first designed the current and longest-standing uniform, I am thrilled to continue the design story of the celebrated Aer Lingus uniform.

“To be able to now design a brand new uniform for the airline is an opportunity we very much appreciate and relish. In fact, it is an absolute honour”.

Mike Rutter, Chief Operating Officer marked the announcement added: “The redesign of the Aer Lingus uniform will make ripples not just within our own airline but throughout Ireland and far beyond.

“The Aer Lingus uniform is the very fabric of our brand and together with the shamrock on the tailfins instantly depicts our rich history and gives our guests who fly with us a warm sense of Ireland and Irish hospitality.

“The Aer Lingus brand has evolved greatly in the last three years which is evident in the ‘Smart Flies’ brand positioning and in the modernisation of the guest experience online, at the airport and on board.

“This new uniform design will represent the airline we are today, flying direct to 13 North American destinations, to more than 70 European destinations and carrying over 12 million guests each year.” 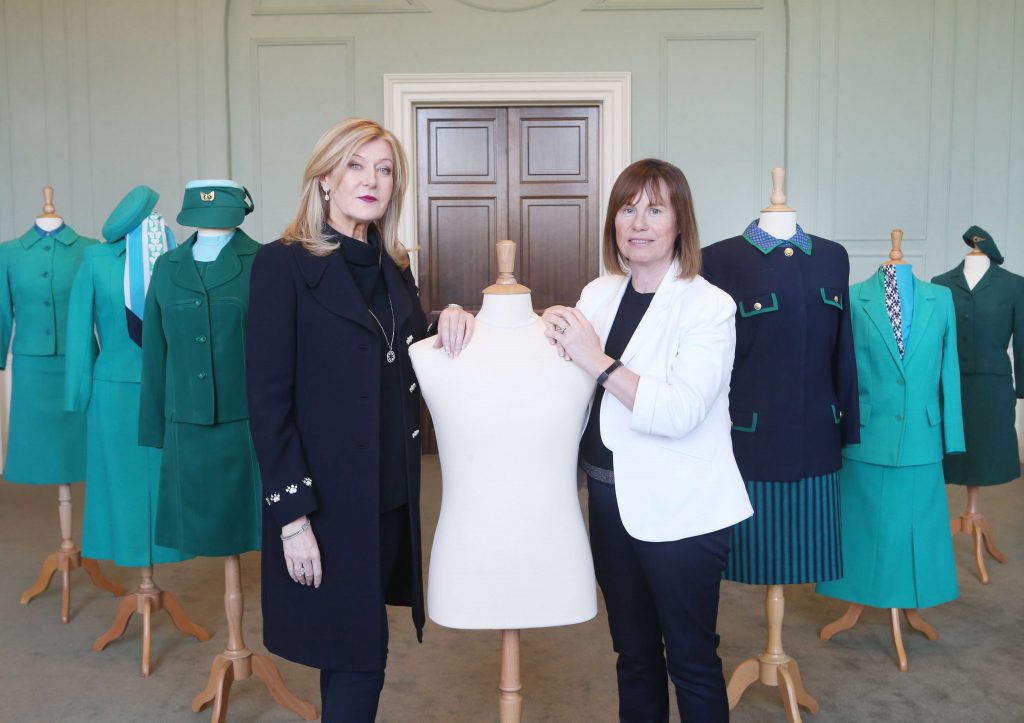 Aer Lingus carried out extensive feedback with staff across many departments within the airline to get their views on the current uniform and to discuss what the new uniform should address in terms of frontline ground agents and cabin crews’ needs in today’s working environment.

The key objective of the redesign is to create a contemporary uniform that will retain its modern look over time and will best meet the needs of today’s airline staff, a spokesperson says.

The scope of the project covers a complete redesign of all uniform pieces for frontline ground agents and cabin crew. It also will include selecting fabrics for each garment and working with the manufacturing partners to develop the final design and materials.