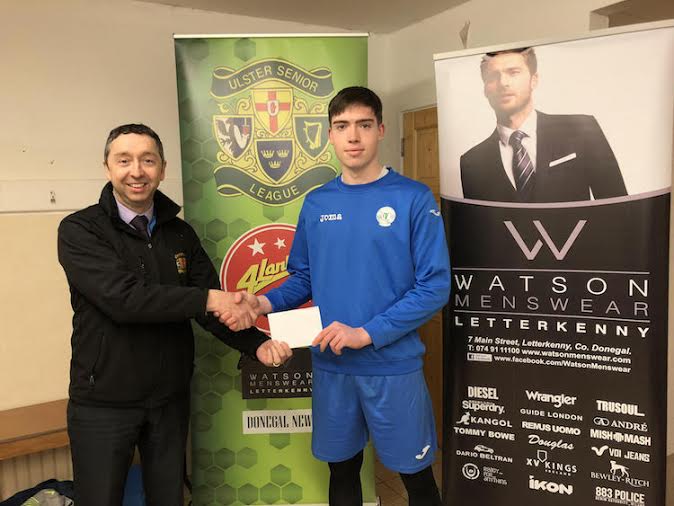 USL – Horgan vows to give youth a chance after Duffy breakthrough

The Finn Harps senior manager Ollie Horgan says he will be keeping an eye on the club’s youngsters in the coming weeks – and will give them a go if the chance arises.

Harps Reserves moved into joint third in the Four Lanterns Ulster Senior League on Tuesday night with a 2-0 win over Derry City at the New Camp Complex in Killygordon.

Jamie Browne and Niall McGinley bagged the goals for Joe Boyle’s team as they continued their encouraging sequence of form since the turn of the calendar.

Young striker Adam Duffy made his senior team debut as a substitute in Saturday night’s 2-0 win over Cobh Ramblers at St Colman’s Park.

Duffy had been the Watson Menswear USL Player of the Month for January/February (Pictured above) after some impressive displays.

“I watched Adam in a number of the USL games and he did well,” Horgan said.

“Adam has been in training with us too and has done well. A few of the Under-19s were maybe ahead of him, but didn’t get to his level.

“Adam merited getting on the pitch on Saturday below in Cobh. He caught up and overtook some of the lads – so it’s up to them now to go and catch him.”

Young goalkeeper Jamie Bell was among the replacements and Gareth Doherty was in the squad for the EA Sports Cup clash with Mayo League.

Horgan said: “A lot of the young lads played serious minutes last year. We need them to get back to that level and catch up with the likes of Adam now. We have a number of bodies down and the chance will crop up for the young lads.

“That’s the way we’d like to be going with lads coming in and forcing their way in.”

Harps host reigning USL Champions Cockhill Celtic on Sunday for a game against a side that has dominated the local intermediate landscape of late.

Cockhill themselves were in EA Sports Cup action on Monday, when they went down narrowly to Galway United at Eamonn Deacy Park, as Gerry Gill’s unfortunate own goal proved to be the only goal of the game.

“Our shape was good and there was nothing in the game,” ventured the Cockhill manager, Gavin Cullen, afterwards.

“To be caught with a sucker punch was annoying. They weren’t hurting us until that point.

“We didn’t create too much ourselves, but we were solid and our unit was good. We’ve been in the EA Sports Cup and we’re in the game every year. We just didn’t have enough in the tank.”

An updated fixture list for games between now and the end of the season is available on the Ulster Senior League website, www.uslfootball.com

Clubs will be aware that the weather played havoc with games and the League would like to acknowledge the assistances of those clubs and managers who co-operated in the re-fixing of matches.

The executive committee of the Four Lanterns Ulster Senior League, on behalf of all of our clubs and members, would like to convey good luck to Letterkenny Rovers ahead of their FAI New Balance Intermediate Cup semi-final against Firhouse Clover on Sunday at Leckview Park.

Rovers were finalists in the competition two seasons ago and now stand 90 minutes away from a return to the Aviva Stadium.

USL – Horgan vows to give youth a chance after Duffy breakthrough was last modified: March 21st, 2018 by Chris McNulty