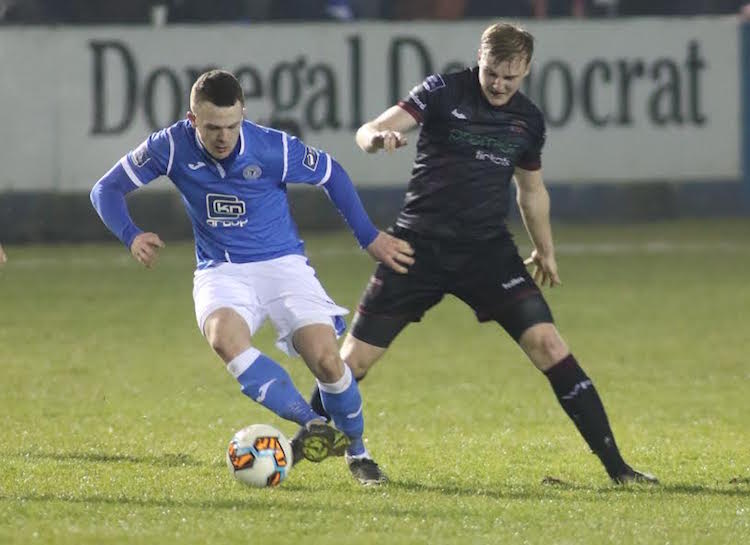 Michael O’Connor’s third goal of the season fired Finn Harps to a narrow win over ten-man Wexford at Finn Park.

The O’Connor brothers, Michael and Ciaran, combined in the 68th minute to fire Harps to a second win in a row.

The Dundalk siblings had hit the headlines earlier in the week for off-field misdemeanour, but they connected superbly here to give Harps the win.

Wexford played 42 minutes of the second half a man down after Owen McCormack’s sending off, but it was a night when the Harps attack failed to sparkle.

It was uninspiring and it felt like a drain for long periods, but another win – and clean sheet – is the important currency as Ollie Horgan’s men prepare for a joust with Drogheda on Monday night.

The only goal of the game arrived when Ciaran O’Connor crossed from the left and younger brother Michael showed his prowess with a wonderful finish into the bottom corner.

After netting on the season’s opening night draw with Shelbourne and the EA Sports Cup win over Mayo League, it’s three goals in four games for the on-loan Shamrock Rovers striker.

Three minutes into the second half, Wexford were reduced to ten men. As Harps frontman Ciaran O’Connor stooped to pick up the ball, which had just gone out of play, to take a throw-in, Wexford defender McCormack lashed out at ball and O’Connor, leaving referee David Dunne with little option but to brandish the red card.

The first half had been rather lifeless.

Harps had two timid claims for penalties waved away, the first seeing Jesse Devers going to ground at the Town End under a challenge and, later in the half, the ball appeared to strike the hand of a Wexford defender, though it was perhaps a case of ball-to-hand.

Mayo native Devers was included for his first League start in Harps colours. The close-season arrival from Manulla took the place of Paddy McCourt, who is sidelined due to a calf injury picked up in last week’s 2-0 win at Cobh Ramblers.

Wexford had been walloped 8-1 by Drogheda United seven nights ago at United Park and Damien Locke arrived in Ballybofey with the purpose of avoiding a repeat.

Harps rarely threatened Kealan Gaffney’s goal in the opening period, despite having the lion’s share of the play.

Tommy McBride riffled over the top after one decent incision but, by and large, it was a frustrating first 45 minutes for those of a blue and white persuasion.

After the re-start, Mark Timin’s daisy-cutter was held by Gaffney and the Wexford goalkeeper did well to hold onto a testing low effort from Mark Coyle.

On the hour, Harps captain Ciaran Coll managed to find himself in position, but failed to test the visiting ‘keeper.

At the other end, it was a stress-free night for Ciaran Gallagher, the Harps number 1. At this week’s pre-match press briefing, Horgan and vice-captain Keith Cowan both alluded to they importance of the shut-outs. It was needed here with Harps only able to prise Wexford open once, when Michael O’Connor’s instincts proved the difference.

O’Connor had a late attempt at doubling the lead, but stung the palms of Gaffney three minutes into added-on time.