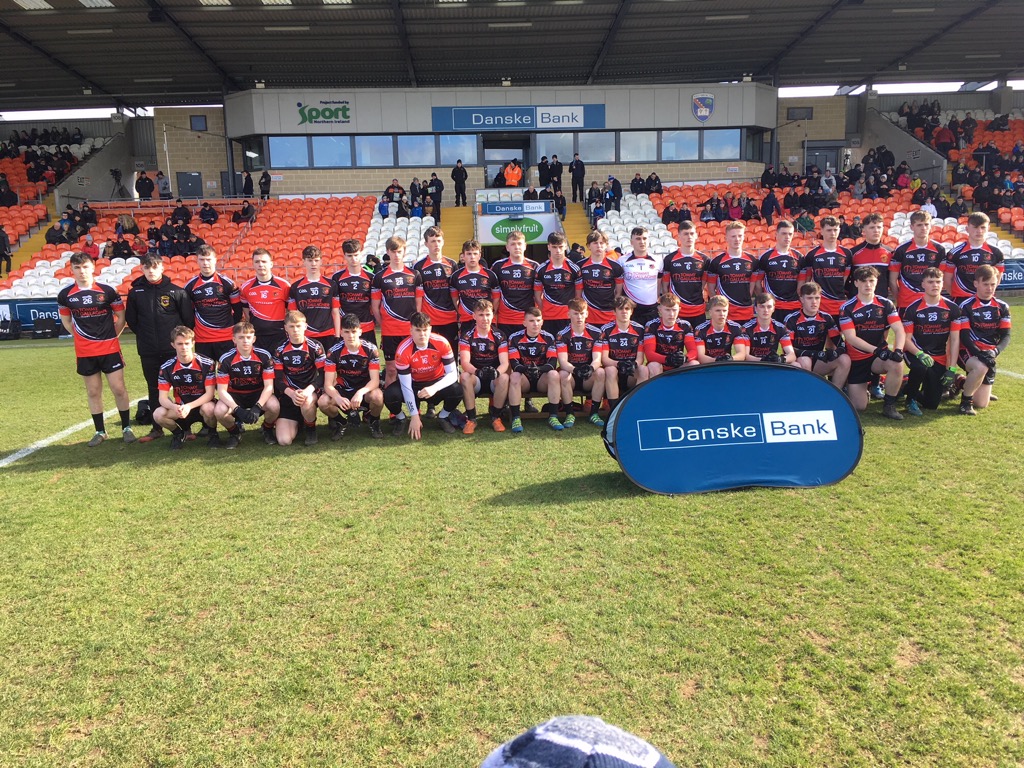 It was heartbreak for St.Eunans College, Letterkenny as a point by Holy Trinity College, Cookstown in the final minute of extra-time gave the Tyrone lads victory in this epic final replay at Celtic Park.

The sides were level at the break and after the lead had changed hands a few times in the second-half it also finished level again at full-time. St.Eunans led late in extra-time but points by Tiernan Mackle and Oran Mulgrew won it for Holy Trinity.
Man of the Match Shane O Donnell who kicked a magnificent nine points opened the scoring for Eunans after a minute with a fine solo effort.
Holy Trinity hit back with two points in the seventh minute, a Tiarnan Quinn free and Eoin Gallagher from play.

A minute later the Tyrone lads hit the net,  Mark Kearney created the chance with a accurate pass into Tiernan Mackle who hammered the ball past Eoin O Boyle to make it 1-02 to 0-01.

Eunans hit back immediately with another Shane 0 Donnell point.  A minute later Holy Trinity opened up the Eunans defence and Pauric Lagan set up Mackle for what looked a certain goal only for Eoin O Boyle to deny him with a brillant save.

By Charlie Collins at Celtic Park

It was eight minutes before another score, with the Letterkenny lads showing great patiences in the build up before Cormac Finn kicked a fine point from 25 mts to leave two points in it.

In the 21th minute Tiarnan Quinn’s point left a goal in it  but Shane O Donnell’s third point and a fine effort from midfielder Shane Doherty left a point in it.
They were level in the 27th minute when that man Shane O Donnell burst through to kick a super score off his left foot.  Holt Trinity had a couple of chances before the break but failed to take them and as they were at the finish last Monday the teams went in level at the break, Holy Trinity 1-03 /St. Eunans 0-06.
The Donegal lads had a big let off in the first minute of the second-half when half-time sub Aaron Moore got through but his shot crashed back off the post.

They regained the lead a minute later with a fine Mark Devlin point but Conor O Donnell replied with an excellent 45 to leave it level at 1-04 to 0-07.

Conor O Donnell’s free put Eunans ahead but two minutes later Trinity’s Tarlach Quinn was fouled in the big square and Tiarnan Quinn hammered home the penalty to make it 2-05 to 0-09. Shane O Donnell got his sixth point to leave two in it.
Eunans Conor O Donnell and Trinity’s Tiarnan McNamee received red cards for an off the ball incident in the 56th minute.

The drama didn’t end there as with extra-time beckoning Holy Trinity were awarded a free 30mts out in front of goal but Mark Devlin kicked it wide and into extra-time we went.
The start of extra time saw a long delay as St.Eunans Ryan Diver pick up an injury in the first seconds which held up play for five minutes.

We had only one score in the first-half and it was yet another Shane O Donnell classic, turning away from several defenders and steering a beauty over the black spot to leave it 0-13 to 2-06 to the Letterkenny lads, his ninth point of the game.

Tiernan  Mackle pointed in the second minute of the second period to draw Holy Trinity level yet  again.  Shane O Donnell had chances from play and a free but was wide and short with his efforts.