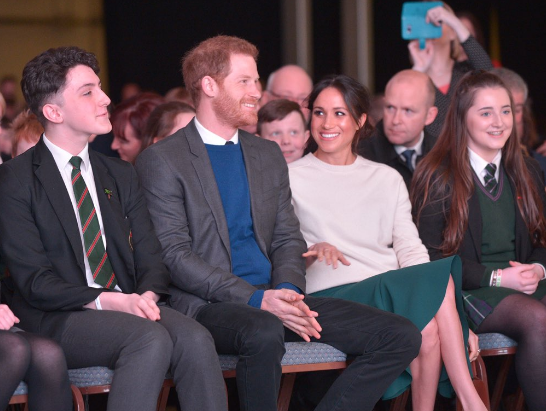 The royals, due to be wed on May 19th, made their first official visit to Northern Ireland together today.

The young singer performed as part of Amazing the Space, one of Northern Ireland’s largest peace-focused events – and it was certainly an event fit for royalty!

Taking to the stage at the Eikon Centre, David James soon had the crowd singing along and clapping before being met with huge cheers after each song.

Sharing the news on Facebook, David says: “I had the most amazing morning performing for Prince Harry and Meghan Markle as well as 3,000 school children at The Eikon Centre Lisburn!

“I was amazed to see them singing along to Shut Up and Dance!”

The event, run by Co-operation Ireland, is a particularly important event for Prince Harry as he has been involved in the project since its inception.

After watching some performances, Prince Harry and Ms. Markle heard from the young people themselves about the reconciliation work going on across Northern Ireland. pic.twitter.com/f9JHWU2d0j

Following the Amazing the Space event, the couple met with locals, visited the historic Crown Liquor Saloon, and had a tour around the Titanic centre in Belfast.