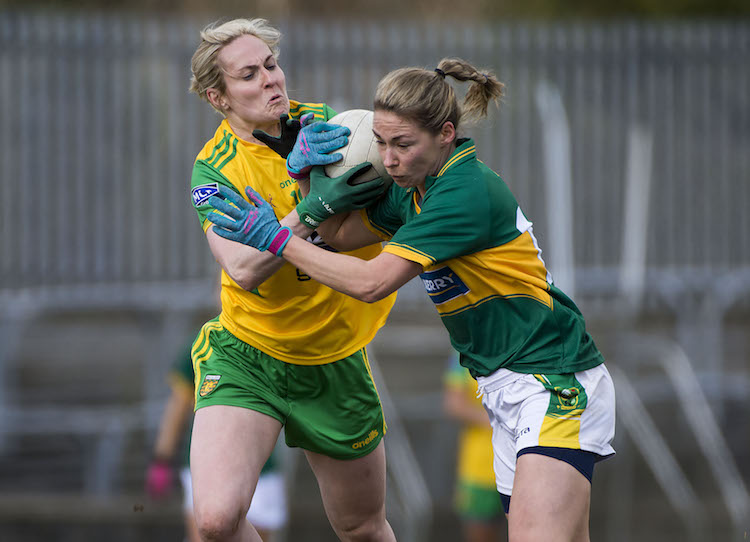 Donegal ladies were ruthless in their dispatch of Kerry as the Tir Chonaill women struck six goals in a one-sided rout.

Yvonne Bonner and Ciara Grant scored a brace each with Karen Guthrie and Sarah Jane McDonald also rattling the net.

A big crowd came in to lend their voice to the ladies, playing in a curtain-raiser for the senior men for the first time – and they didn’t disappoint with a lethal display.

The side managed by Maxi Curran and Damian Devaney had 20 points to spare by the time the referee called for the ball.

Bonner and Grant netted in the second half after Donegal had hit four majors in part one.

After leading 0-3 to 0-2 in the 11th minute, Kerry would score just once more in the first period with Donegal grabbing four goals, including three in a lethal five-minute spell that left Kerry at the foot of a mountain.

Grant, making her first start, slotted home after Geraldine McLaughlin was denied by Laura Fitzgerald in the 23rd minute.

The clearance fell to Grant and the Letterkenny woman made no mistake.

Katy Herron and McDonald added points to put Donegal 15 points in front at the changeover.

Donegal hit the game’s opening goal after 12 minutes as Guthrie rose strongly to bat to the net from Yvonne Bonner’s lofted ball into the danger zone. Guthrie timed her leap to perfection and got a fist to it, steering home.

That put Donegal in front after two Sarah Houlihan frees had put Kerry ahead.

After Eilish O’Leary opened the scoring for the Kingdom, Guthrie restored parity with a splendid free from the right-hand side.

Guthrie turned provider for Geraldine McLaughlin after making a powerful incision and the Donegal ace could have goaled, but her shot was turned over by Kerry goalkeeper Laura Fitzgerald.

Those three goals in five minutes had Donegal out of sight by the internal – when they led 4-7 to 0-4.

Donegal included Ciara Hegarty, Niamh Hegarty, Bonner and Guthrie, all of whom had been on the recent TG4 Ladies GAA All-Star trip to Bangkok, while there was a first start for former Republic of Ireland international Grant.

Roisin McCafferty, an All-Ireland winner with Termon as an outfield player, who is now with St John’s in Liverpool, began in goal, making her the fourth ‘keeper used by Donegal this campaign after Aoife McColgan, Laura Gallagher and Niamh Mailey.

A blistering start to the second half saw Donegal turn the screw. McLaughlin fed Bonner for a fifth goal after only 26 seconds and Grant bagged her second in the 43rd minute, firing in after a superb team move.

By then, it was only a matter of how many Donegal would win by in a comfortable triumph.